Why can't I use a 12 V DC power supply, voltage divided to get a 9 V drop across a resistor, to power a 9 V DC motor? [duplicate]

Ask Question
Asked 6 days ago
Active 6 days ago
Viewed 68 times
0
\$\begingroup\$
This question already has answers here:
When would I use a voltage regulator vs voltage divider? (4 answers)
Closed 6 days ago.

I have a 12 V DC power supply and a 9 V DC motor available to me. I want to use the 12 V power supply to power the 9 V motor, and I expected I could do this with voltage division.

There is a circuit diagram, I was connecting the motor between nodes labelled 'A' and 'B'. 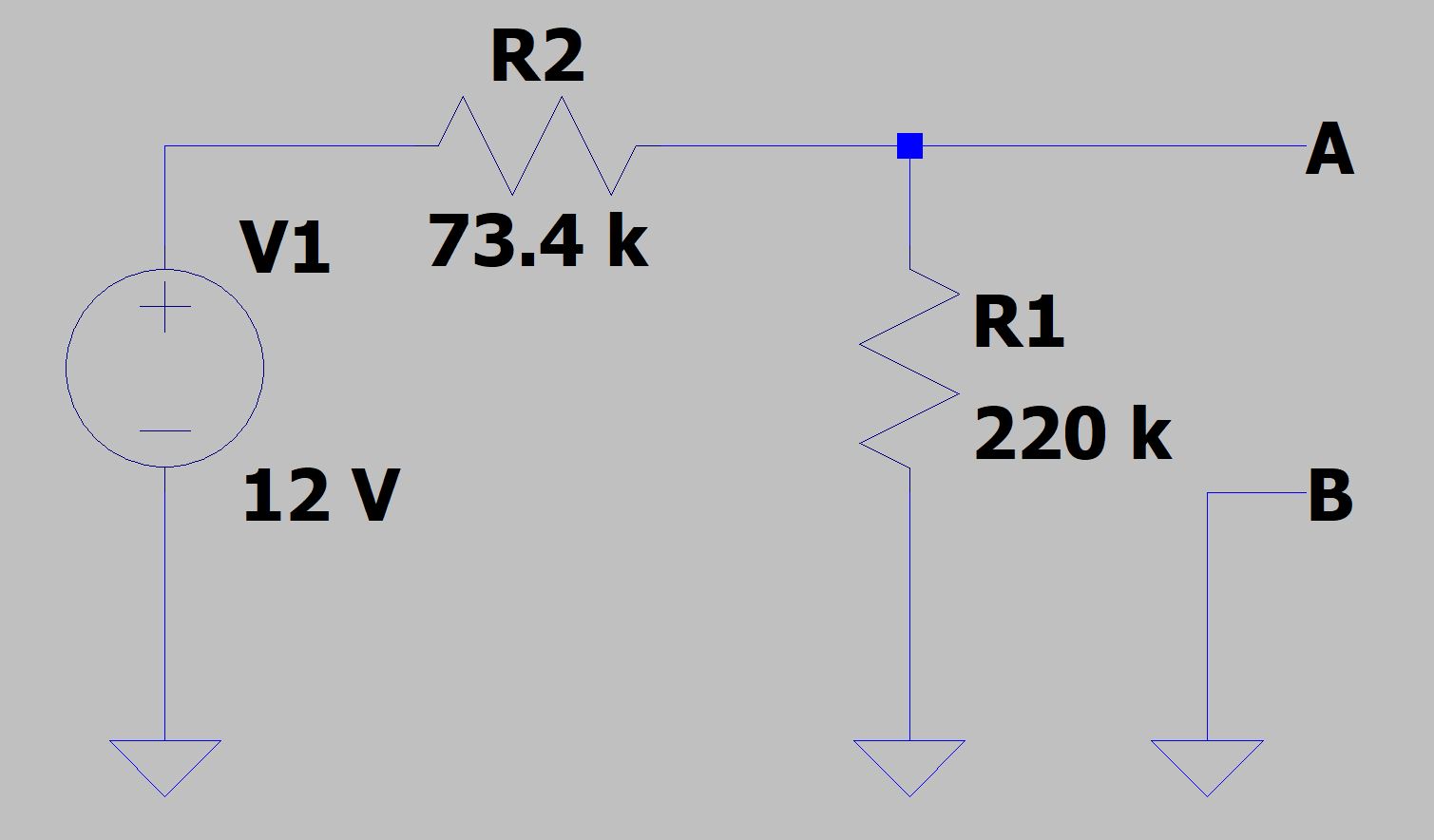 KaraLTKaraLT
1122 bronze badges
New contributor
KaraLT is a new contributor to this site. Take care in asking for clarification, commenting, and answering. Check out our Code of Conduct.
\$\endgroup\$
10
|  Show 5 more comments

A resistor divider does deliver a voltage similar to the one you desire, just like you say and found out. But it also presents a series resistance, too. That series resistance then stands in the way of your motor.

Here's a circuit that is the equivalent to your constructed circuit:

It's that inserted equivalent resistor that is preventing the motor from running.

The value for the equivalent series resistor (\$R_1\$ above) is just the parallel equivalent of the two resistors you used in the divider. You could redesign the resistor values to get a lower value. But then you'd also be wasting more power and may have to buy physically larger resistors. In general, you don't get to win this game. It's almost always a losing proposition. Especially when discussing motors.

The next step up in complexity is to use a BJT so that the effective resistance is driven down. It looks something like this:

BJTs have something called \$\beta\$ ('beta') that boosts the current compliance (more capable of supplying current to the load.) Put another way, the circuit above with the NPN BJT can be mentally replaced with the first circuit I mentioned above, but where the value of \$R_1\$ is divided by approximately \$\beta\$. And since modern values of \$\beta\$ can be quite large (in the hundreds), the equivalent series resistance is far lower than without the BJT in place.

Doing this allows the actual resistor divider to concentrate on the job of setting the voltage you want without excessively wasting power, while allowing the NPN BJT to pass along a lot more current if the motor requires it. It's slices up the job into two parts, handing off one part to the resistors, just as you already knew about, and handing off the other part -- delivering current that bypasses those resistors -- to the BJT.

(A small note. The design voltage for the resistor divider in this BJT circuit needs to account for the small base-emitter voltage of the BJT -- likely less than one volt -- setting a slightly higher target voltage for the divider so that the desired motor voltage is achieved.)

Will just one BJT be enough? I've no idea. All I've done here is to extend your idea by adding just one part to improve it. Likely, the situation may require still more thought.

You've said nothing much about the motor, itself. If it is a toy motor, then even a relatively small BJT may be able to handle the job. But if it is a treadmill motor, then you are in for a much more complicated circuit.

Not the answer you're looking for? Browse other questions tagged dc-motor voltage-divider or ask your own question.

45
When would I use a voltage regulator vs voltage divider?

0
24V H-Bridge DC motor, why voltage drop to 3v if motor connected
0
Can I use 12V voltage regulator and a variable 0 to 30V DC power supply to control my 12V DC motor speed?
2
DC Motor giving poor output waveform - how do I fix?
4
Driving DC motor using a single MOSFET, why does the motor spin without applying a gate voltage?
7
How Do I Limit My Motor Current While Maintaining Voltage Drop Across It?
1
Why is the voltage across a Zener diode so dependent on current?
0
Voltage drop across a resistor
2
Power supply for toothbrush motor