How does this oscillator work in radio transmitter?

I have a hard time understanding how the oscillator works in this circuit. The oscillator uses varicap diodes V1 to change the frequency of oscillation.

I don't understand where it does get enough phase shift to make it oscillate.

How to find the frequency of oscillation?

I have a hard time understanding how the oscillator works in this circuit. The oscillator uses varicap diodes V1 to change the frequency of oscillation.

It's a bog-standard common-collector Colpitts oscillator: -

But this circuit is very different from a standard Colpitts oscillator which uses two capacitors and an inductor.

No, it's a standard configuration of the common-collector Colpitts oscillator. It uses two capacitors and an inductor (C7, C8 and L) with V1 tweaking the net capacitance and producing frequency modulation.

In a standard Colpitts oscillator the gap between capacitors is grounded, while it's connected to resistor R8 here. Why?

No, there are three standard Colpitts BJT oscillators and you just haven't come across the common-collector version. Do some research on Google. An example: -

Image of the three standard Colpitts oscillators taken from here.

The tank isn't formed wholly that way. You need to do some research as to why it relies on C7 and C8 and, the varactor V1 modifies things to perform FM modulation.

No, there are three standards and, it appears, that you have only been previously introduced to one of them. All three produce a 180° phase shift.

I don't understand where it does get enough phase shift to make it oscillate.

How does this oscillator work in radio transmitter?

Study the theory behind the common-collector Colpitts oscillator first then, recognize that the voltage produced by the microphone will modulate the capacitance across the inductor (via the varicap diodes) and, from that, it's clear that this is a frequency modulator.

Q2 is just an RF amplifier. Please also note that it is likely to be illegal to use it. 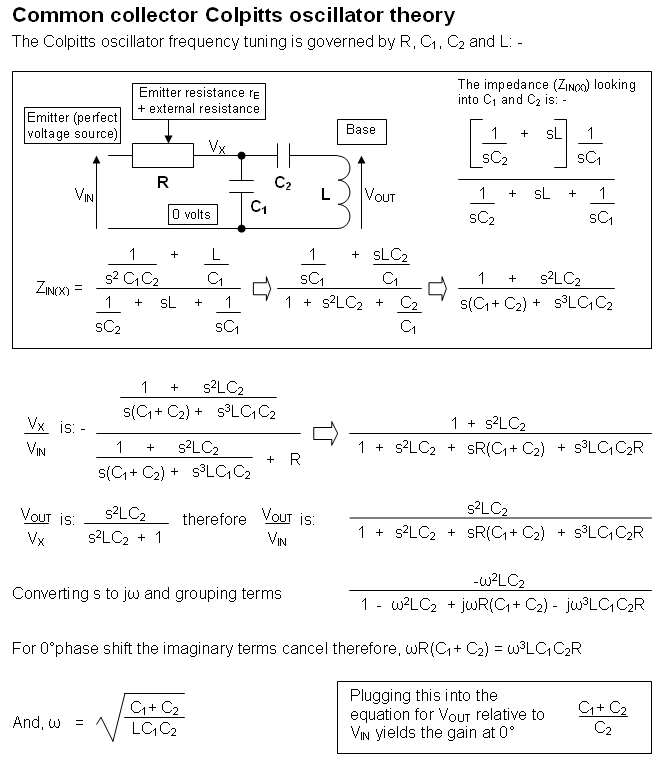 Simulation using BC547 - aiming for around 100 MHz 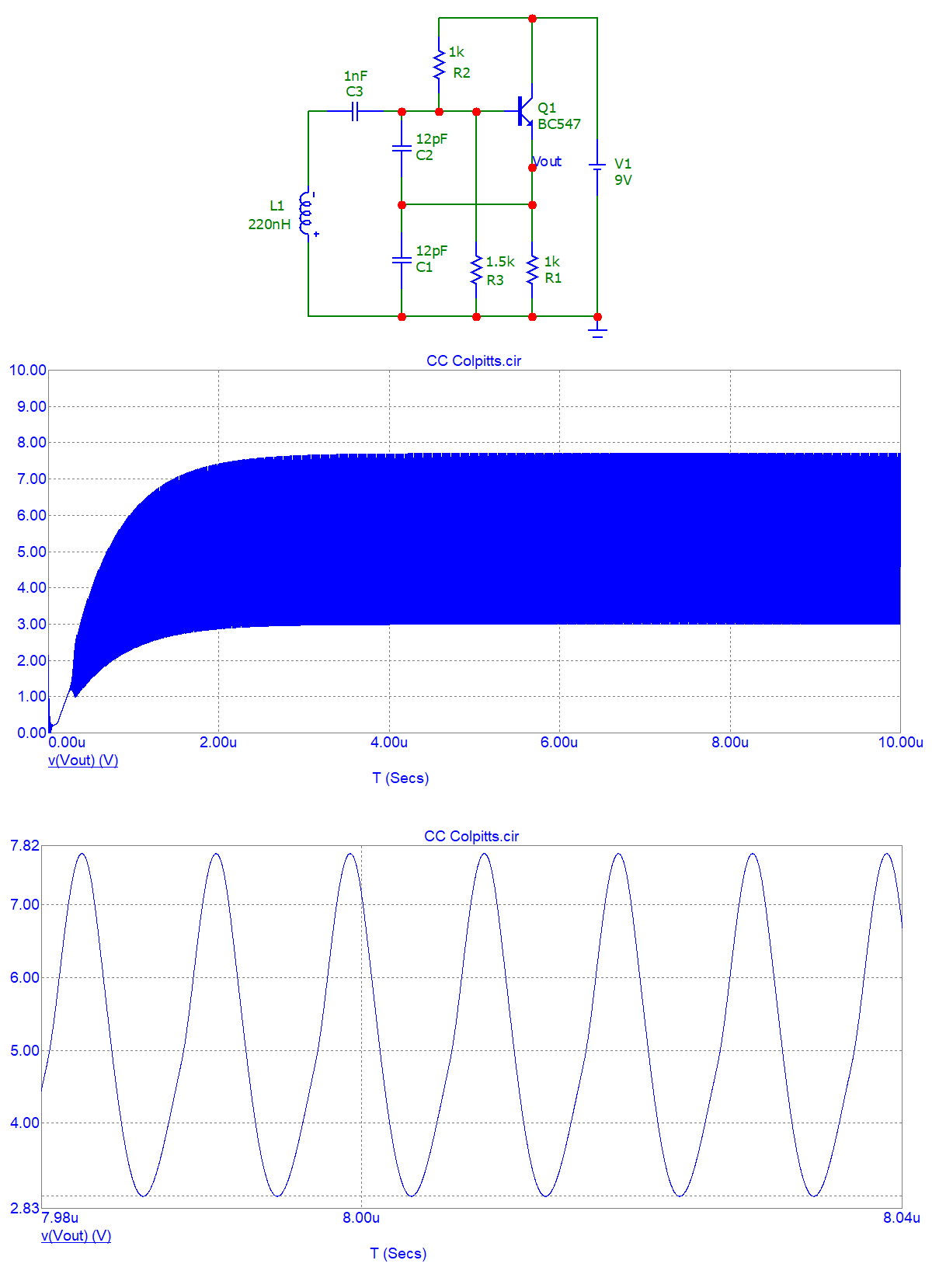 This is an awful lot like a standard Colpitts oscillator, you're just not thinking flexibly enough. To understand all the flavors of Colpitts, you need to first accept that "ground" is just an arbitrary thing that the designer chooses for convenience. At the core of any Colpitts is this*: 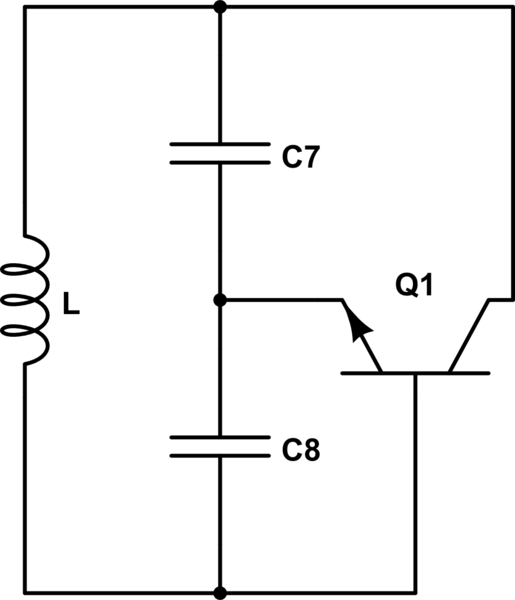 Note two things: first, ground isn't called out; second, there's no bias or power supply. To make this into a concrete Colpitts oscillator you first choose one of the transistor pins to ground, then you add bias and power.

In the case of this oscillator the collector is grounded for AC signals first because the power rail is ground for RF, and second because C6 carries the RF current from the collector to ground (and if the circuit is well laid out physically, will be close to Q1).

Make the thing actually work, R6, R7, and R8 bias the transistor into it's operating range, and R8 carries the emitter current to ground. C5 is added to prevent the coil, L, from shorting the base to ground (you'll may find that C5 has a significantly higher capacitance than C7 and C8, but it doesn't have to be -- way higher means the designer wanted it to act like a short circuit at AC; lower means that the designer was purposely choosing its value to influence the resonant frequency).

If you ignore V1, that's it -- you have a basic common-emitter Colpitts oscillator. What V1 does is to add some capacitance across the coil. This capacitance shifts the resonance frequency of the tank downwards, and because V1 is voltage-variable, that frequency shift can be adjusted electronically.

I would expect that as long as Q1's \$f_T\$ is significantly higher than the circuit's design frequency, the actual frequency of oscillation will be roughly equal to the series combination of C5, C7 and C8 in parallel with the capacitance of V1, all resonating with the coil inductance.

* I'm pretty sure this treatment originally came to me from Wes Hayward's "Introduction to RF Circuit Design", ARRL 2000.

The oscillation happens at the frequency where the total phase shift of the amplifier and feedback circuit is exactly 360 degrees or its multiple- including zero degrees. The amp does not in this case invert the phase, but heavy capacitive load causes phase lag - tens of degrees. But the phase shift of the LC circuit cancels it and that happens near the resonant frequency of the LC circuit because the phase shift there depends steeply on the frequency. The resonance boosts voltage, so all what's needed for oscillation exist. It can be explored by simulating: 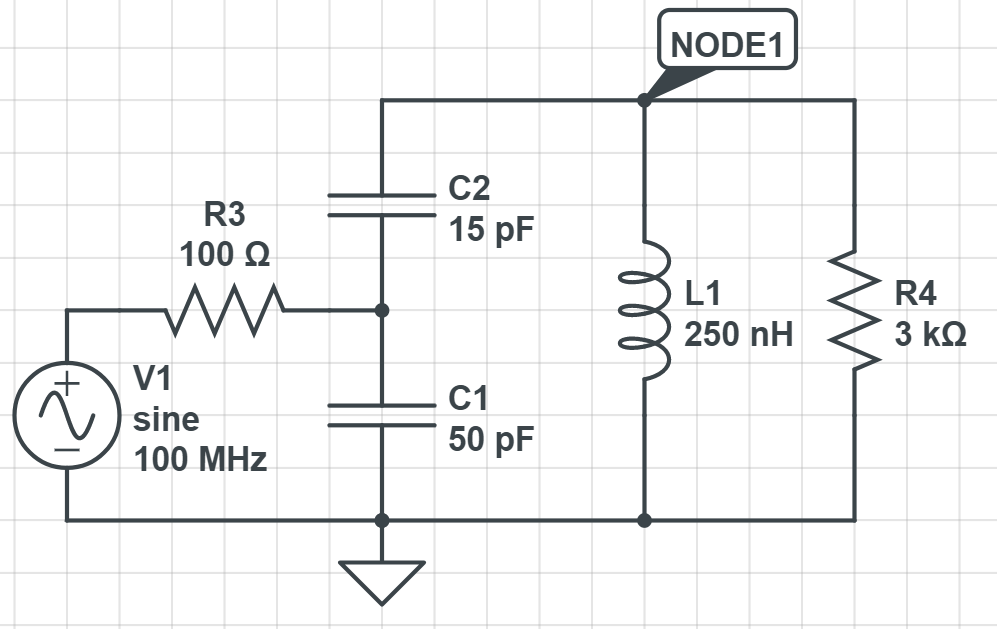 I guessed the output impedance of the emitter follower is 100 ohms and the total loading resistances of the LC circuit is 3 kOhm. The simulator didn't hit just the 0 degrees phase shift point, but quite near. We have a good reason to believe that there's some voltage boost at the 0-degrees total phase shift frequency.

BTW if a series of L and C is connected to a signal source which outputs near the resonant frequency signal, the voltages over the inductor and over the capacitor are higher than the output of the signal source assuming that there's not too much losses nor resistive loading. One can prove this easily with the common complex phasor calculus.

More exact simulation is possible by changing the emitter follower amp circuit in the place of my 100 Ohm resistor. The right transistor and the right DC biasing of it are important, because rf properties of transistors must be taken into the account in frequencies as low as 100MHz.

If one simulates in transient analysis mode the circuit with closed feedback loop he can see the oscillating frequency. It's as accurate as the part models in the simulation. We try it now: 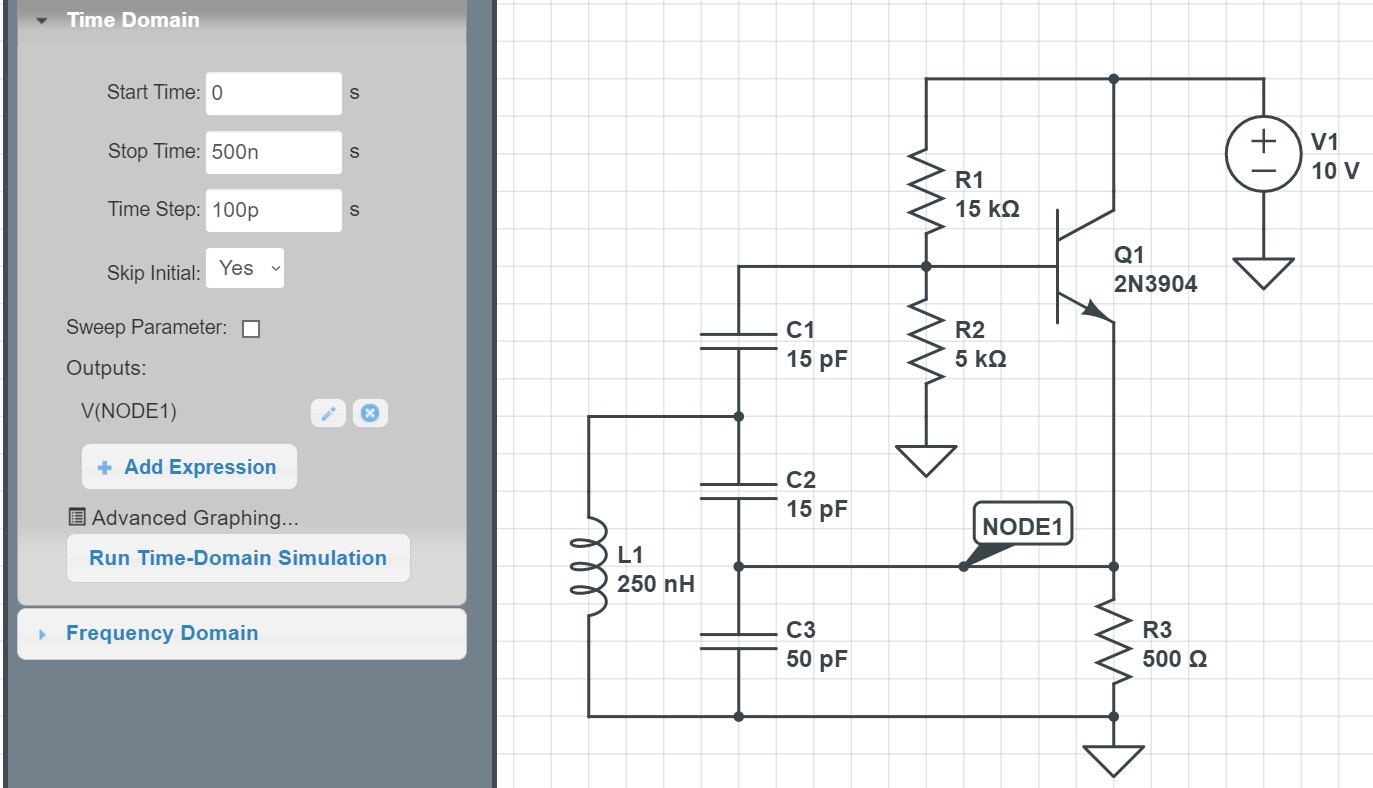 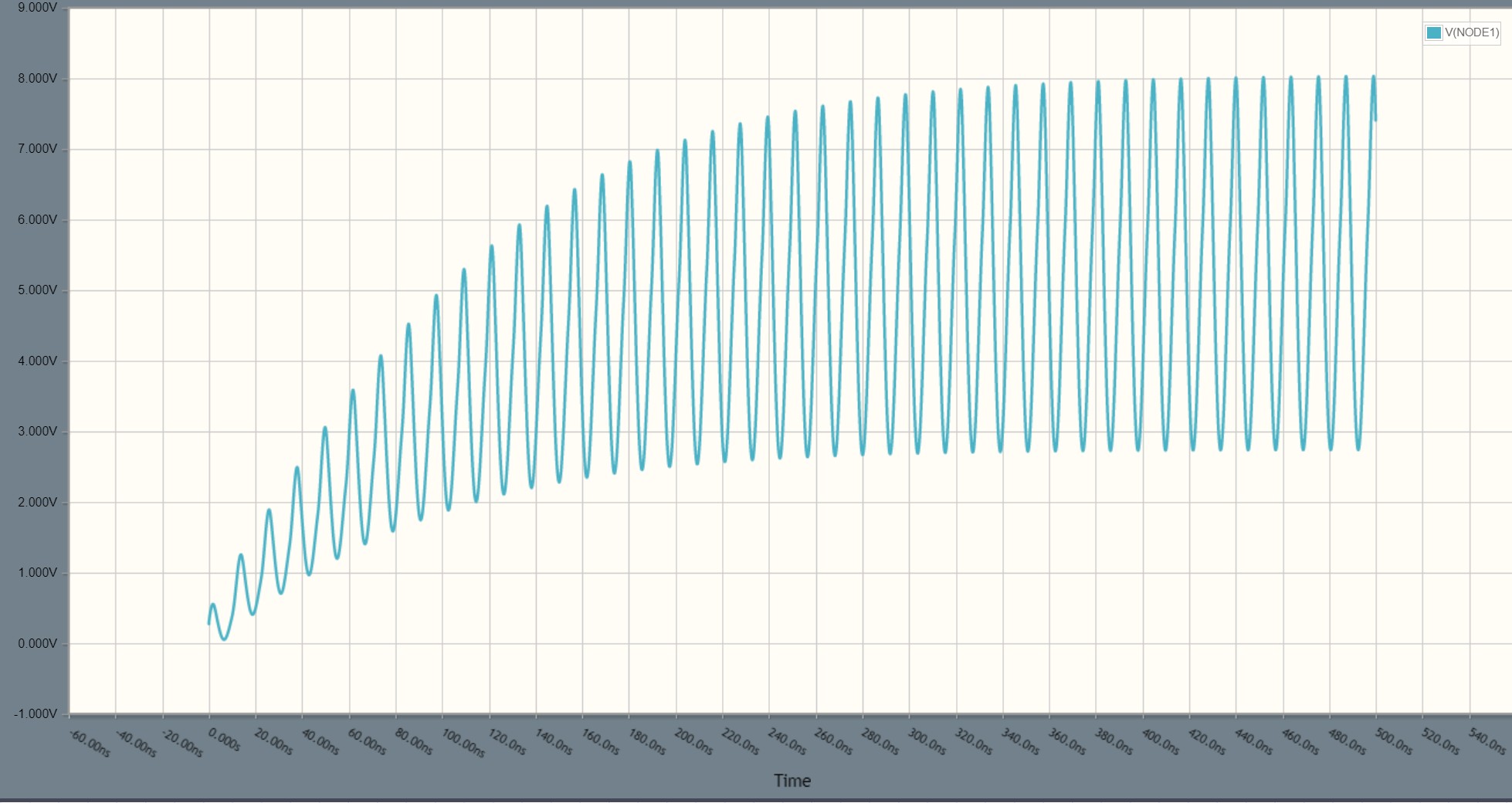 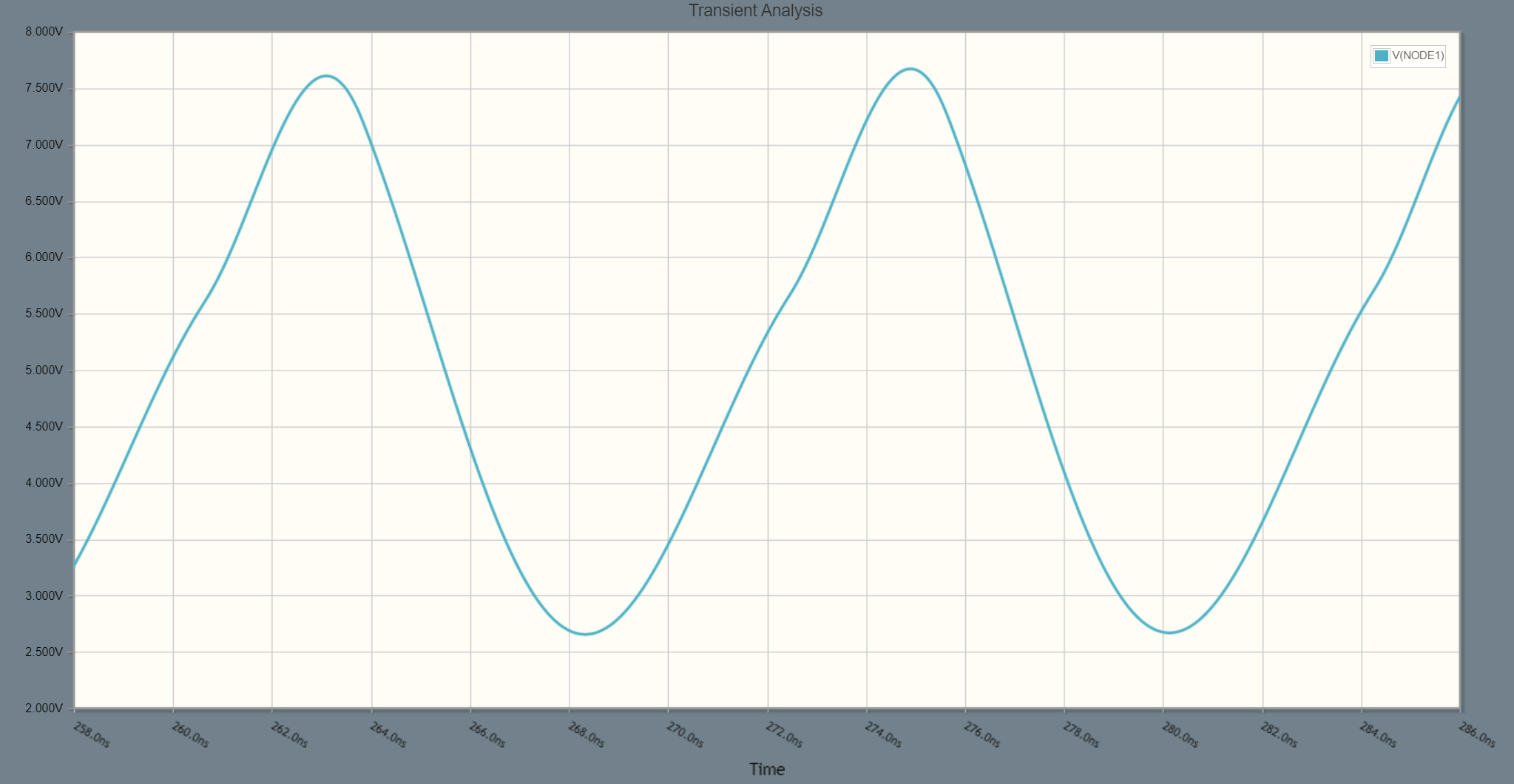 It oscillates, but the waveform is not so clean sine. That's because the oscillation amplitude grows as high as possible until the amp starts to distort badly. Better sine needs some more clever amplitude stabilization than distortion.

The frequency is about 91 MHz. It's 3MHz less than predicted in the idealized phase shift estimation. It's caused by the capacitance of the transistor and probably by the not so perfect guess of the output impedance of the amp. In addition the distortion in the amp makes all on linearity based things (for ex. the output impedance -concept) more or less false.

The oscillation frequency could be approximately calculated. As said, it's near the resonant frequency of the LC circuit.

Hobbyists have one especially annoying problem which in practice radically reduces the usefulness of exact radio frequency LC circuit calculations: They do not have any practical means to measure sub-uH inductors nor make one with beforehand known inductance. In theory one could measure the the resonant frequency with a known capacitor, but that needs high cost measuring equipment. A multimeter is not enough.

One practical possibility is to make the coil stretchable-squeezable and find the transmitter signal with a radio receiver. The frequency tuning range of the transmitter can easily fall outside the frequency range of an easy to get radio receiver, but making the coil mechanically adjustable by stretching and squeezing helps. If you aim to 88-105MHz band, use at first a coil which has 4...6 turns as a helix with 1/3 inch diameter and 1/10 inch space between the turns. The wire must be non-insulated and so thick that the coil keeps its form without any support.

How that can work? How an oscillator can work if its inductance is off? Answer: Oscillators can work even if they are not designed by using optimal principles. Optimal designs were a must in old days when the amplifying components were much less capable than today, say 100 years ago when there was available only low gain triode tubes or transistors in 1950's. Today transistors have so much gain that one may get his oscillator running at 100 MHz even with no calculations, only by remembering coarsely how big inductors and capacitors one has seen in working circuits (plus 100%, minus 50% accurately). Have a 10x higher frequency, say 1GHz. There nothing works without proper on theory based design.

C9 should be disconnected as long as you are not sure does it oscillate. If it oscillates it should be well detectable with no antenna at close distance. No rf amp = one possible source of errors less.

Not asked: There's an RF amplifier stage after the oscillator. In theory it should be harmless(see NOTE1), it only prevents the antenna causing tuning problems like they tend to do if they are connected directly to the oscillator. But without careful structure design it's well possible that you have a 2 stage oscillator which behaves in an unexpected way. For proper operation no feedback from the antenna side is allowed to the resonant circuit. It's possible that you must have some metal casing for the oscillator to keep off the feedback from the output.

Do not assume that this would work if it's built on a breadboard. The circuit doesn't stand the capacitances of the breadboard. All wires in the rf circuit should be kept as short as possible, say a half of an inch is the maximum.

NOTE1: with it one can insert (through the right matching circuit) an antenna that can make his transmitter audible at distances so long that the police arrives. It does not at all help that simple transmitters generate easily strong harmonics =>> you have jammed or used to your broadcasts a bunch of frequencies which are sold to others.

Not the answer you're looking for? Browse other questions tagged rf analog oscillator oscillation or ask your own question.