I was going through the tutorial in https://www.101computing.net/bbc-microbit-counter-using-a-7-segment-display/ using a 7-segment display I got from an electronics shop about 10 years ago. Everything works except that the signals are inverted.

The tutorial calls for a common-anode display. The common is connected to Vdd. 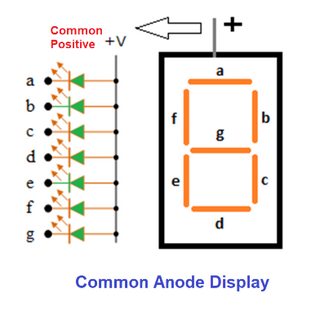 With a common-cathode display, the common would typically be grounded, and a high input (with a series resistor) would cause the LED to turn on.

There are various reasons to prefer one type over the other, mostly to do with the relative strength of drivers used. Usually, I find common-anode is preferable.

Not the answer you're looking for? Browse other questions tagged 7segmentdisplay or ask your own question.

0
Shift registers(?) failing after being left on a while
1
Improving my impulse counter circuit
0
How would I create this kind of circuit?
2
Display Double Digit Numbers on 2 seven segment displays
0
8-Bit Binary to BCD Decoding for Three 7-Segment Displays
0
7 segment display
2
Making a lock system with a 7-segment circuit
2
How to drive segment display and sens button press at the same time? Understanding this schematic
2
Help troubleshooting an unstable 595 shift register