Why does the resistance of a space heater decrease as it gets hot?

I came across something I find odd while hacking a space heater into a high power dummy load: my cheap space heater is rated 1.5 kW 110 VAC, so I expected to see less than 8 ohms which, when heating, would increase to about 8 ohms in steady-state with the fan ON.

Indeed, the resistance of copper increases with temperature - even if the resisting element is not made of copper, I assume most metals (except NTC) do the same in varying degrees.

I'm not familiar with US electrical supply, so I just assumed here the increased initial current is handled - otherwise there might have been some inrush control built-in.

After tearing it apart, which revealed the heating element was as expected directly connected to the supply, I measured the resistance at 50 ohms. Puzzled, I applied 30 V DC across the prongs and the current increased from 0.6 A to more than 3 A in a matter of minutes. Without suprise, the resistance had gone down with heating to about 10 ohms. The fan wasn't on, it's not an universal motor but an AC machine.

Am I forgetting something fundamental or isn't it a bit odd that the resistance decreases with temperature like NTC resistors? If not, what kind of material does that?

There are few types of heating elements used in space heaters, all with their peculiarities.

It has more or less constant resistance between room temperature and working temperture (600 ... 1000K)

Modern carbon mesh heaters are similar in electrical behavior, but rather expensive.

When cold, they have 3-5 times lower resistance. Their resistance is more or lesss proportional to the temperature, just like in most pure metals. When powered on, the wire heats up quickly so they don't trip the breaker by their inrush current.

These are rather complex.

When cold, they have 3x-5x higher resistance.

When powered on, they heat up to like 400K and their resistance gets at minimum (rated power).

When cooling is restricted and the temperature goes up, their resistance sharply increases. This supposedly makes them safer. This also allows some power regulation by adjusting only the fan speed.

I don't really know how the ceramic heating elements implement this complex behavior, but one can imagine a mixture of NTC and PTC substances and/or a phase change that makes the substance non-conductive.

In essence, these ceramic heaters are the worst choice in regard to making a constant resistance dump load out of them.

Get a kanthal-based, convection-driven space heater instead. You will get more or less stable resistance without the need to control a fan.

Silicon carbide and similar IR heating elements are semiconductors and have a negative temperature coefficient. Image from here 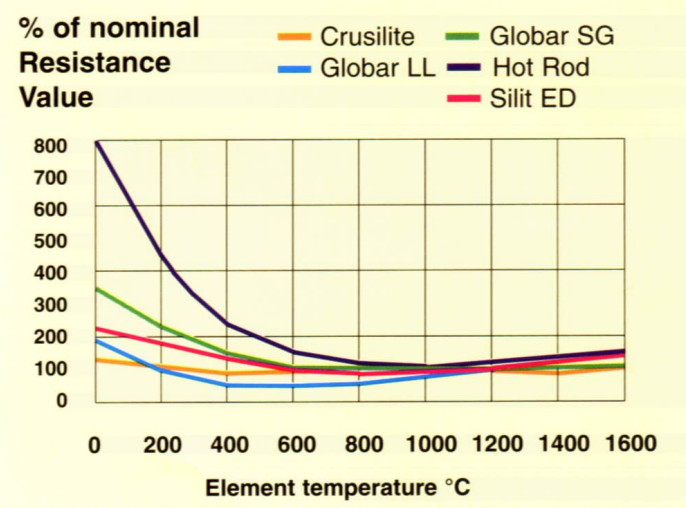 For a resistor, you can partly handle this by giving the resistor good thermal conductance, so that it heats up evenly. For a long thin bit of wire suspended in air or in a vacuum, that's not possible.

So space heaters (and light globes) are made with Negative Temperature Co-efficient materials. That's just the way it is.

Not the answer you're looking for? Browse other questions tagged power dc resistance or ask your own question.