What could prevent the start of MCU

I've got accassional starup issues on some boards with an ATmega2561. On about 10% (seems to fluctuate a lot!) the Processor does not seem to start on first power on. Only a power cycle lets the MCU start. I've researched online and tried different things. I made several hypothesis and tested them but I have been able to disporove all of them. I've checked the Datasheet several times but could not find any clue as to what I could be doing wrong.

The Problem shows itself in the following way:

If I switch off the power for >3 Minutes the problem appears again. If a Board has the problem it's perfectly reproducible. Replacing the MCU solves the problem. I've also checked the Power. MCU runs at 5V. The 5V switches on within a few microseconds and is rock solid stable (checked with Oszilloscope and Multimeter in Min/Max-Setting)

Also: I CAN programm the MCU via ISP if it is in that hung state

So, it seems I'm out of ideas. What's more: This board has a bootloader which I use to load an application. If there is a valid application the bootloader immediately starts the app in it's first line of code. The problem exists independently of state. It does not start into bootloader nor application. So if it's not a hardware issue it must be software. But the only thing common between application and bootloader is basically one line of C-Code (that calls a few functions to read from EEPROM and FLASH to check if a valid application is installed)...

Anyone has an Idea on how to tackle this problem? Could it be a software issue? Buth than, why does it not happen on all the MCUs?

As suggested in the comments I've measured AVcc in relation to Vcc during Power on. 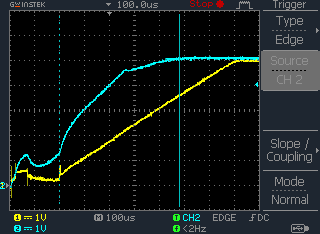 Channel 1 (yellow) is Vcc, Cannel 2 (cyan) is Aref And there seems to be the Problem! Aref (and also AVcc) is rising much faster than Vcc.

SOLVED! (at least it seems) Adding a resistor in front of the LM7805 that creates the Aref and AVcc to limit the current (and therefore charge the capacitors slower) brought the AVcc on after Vcc and now a Board that had the problem boots normally. Thanks everyone! 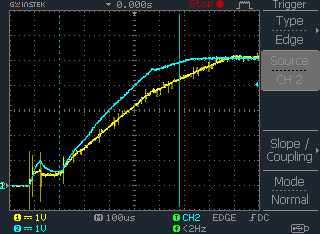 The usual suspects here would be:

How you power the MCU can be the source of problems.

Applying voltages to IO pins and AREF pin before main digital VCC and analog AVCC supplies are applied means that protection diodes from IO pins to supplies have to conduct input clamping current to supply pins, which puts extra stress to internal MCU structures and might raise the supply voltages and power on the MCU with voltages lower than expected. MCU might end up in some unexpected internal state where it does not run properly even after a reset pulse. One such problem might be a latch-up condition, which does get solved only by removing power from circuit.

The updated question shows that AVCC and VCC have about 1V difference between them during supply rise time, so their difference exceeds the safe limits of 300mV.

How are you identifying "not starting up"? What else is on the board with the MCUs? Is there anything that would stall the MCU if it was too slow powering up? Perhaps another IC that the MCU is expecting to respond to a serial message?

Because if there is the, most likely culprit is software.

All that needs to happen is for an MCU that starts up a little bit faster to be paired with auxilliary components that start up just a little bit slower.

Make your MCU code wait a bit after on power up before it actually starts doing anything.

Not the answer you're looking for? Browse other questions tagged microcontroller atmega2561 startup-issues or ask your own question.

2
Power cycle error when trying to program/debug HCS08 MCU
0
Software/Hardware Reset of MCU sometimes makes 24 Bit External ADC conversion goes wrong in Tiva C series
4
Using unused pins on an MCU to ease routing
0
Problem with the reset circuit for a MCU
0
Why there is a high inrush current when the microcontroller start-up(CC430f5137 from TI)?
1
How ST-Link RESETS the MCU by using Reset pin? How to connect Boot0 pin when it is not used and SWD interface is used?
1
Is it generally OK to ignore the current in and out of a MCU pin when analyzing circuit external to the MCU?
0
Program STM32 MCU with SWD by default as alternate function
7
BJT To Prevent Debug UART Backfeeding PCB?