Pull-up and pull-down resistor on one trace

Does it ever make sense to have both a pull-up and a pull-down resistor on the same trace?

Rule 7-20: The backplane shall implement a 5% 220-ohm pull-up resistors to 3.3V_AUX and a 1.8K-ohm pull-down to ground on the SYSRESET* signal, or the Thévenin equivalent implementation, located at each end of the backplane.

Am I reading it right? Is it asking for both a pull-up and a pull-down on the same signal? Does this only make sense because the pull-down is a way higher resistance? What is the advantage of doing this instead of just having a pull-down?

Yes, but one of the resistors is much smaller than the other. This has the effect of pulling SYSRESET* up to ~3V if 3.3V_AUX is present and down to ground in its absence.

This is a common solution to use 2 resistors in an array or use a single voltage to the Thevenin Threshold or for differential signals with the effective parallel resistance and a voltage divider.

Other: Although this is a primitive question, designing for OpenVPX beyond 10 Gbps is very non-trivial and choice of dielectric loss tangent and smaller layer thickness to achieve lower Zo with 3 mil tracks and laser vias in pads is quite non-trivial.

There is more than meets the eye to backplane design > 10 Gbps. 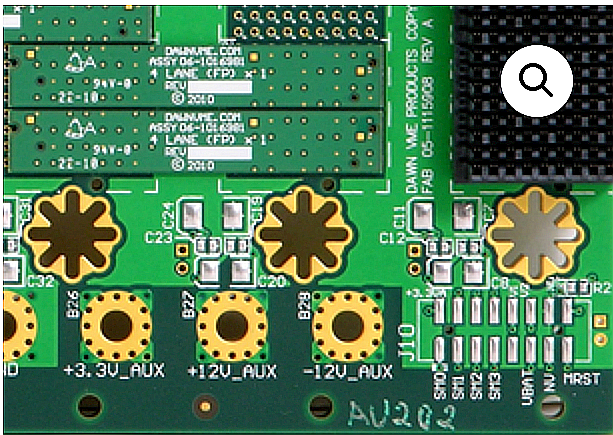 Note: There is a ground plane with a small gap around each rectangular isolated pad for J10.

The two resistor technique (pull up/pull down) is useful when 1) You're trying to terminate a signal line in it's characteristic impedance but 2) your driver does not have the strength to drive a trace terminated in, say 50 or 75 ohms to GND.

In that case, a pull up of 110 ohms and a pull down of 220 ohms would give you a thevenin equivalent termination of around 75 ohms, which in many instances would be OK, even with a 50 ohm trace.

Not the answer you're looking for? Browse other questions tagged pcb-design pullup pulldown or ask your own question.