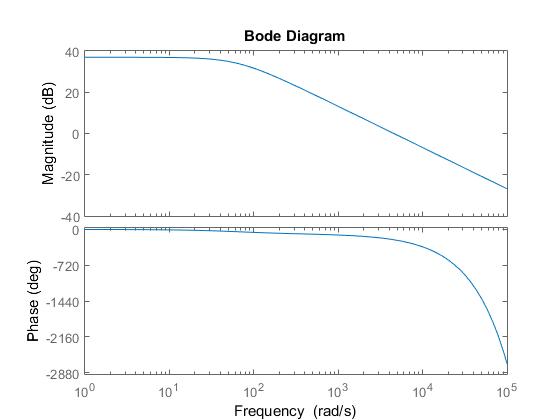 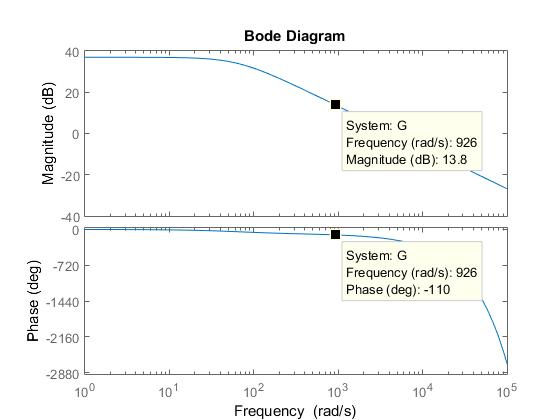 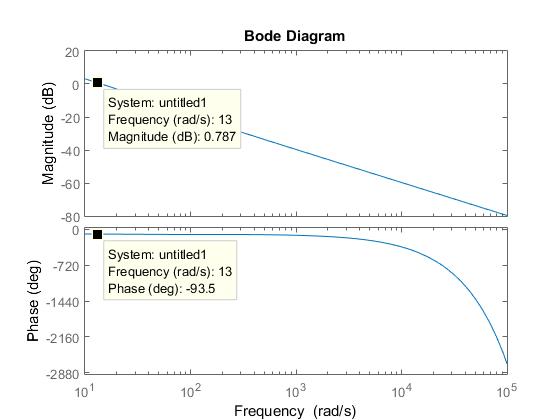 and I have found that the crossover frequency has been substantially reduced in respect to the designed value \$\omega_c = 926\,rad\cdot s^{-1}\$. It means that I haven't fullfilled the requirement regarding the speed of response which is given by the \$\omega_{BW} = 691\,rad\cdot s^{-1}\$.

It seems to me that the problem is in the inappropriate selection of the breakpoint \$\omega = \frac{1}{T_i}\$ location. I think that I should take into account also the breakpoint of the integrator at \$\omega = 1\,rad\cdot s^{-1}\$.

Can anybody give me an advice how to proceed in the design of PI controller in my case? Thanks in advance for any suggestions.

I'm not sure what your thoughts were during the design process so I can't comment on them, apart from that it looks reasonable. However, this is what I would do if I were to design a controller. 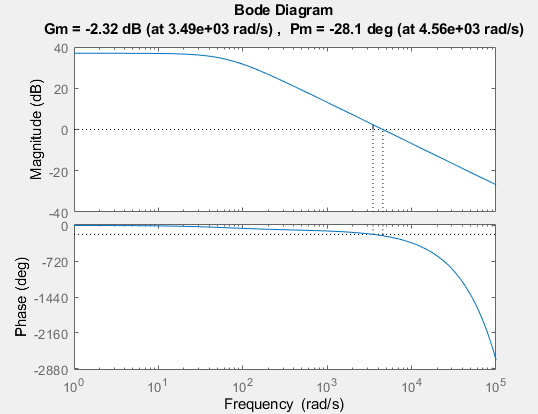 This is a nice Bode Plot, but ideally we want the magnitude response to be a linearly decreasing curve. For this we can use an I-term. 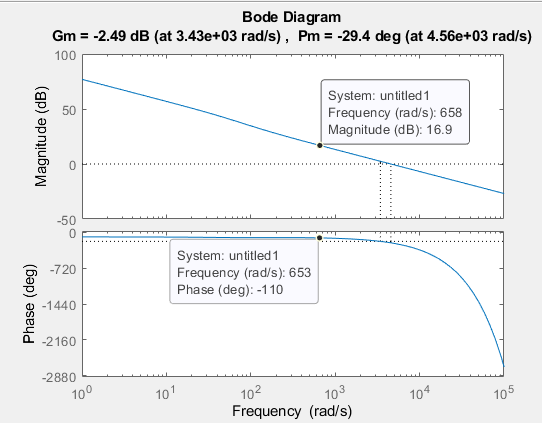 We see a wide bandwidth and large phase margin from the Bode Plot. We also see a very nice step response.

Sure. I chose \$\omega_i = 100\text{rad/s}\$ because I want a strictly linear decreasing magnitude response (gain response). An I-term raises the gain of the low frequencies. \$\omega_i\$ is the frequency where you want your I-term to "stop" increasing the gain. If this happens at around \$\omega = 100\text{rad/s}\$ then we get a nice magnitude response for your system with the controller implemented. 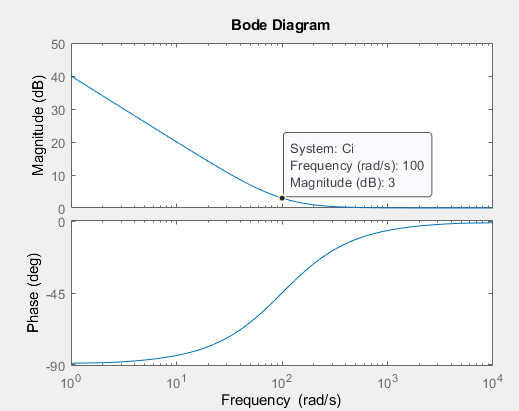 Designers are usually not comfortable dealing with \$k_i\$ and \$k_p\$ (or \$k_d\$) coefficients when it comes down to stabilizing a system. The vast majority of them - and me in particular : ) deal with poles and zeroes placement, specifically positioned to force crossover at the desired frequency with the proper phase margin. I have rewritten the original expression to plot it in Mathcad: 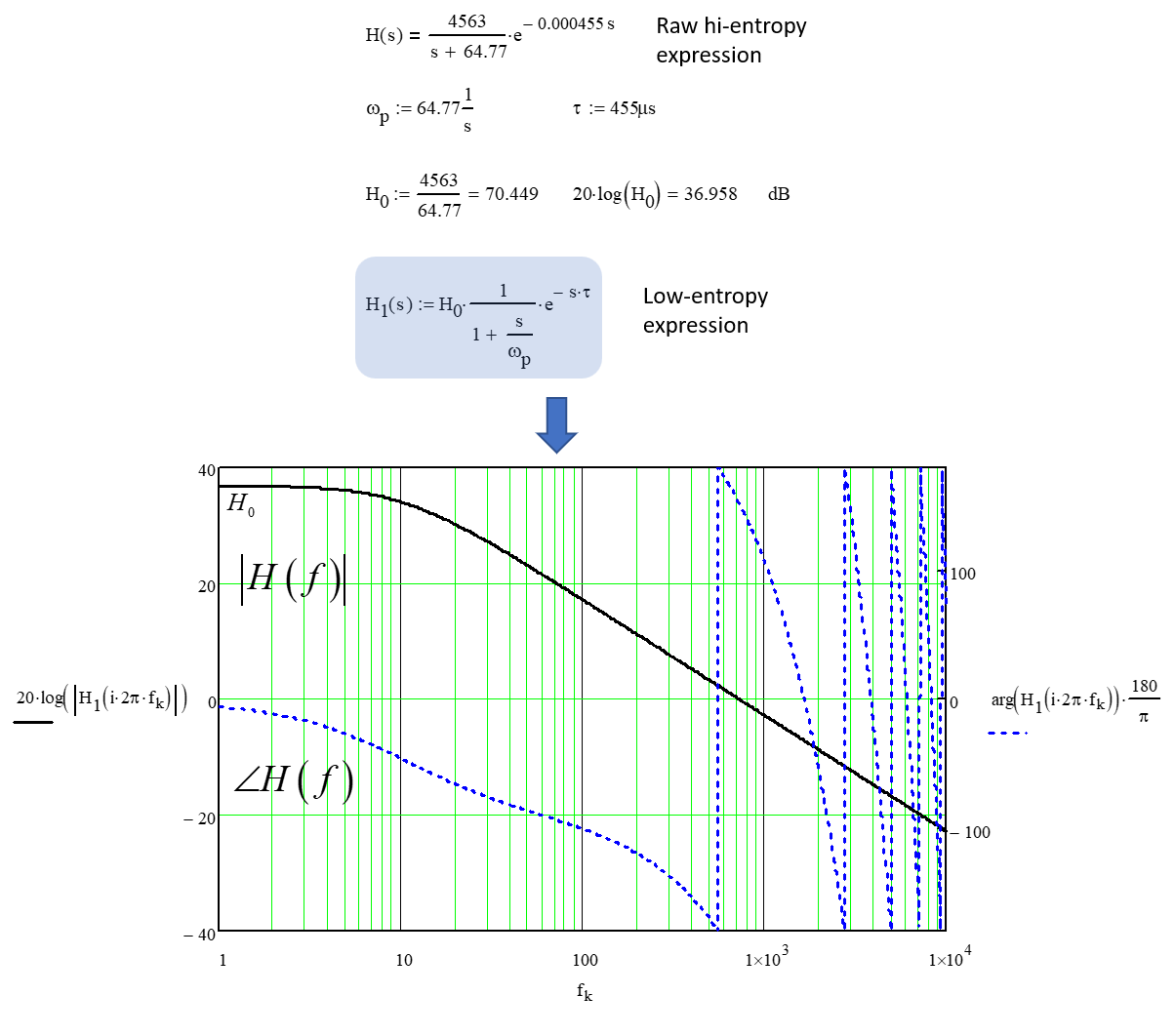 Then I determine the magnitude and phase lag of that transfer function at the considered crossover frequency:

From these results, I will know how the compensator must be tailored to force crossover and bring adequate phase boost to meet the phase margin criterion. In your case, a PI compensator relates to a type 2a compensator featuring a pole at the origin for high dc gain and a zero. However, if you exactly want a 70° PM and not more, you will need an extra pole bringing down the phase boost created by the zero: the compensator becomes a type 2. The calculation steps are here: 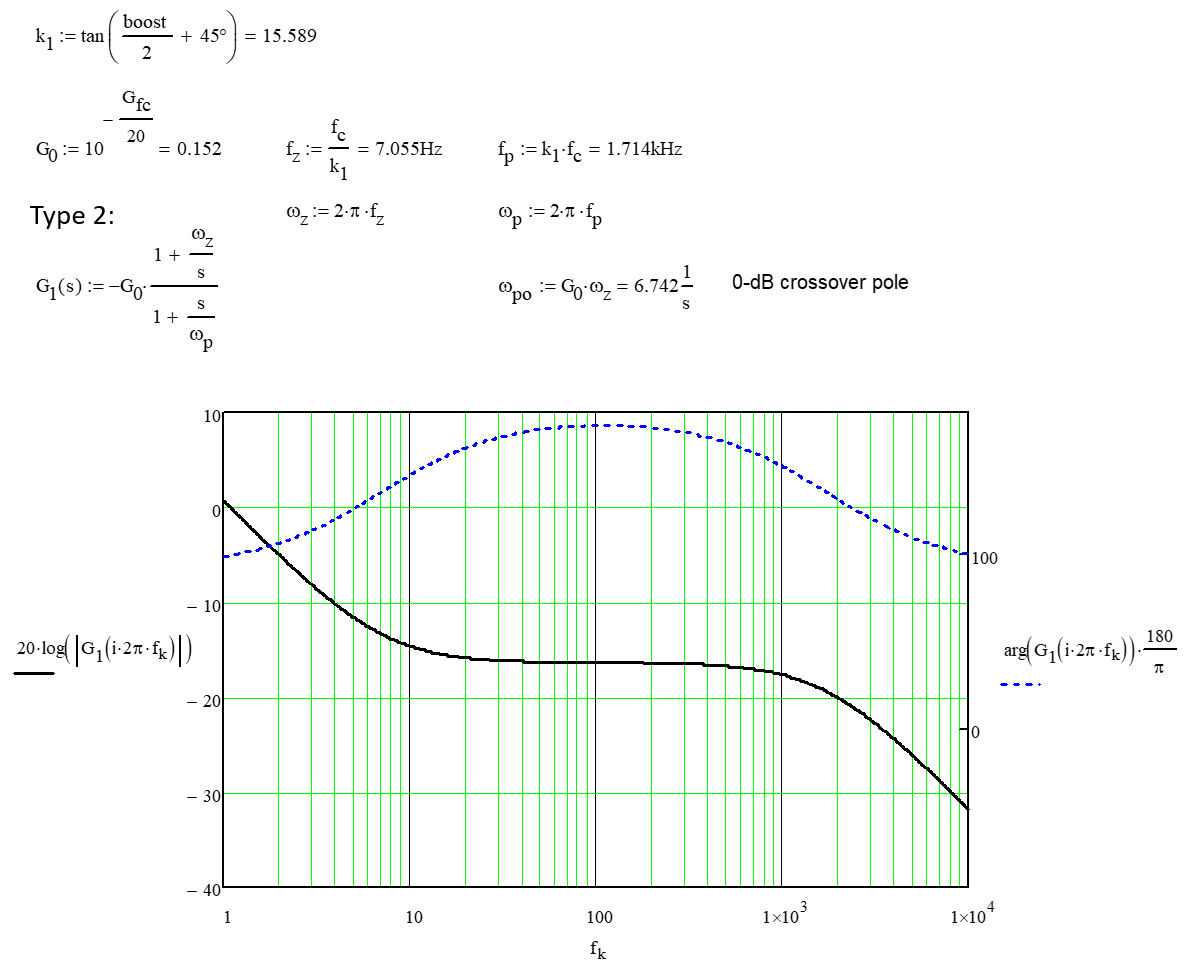 And if you now multiply this transfer function with that of your process, we have this: 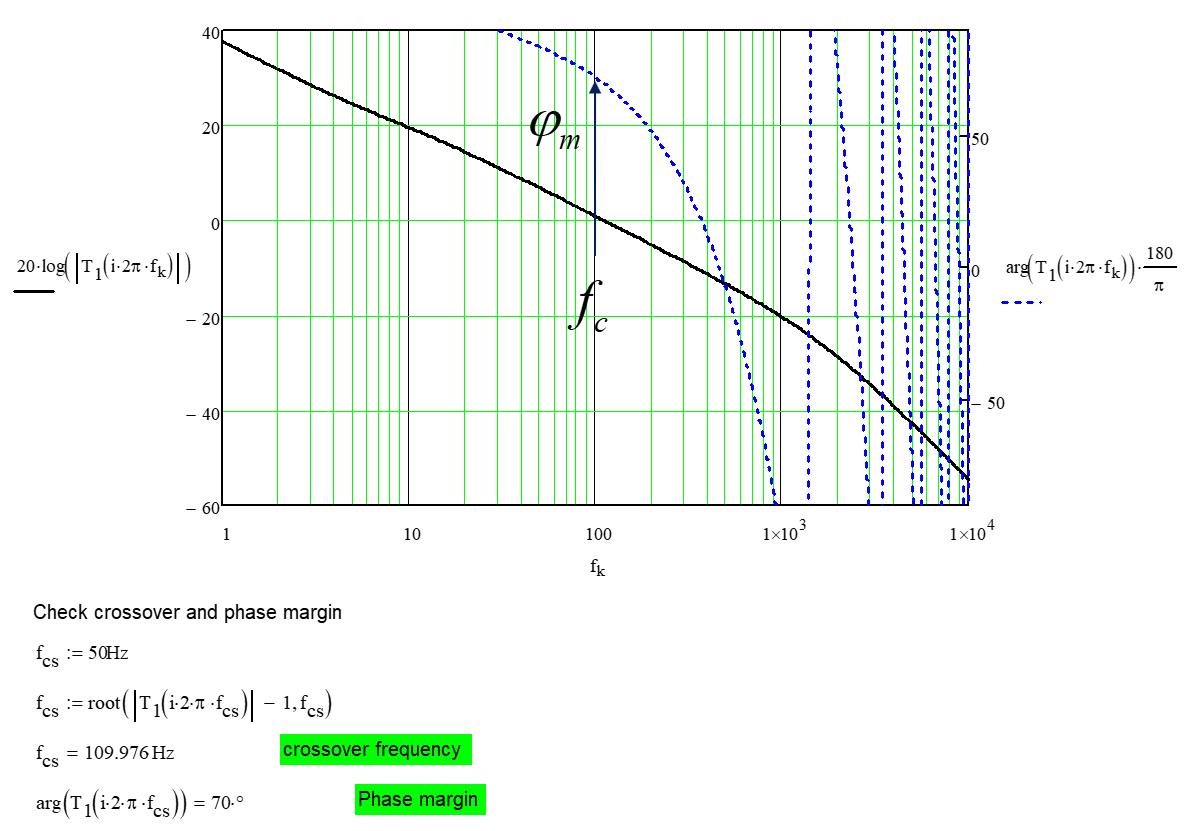 If I now convert these elements (except the pole) in \$\tau_i\$ and \$k_p\$ values following calculations from my blue book, you have: 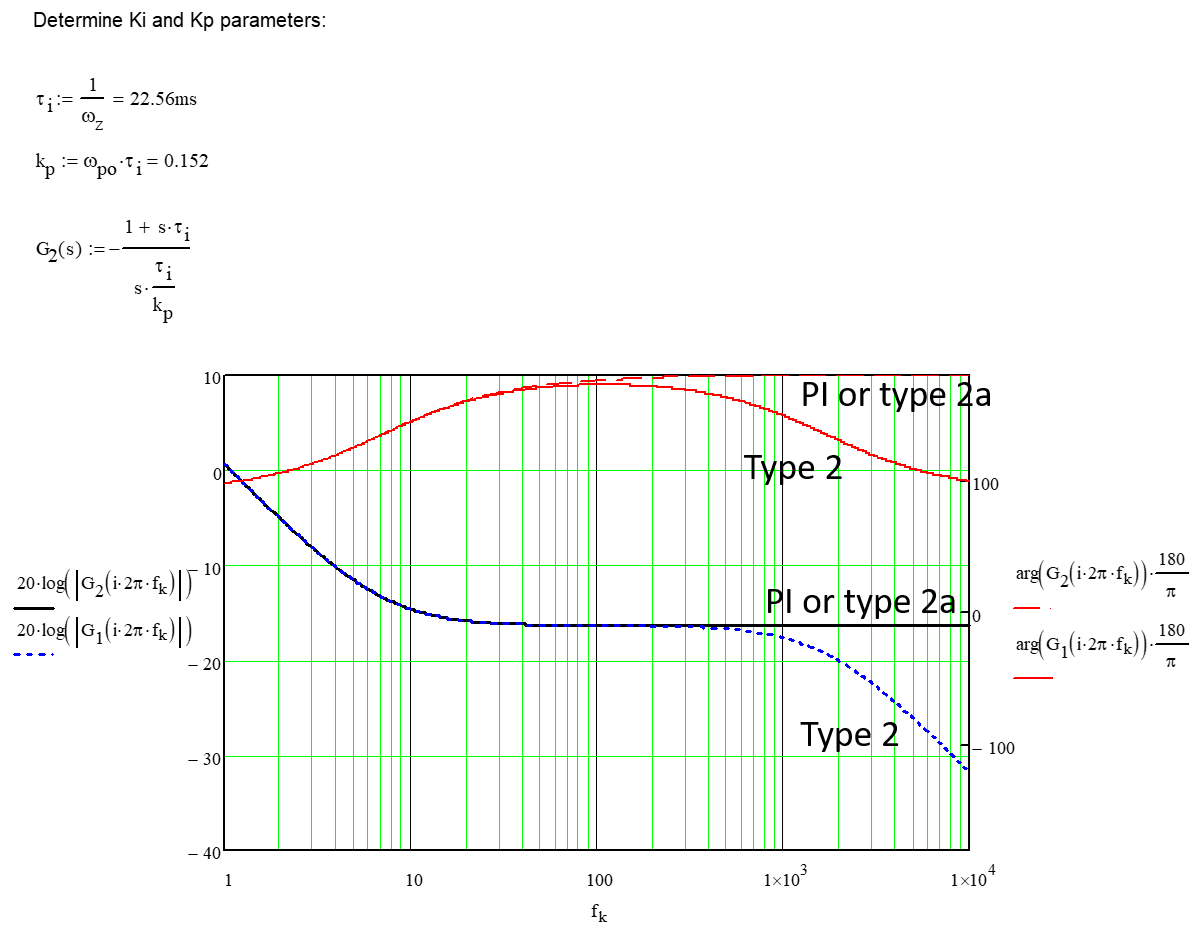 and you see how the two compensators slightly differ in terms of responses: the type 2 properly rolls off the gain at high frequency and will ensure a good noise immunity with improved gain margin. It also exactly tailors the phase boost to what is needed with the extra pole what the PI can't do since it does not bring a pole. As a result, the phase margin is not exactly meeting the target of 70° once the second compensator is involved to compensate the process: 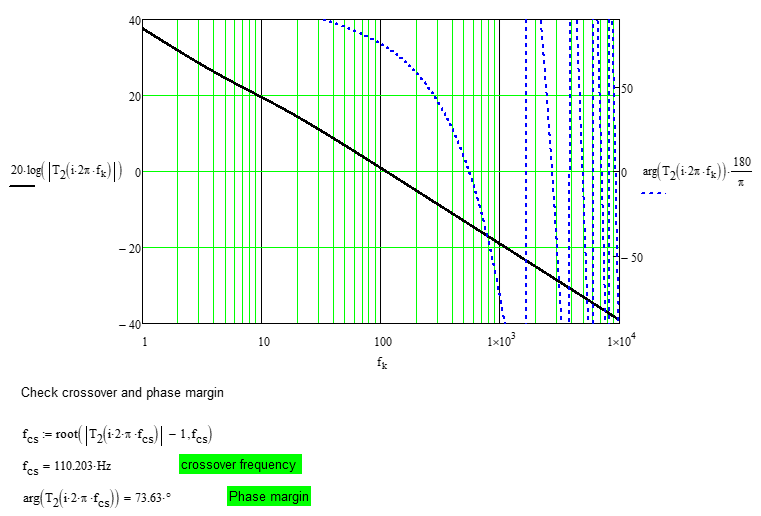 Nevertheless, this is meeting the target. A similar methodology can be applied to a filtered PID compensator which once supplemented with an extra pole becomes a type 3 compensator.

Not the answer you're looking for? Browse other questions tagged control-system transfer-function pid-controller bode-plot frequency-response or ask your own question.

3
Designing a PI controller for my power system
0
Analysing system response in the time domain from Bode plot (intuition)
1
Bode diagram of a single complex pole and under-damped system
0
Design of Butterworth high-pass filter
0
Bode plot of circuit with unknown values
3
Finding the bandwidth of second order lowpass filter
0
How to calculate the phase margin from Bode Plot if only the phase angle corresponds to the pole frequencies are given?
0
How to design PI controllers for two cascaded control loops?