I have an Ultrasonic Humidifier that I use to humidify my shop. I have to fill its 2-gallon tank daily which is becoming a nuisance. Rather than connecting it to a larger tank, I have opted to automate the process.

I have two liquid level switches (seen here) which can be set up for NO or NC operation depending on whether it is facing up or down.

Based on my limited knowledge and the research I have done, I need to construct a logical OR gate using transistors (like this one.)

Am I on the right track so far?

What you want is more than a gate. A gate is combinatorial, meaning that its output is simply a function of its inputs. It has no memory. Whenever you have the same inputs, you'll always have the same output.

But your requirement is different. When the tank is half empty, and one switch is on, and one is off, should the tank be filling or not? Answer, it depends. This cannot be achieved with a simple gate.

What you need is a Set Reset Latch (SR-Latch). This latch is made from two gates wired together.

Now, you wouldn't bother to make this latch out of individual transistors. It would be simpler to buy a chip containing NOR gates, like the 4001 Quad NOR chip. These cost less than 50p. 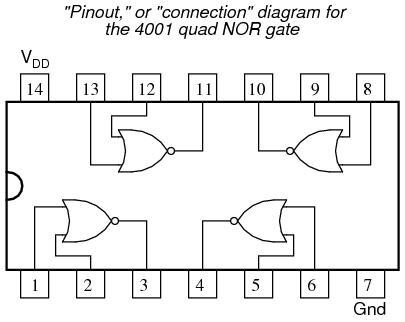 Alternatively, make it even easier. Buy a chip with an SR latch already on it, like the 74LS279:

This chip actually contains NAND based latches, rather than NOR based ones. The concept is the same, but the inputs are active low, rather than active high.

So how do you use the latch to switch a 120v AC valve? You certainly don't need to make a latch from 120v transistors! You can use a low voltage to switch any kind of high voltage or current, you just need the right kind of interface components.

You should use a relay to switch the high voltage, and a transistor to interface between the latch and the relay. See the answer to another question: How can i drive a 5v 120VAC 80mA with 15A contacts with a raspberry pi? for details about how to do that. There you will see a diagram. On the diagram, where is says 'GPIO', that's the signal from the output of your latch. Where it says L_COIL, that's the coil of your relay. You'll need a relay which can be energised with, say, 5v. But the contacts need to be rated for 120v AC.

I would use a single switch so that you don't need any electronics at all. I have almost the exact same problem, except in my case it's a sump pump in a bucket used for a sink in the basement that is below the waste water outflow pipe level. The pump gets turned on when the level reaches near the top and off when it gets near the bottom.

The switch came from a hardware store and was sold as a switch for sump pumps. I used a float in the bucket to push a threaded rod up and down with the level of the water. The float it a small glass jar with the rod thru its metal cap, held by a nut on either side. Two sets of back to back nuts are adjusted so that one flips the switch to on when the level gets high and the other to off when the level gets low. This has been working great for something like 20 years without me having to mess with it. In your case you'd mount the switch upside down from what I did so that it goes off when pushed high and on when low.

8
logical not circuit?
0
Minimization of Logical Equations
0
Broken NOR gate
2
Is this how logical operations and a computer work?
0
NOT gate with transistor
1
Is there software for automating logic design?
0
Filling PLA Programming Table
2
Finding the broken cicuit in an Xor Gate
0
Requesting help with a circuit design
1
Logical OR vs Logical Addition