Difference between phase and polarity?

Long story short, I did a bit of a career change, I'm now doing electrical engineering with an architecture firm instead of embedded systems. So I've jumped from the simple world of DC to the land of AC electronics and it's definitely different considering I never took a phasors class. Anyway, I'm really having difficulty understanding the differences between "phases" and "poles." I'm the type that needs a more concrete explanation than being tossed a copy of the NEC and told to read it (though I'm told that I'm supposedly doing fine and everybody else started from the same place or even worse).

I made this little table below based on what was dictated to me (not sure if it's accurate), but I'm really not understanding it. In embedded-land we're taught that red is hot, black is ground, and life is simple. Now everything is flipped; black is hot, ground only serves as a last-ditch protection mechanism, and "neutral" is used instead as a means of returning voltage to the source which might not be needed sometimes if powering a motor (i.e. HVAC equipment, water fountain chillers, hand dryers, etc.). Myself being me, I feel like a burden grilling into these questions because I was the kid in college who'd ask questions at nauseam.

The internet so far as been an OK resource explaining the basics between 3 phase and single phase. Things like the center-tap neutral to get 120V between hot and neutral and 240 between both hots make sense to me. I get the 120 degree phase differences in a 3-phase system, but again, nobody online seems to want to talk about polarity, and I'm totally lost on that. I THINK it has to do with the number of wires running though the cable (#poles/hots + neutral) but I really need a thorough explanation and the NEC is just a bunch of legalese at the moment.

By poles, I mean circuit breaker poles, not magnetic poles. And I didn't mean to say that neutral returns voltage, of course it returns current. I was rushing. 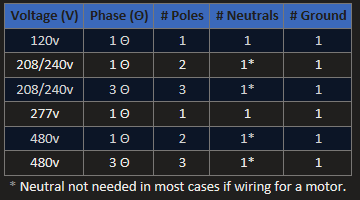 The first thing you have to get used to is that GND/Vss doesn't exist. There's a completely unrelated thing called earthing or safety grounding which is (as best possible) referenced to the dirt around your structure. It is a safety shield and never, ever carries current (except during fault conditions obviously).

Tying down the float

The problem with isolated systems is they can "float" to unreasonable voltages. Your 120/240V split-phase supply might come in at 4000V, 4120V and 4240V. That would break down insulation. So we also use the earthing system to "bias" the system to a sensible voltage above earth. You could use a car battery or a 1-volt transformer to create a bias, but a scrap of wire is cheap and has a 0-volt bias. You pick a live to be thus bonded to earth.

Once you do, you call it Neutral.

So "neutral" is a made-up concept.

All voltages are then referenced from neutral. 120/240V split-phase has neutral in the middle. So is it "+120V, 0V and -120V"? You might very well think that; I couldn't possibly comment. People will throw tomatoes at you if you try to label AC power with + and -. (even though it's right half the time, which is a better average than the tomato throwers LOL).

Usually, neutral is pegged in the middle (to minimize voltage of any wire). But on 3-phase "Delta" installations there isn't really a middle. So either a) a middle is synthesized; b) a corner is grounded making phase L1 neutral; or c) neutral is set halfway down a leg, typically in 240V "delta". Giving 120/240V split-phase down one leg, and a third "wild leg" which is 208V to neutral!

If you need to power something of a certain voltage, grab any two wires that have that voltage.

The nuts and bolts of physical installation have a book of rules (NEC in North America). A key rule is that if a wire is neutral, it doesn't need a circuit breaker and you don't (need to) switch that wire. (however if you do, it must have common trip with the live wires). That's pure economics - it's cheaper - but it depends on another rule: that every neutral serve only its partner non-neutral wire(s), and never any others. Thus, neutral is not like system common/GND on electronics.

And then you have the Philippines, where the old US installations have the neutral wire simply deleted by anti-colonial edict. There is no neutral. Every conductor needs circuit breaker protection.

What are poles, then?

Whth 120V/240V split-phase, the phases are 180 degrees apart so they're really just the same phase with a center-tap. Since they're not actually different phases, some people will throw tomatoes at you if you call them "phases". So we call them "poles".

Knowing the trigonometry equations for 3x 120 deg phase differences , you can look at this simulation. with Vmax = sqrt. (2) =1.414 times Vrms. to make sense of the voltage and power being the products of Line voltage and current relative to Neutral.

Difference between phase and polarity?

Polarity is a specific subset of phase. If two sinewaves are out of phase by 180° then they have opposite polarity; one is peak positive when the other is peak negative.

For 3 phase systems and voltages, the phase angle between sinewaves is 120° and it would be unwise to use the term polarity although, we can use the term opposite polarity if we want to invert one of the phase voltages by using a transformer (for example).

Now everything is flipped; black is hot, ground only serves as a last-ditch protection mechanism, and "neutral" is used instead as a means of returning voltage to the source which might not be needed sometimes if powering a motor (i.e. HVAC equipment, water fountain chillers, hand dryers, etc.).

Your table seems to be mostly correct. The breaker requires one pole for every hot wire. The word "polarity" doesn't apply and is not used to describe the number of poles on a circuit breaker. Poles and polarity are two entirely different things. The word poles is used for the number of magnetic poles in a motor, but polarity is not. The word polarity is used to describe which end of a winding is connected to which terminal in some situations.

208/240V, single phase is usually wired with a neutral in order to make 120V hot-to-neutral available. 208/240V is used primarily in residential and commercial occupancies and rarely in industrial occupancies except for in office areas. Some appliances have 4-wire plugs with 2 hot prongs, a neutral and a ground. In an appliance like a stove, 208 or 240 volts is connected to cooking elements and 120 volts is connected to lights and timers etc. A 240 volt baseboard heater may have just 2 wires because there is just a heating element with no electric timer. In that case it might be wired with a 2-wire plus ground cable that has one black and one white wire with both hot. I believe that is permitted by code as long as the white wire is painted or otherwise marked black at the ends.

208, 240 and 480 volt circuits need a neutral if they are feeders to boxes that provide single-phase 208/240-120 or 277 volt branch circuits. Equipment needing single phase line-to-neutral from a three-phase supply would be expected to be quite rare.

Not the answer you're looking for? Browse other questions tagged voltage ac polarity neutral nec or ask your own question.

7
AC polarity detection
1
How much current actually passes along household neutral?
31
AC: Why differentiate between Ground and Neutral?
2
How does a capacitor function in a 120V AC motor circuit?
2
Grounding conductor has a non-zero voltage (i.e. with respect to "true" ground). Why?
1
Why do I measure (almost) no voltage between 230V phase and my body?
2
AC Voltage: Wild Reading: phase-neutral & neutral-ground (240V/120V)
1
How does a single phase shared neutral circuit actually work, physically?
2
Trying to understand this electrical diagram schematic on an AC motor that I have, particularly symbol between yellow and black wires