What does a dashed rectangle and an encircled dot mean?

This is a battery charging circuit. The part I don't understand is the block on the lower right. What does that dashed rectangle mean, the ellipse around the resistor? and the encircled dots?

The datasheet is here. 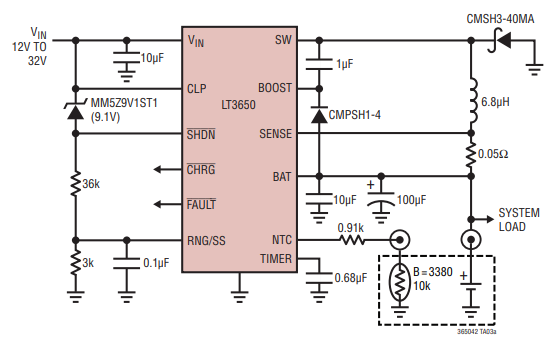 The dashed rectangle typically means a remote part, off-board, or removable. In context this is a battery charger for a removable battery pack, as you see in the description right above that typical application you screenshotted.

The resistor isn't a plain resistor. It's a NTC temperature sensor. Its resistance changes as the temperature does. Typically used as feedback of battery status. If it's too hot, it signals the charger to stop. See page 16 for how the NTC functions here.

And the encircled dots are jacks. Like RCA jacks. Just a simple connector. Typically that symbol is used for 2 conductors (center dot and the outer circle) but here it's been made a bit abstract.

What does that dashed rectangle mean

indicates that the parts shown inside are a single module

the ellipse around the resistor?

It means it's a thermister, a circle would indicate a photo-conductor

Being inside the box with the battery it's probably meant to be thermally connected, eg with aluminium tape.

and the encircled dots?

I'm guessing it indicates some sort of connector.

It is an accepted symbol for a coaxial connector, but here they are surely using it to mean single-wire a join. Odd.