confusion in RC circuit regarding initial conditions and capacitor voltage 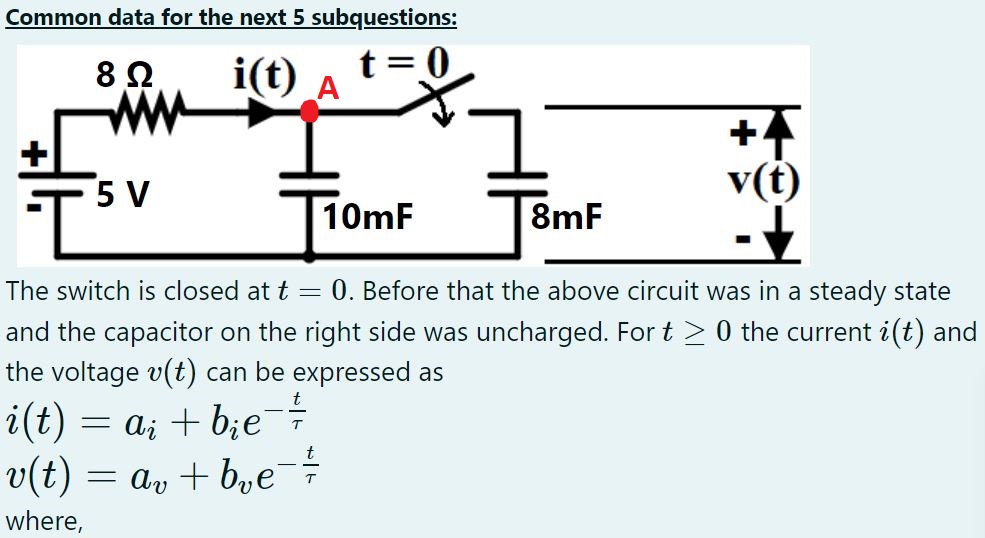 Actually i was practicing circuit analysis with Differential Equations. This question has some confusing parts like-

It would we be really helpful for me if someone will give me some hints or physical reasoning or teach me how to handle these types of circuit situation instead of Direct Answer.

Two capacitors in parallel is just one larger capacitor. Which will have the same total charge as before.

I hope it's obvious why voltage on two caps is the same when they're connected in parallel.

This charge distribution is valid strictly for time moment t=0, at t>0 the capacitors will be gaining extra charge via the resistor, where you have a typical RC-circuit, simply with starting condition that the capacitor is not at 0V. It will charge from V2 to 5V eventually. But I don't see explicit question about t>0, only about t=0.

Not the answer you're looking for? Browse other questions tagged circuit-analysis capacitor dc transient or ask your own question.

3
Finding the voltage across a inductor in a charged RLC-circuit
0
Diode capacitor circuit, what is the output across the diode?
0
The phase of voltage across a resistor in a RC circuit when the frequency of input tends to zero
1
Initial Conditions and Parallel Resonant Circuit Problem
0
Calculating capacitor voltage with initial conditions in an RC circuit
1
Output voltage of capacitor discharged in other capacitor?