I own a motorbike that runs with a 6V (yes, 6V) electric system and I'm designing some LED lamps for it. My current design is dead simple, here is a falstad simulation, it's just two 1W 2.5V drop LEDs in series with a current limiting resistor.

The bike's electric system consists of an alternator outputting presumably some ACish waveform that gets somewhat rectified and "regulated" to never exceed 6V but is not smoothed with capacitors at any point.

These lamps are for turn signals. The circuit that controls the intermitent blinking of the lights is an ancient thermal relay in series with the lamps that probably has some unknown voltage drop.

The thing is, when you accelerate the voltage in the system increases and when the bike is at idle, the voltage drops, this is obvious because you can see the lamps visibly get brighter, here is a short video I shot.

Now this is what I can't figure out. While measuring the voltage drop on the lamp, I'm just measuring around 1.6V, I'm doing this measurement with a TRUE RMS AC good quality multimeter (UNI-T UT 61E). Such a measurement should be impossible, since the LEDs have a voltage drop of 2.5V each (I measured both of them) and they are in series and they DO light up. While measuring in DC I get constantly changing voltages (expected.) 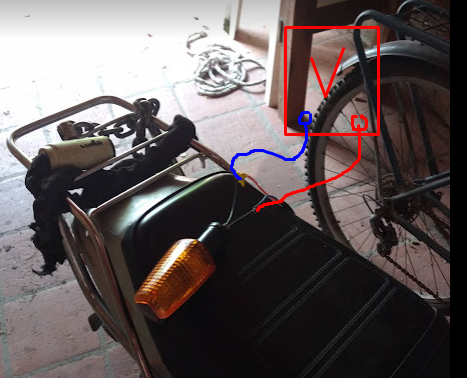 If I measure AC current with the true RMS multimeter the result is even more jarring. I get around 0.7A to 1.1 A depending on how much I turn the accelerator (yes I connected the multimeter in series with the LEDs.)

This is weird since the maximum current of those LEDs is around 300mA (1Watt rating with a voltage drop of 2.5V, and they are in series), meaning that if 1A were to circulate through them they should be terribly bright and hot to the touch, However they are cool to the touch and not that bright. Also the current-limiting resistor would never allow 0.7 amperes unless the voltage was much greater.

I'm confused, the multimeter is almost new and I have measured DC before with great results. Can anyone speculate what is going on?

I have no osciloscope to do any signal analysis.

The RMS is presumably low because the meter is measuring AC and may be discarding the DC component - some meters have an explicit AC+DC setting. The meter is doing its best to make sense if a waveform that’s 6V some of the time and zero at other times. The current reading is more of a mystery but I’d speculate that again it’s to do with the current not being AC - it’s not DC but certainly shouldn’t be alternating.

Not the answer you're looking for? Browse other questions tagged led current-measurement automotive multimeter voltage-measurement or ask your own question.