Can you use an inductor as a capacitor for high frequencies?

Inductors behave like capacitors at high frequencies. This is of course due to the parasitic capacitance taking over.

Now, would it be possible to use an inductor as a capacitor for high-frequency applications? I mean, we can't put them in parallel with Vcc and GND, because this would simply be a short for the DC component, but is there no other configuration that might take advantage of the fact that they have parasitic capacitance?

Is there something I am missing regarding the behavior at HF? This sort of makes me think of how the diverging part of rocket nozzles actually increases the velocity of supersonic flow even more (against all intuition of the undergraduate engineer)...

For example, see the pictures below: 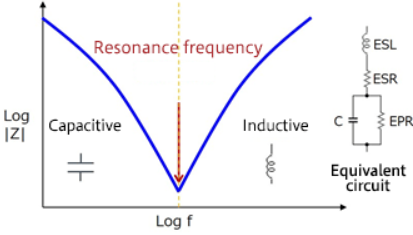 And so, isn't there perhaps a way that one could take advantage of that parasitic part, and have a desired response with an offset, like so:

In which \$f_c\$ is the frequency at which (in this case) an inductor would serve better as a capacitor, than a capacitor?

You could say the same thing about a capacitor - at very high frequencies, the equivalent series resistance and inductance becomes significant enough to change the slope of an impedance plot.

But in either case, is the parasitic component going to overwhelm the characteristic component to the point of being a substitute for a designed component? IOW, is capacitive reactance going to become so much larger than the inductive reactance that you can use the inductor as a capacitor? Almost certainly not, and absolutely not for the vast majority of applications. IMnsHO

Very bad design practice. Parasitics are characteristics that manufacturers try to reduce, so you can only rely on the major characteristics which are well defined as part of the specification.

Not the answer you're looking for? Browse other questions tagged capacitor rf inductor impedance high-frequency or ask your own question.

3
What does "frequency test" mean with regards to inductors?
6
Manufacturer doesn't list self resonant frequency
3
Modeling passive elements at high frequencies
4
Approaching an ideal inductor
4
Parasitic Capacitor current of an inductor
0
Passive Elements At high Frequency [parasitic effects]
2
Impedance frequency response
0
What is the change in voltage across an inductor, or change in current through a capacitor?
0
selecting the footprint size of ceramic capacitor for MCUs
1
Building intuition on the behavior of inductors and capacitors with both voltage and current