What exactly is the difference between a microphone signal and a speaker signal?

I want to make a simple cable to connect a PC speaker output to a microphone input. Does anyone have a good idea or circuit for doing this? 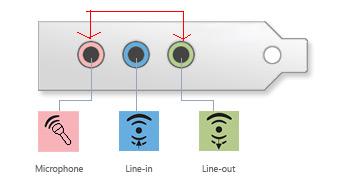 I want to transfer data with audio cable and a way to connect speaker output to microphone input. I found this circuit. Is it a good solution?

Better make R2 switchable or variable with 1k being the upper limit. But the basic approach is probably OK.

Speaker signals are relatively high voltage and relatively low impedance (meaning they can deliver a lot of current). What that means depends on the speaker; anything from a couple of volts and a fraction of an amp (total power 0.25 watts or so) for a little multimedia speaker up to tens of thousands of watts for an AC/DC gig...

So you need to attenuate the speaker output (reduce the voltage) to avoid overloading the microphone input. The circuit you provided will protect it from damage, but it might still overload enough to distort the input signal.

HOWEVER if you are referring to the coloured connectors shown, the green one is "Line Out" - 0.1 to 0.5V rms, not enough power to drive a speaker directly; a lot of PC speakers have amplifiers built in to work with this low level signal.

In that case your suggested circuit is fine, but there is a simpler approach : just connect "Line Out" (green) to the "Line In" (blue) on the other end; they use the same signal levels and need no circuitry in between.

Depending on the type of mic or amplifier/speaker system used, things vary, but a typical mic input may have an input impedance of at least 10kΩ, range from 0 to 1V, with typical input signals being a few tens of mV. Power levels can be a few uW.
Compared to this, a speaker output signal may have peaks of up to 20V and currents of a few amps. Power levels can be 100's of watts in a PA system, but in a typical computer speaker system between 2-10W is probably more likely. For example, with a nominal speaker impedance of 8Ω (it actually varies over frequency) 10V RMS in would equate to 10V / 8Ω = 1.25A, then 1.25A * 10V = 12.5W peak RMS power level (normally it will run quite a bit lower, music and the human ear has a huge dynamic range)
An example of a cheap amplifier IC you might see used in a computer speaker system is the 2 * 6W TDA1517. This has a maximum voltage of 18V and peak currents of up to 2.5A. Another very common low(er) power IC is the LM386.

Now since microphone inputs are usually voltage driven nowadays (i.e. the input is high impedance), all you need to worry about is making sure the voltage range is within the mic in's capability. An upper limit of around 1V is probably about right (electret mics have quite a high output compared to e.g. a pro condenser mic, and PC soundcards are generally quite rugged from what I have seen)
So you need to determine the peak output voltage of your speakers and adjust the divider accordingly - as Brian mentions, using a pot as the bottom half of the divider is a good idea so you can adjust as necessary.

Say your speaker system can output up to 20V, then you need a 20:1 divider. To allow for a lowish mic in input impedance the divider output impedance should ideally be 1kΩ or less. So in this case ideally you would use 19kΩ for the top half (20kΩ will do, you don't need to be too exact) and a 1kΩ pot for the bottom half (R2). This will give you a maximum output impedance of just less than 1kΩ to feed your mic in, and prevent the output signal rising above 1V.

So, yes, the circuit shown will probably do if you use a 1kΩ pot for R2. If the speaker system does output 20V, then even with the 11:1 divider shown, as long as you have the pot, you can adjust to prevent any clipping. It's likely if it's a computer speaker system then the speaker voltage won't be over 10V anyway, and the circuit shown (with the pot for R2 if you want to trim levels) will be just right.

When you connect the circuit, make sure the pot is turned right down, play some loud music (preferably a test wave but some heavily compressed pop music will do) and gradually turn the pot up until you get clipping (distortion) When this happens, turn it back down just a touch and leave it. If you change the input at some point, repeat the process.

EDIT - I just noticed your question edit that mentions transferring data via audio. If it's between two PC's, then as Brian says, just connecting the line out from one PC directly to the line in at the other PC makes life much simpler as the signal levels need no adjustment.

Not the answer you're looking for? Browse other questions tagged audio microphone speakers or ask your own question.

1
connect headphone to bluetooth module
3
matching input and output impedance in an audio circuit
2
How can I integrate microphone and speaker into my microcontroller project?
0
Driving line input of a speaker from a differential amplifier, why is the output clipped?
1
Monitor speaker volume from input lines
0
How to record a speaker?
0
Cannot connect microphone using audio jack
0
Speaker producing static noise