I have designed a PCB that I need to work in which a microcontroller drives a 24 V brushed motor. The input power to the board is 24 V, this is then lowered to 5 V by a step down converter, and this 5 V is then made "isolated" by an NTE0505. The isolated 5 V is used to power the microcontroller, RS485 communication and motor current sensing, while the 24 V and 5 V (not isolated) are used for the motor and its driver.

The PCB has 6 layers, all separated by dielectric, which are:

On the fifth layer (power plane) the non-isolated and isolated 5 V are routed, suitably separated from each other by planes that do not touch.

The second layer (ground plane) is a single layer on which only the ground vias of the isolated 5 V are routed.

The 24 V ground (defined as POWER GROUND) is positioned on the top layer and bottom layer, carried on the two layers with vias that cross all the layers (as well as the 24 V). The ground of the 5 V (not isolated) is the same as the 24 V and is also routed to the two outer layers.

My doubt is mainly related to the fact that there are two grounds, that of the 24 V and 5 V non-isolated (POWER GROUND) and that of the 5 V non-isolated: does it make sense not to have at least a portion of the ground plane for the POWER GROUND? What are the best techniques for the correct use of the ground plane in the case of having two supplies isolated from each other?

The vias used cross all 6 layers of the PCB from top to bottom layer, and only the designated vias "touch" the relative planes they are connected to.

Unfortunately for copyright reasons I cannot share schematics or PCBs.

This is the actual layer stack of the PCB: 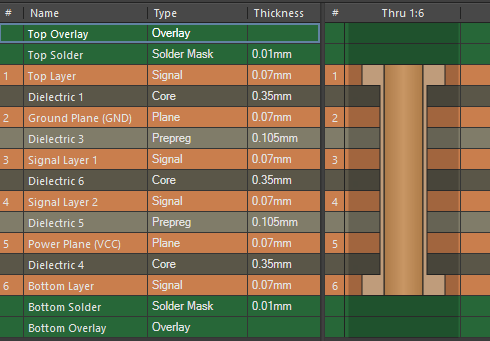 As you can see, there is only one type of vias which is used to cross all layers and which, depending on the connections, contacts the relevant layer for which it is used. The Ground Plane (GND) shown in the second layer refers to the ground of the isolated 5 V. My idea was to split this ground plane and also use it for the POWER GROUND used in the top layer and bottom layer as polygon pour, adding or replacing more vias like these below:

Does it make sense to split up the ground plane (so far only used for "isolated" ground) and use it for POWER GROUND as well?

For your question there is no general answer. Although I am trying to give some advises. But first some comment on your design.

What are the best techniques for the correct use of the ground plane in the case of having two supplies isolated from each other?

This is in general i difficult question. Keep in Mind that two floating potentials can drift apart. So it is always smart to have certain defined resistance between them. Better try to avoid that and use a common ground.

There are several thinks to keep in mind.

Not the answer you're looking for? Browse other questions tagged pcb-design ground-plane or ask your own question.