I'm designing a DC-DC buck converter and when looking at the inductor's datasheet, I noticed an image showing a restricted area underneath the inductor, between the pads. 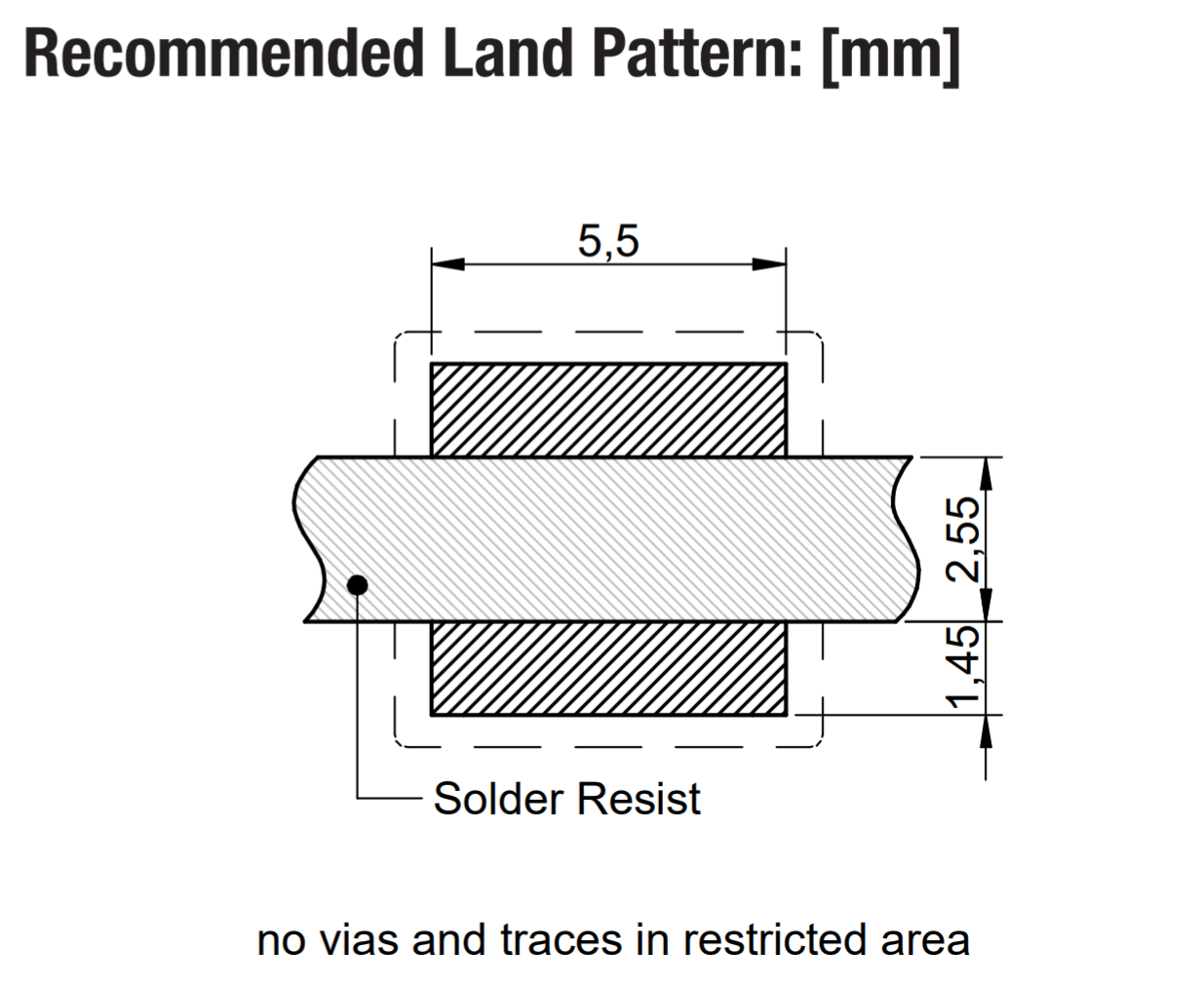 Presumably the dashed line (that's approximately 6.5mm) is the restricted area, and that covers the perimeter of the inductor, not just a pair of brackets [ ] around the pads.

I would generally avoid putting feedback/compensation/current sense traces between the pads, at least on the same layer, to reduce the risk of inductive pick up, but for a shielded inductor such as this, I might be a bit more willing to utilise the space, especially other layers.

It just so happens that on my current design, which is very restrained mechanically, I could really do with putting some ground stitching vias between a mid-plane and bottom copper - smack-bang in the middle between the pads. Note they would be through vias, not blind.

I don't recall seeing this keep-out area on other shielded inductors from different manufacturers such as Bourns or Abracon.

Should I change my views on this from rule-of-thumb to hard rule and convince the mech-eng to give me more space, or go for it and hope for the best?

I would say there isn't one straightforward answer, but I try to give a few hints/considerations and my personal assessment.

There are three main types of inductors (simplified):

From an EMI point of view I would say it is generally better to have a GND copper plane underneath it - this plane acts as a shield and protects nearby conductors (or inner layers) from picking up radiation. But keep in mind that the magnetic field gets disturbed and inductors properties are degraded (i.e. reduced inductance, ...). However, for shielded (semi-shielded) inductors this degradation is again way (a bit) less impacted.

Conclusion: If you are digging deep it gets complex but shielded type inductors are generally a little less critical to handle, which doesn't mean you don't have to think about what you're doing, but if it were my design, I'd try it with the GND vias mentioned underneath the inductor and have a good time working together with your colleagues from the mechanical engineering department ;).

I also see no risk with vias placed below regarding solder bridges with this type of inductor.

As a side note: Don't forget about the dot indicator (winding start) you'll find on many inductors. It tells you were the winding starts and you should connect this side close to the switching node (high dU/dt >> long traces would favor the antenna effect...)

Not the answer you're looking for? Browse other questions tagged pcb inductor via solder-mask or ask your own question.

2
Axial inductor vs winding inductor
2
Ground pour underneath an MCU
5
Why put vias underneath an IC?
18
Why would metal from a pad be *underneath* the solder mask in a footprint specification?
5
Ground plane directly underneath physically large 100 µH inductor?
6
Altium Keep-Out Layer Locked
0
SIM7000e what are the two bottom keep out areas
9
Traces in connector's solder keep out area
2
Inductor made out of super conductors