Frequency behavior in the electric grid

Is the frequency behavior equal in very distant interconnected points of the grid? For example, if there is a sudden generation drop in Portugal, is the frequency behavior in Portugal exactly the same as the one in Poland? (Poland and Portugal are interconnected inside the CE power grid). If not, which are the differences in terms of amplitude and time?

The frequency trend is similar but not equal in two different distant points of the network after a perturbation. The trends are different in amplitude and time, and this is due to numerous variables (inertia, control actions, different damping, etc...). To summarize, it is different because the electric grid is a very complex system with several variables and regulatory actions involved. But at steady-state, the frequency will have the same value due to the fact that the electric grid is synchronized. In the picture, there is an example of 3 different frequency behavior after an imbalance of 1 GW in Spain: 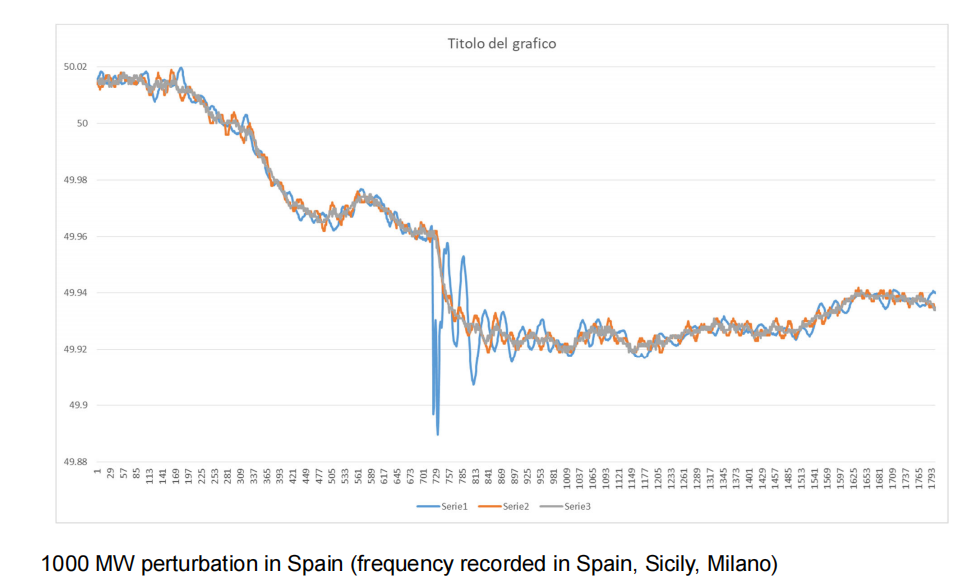 No, it's not. Speed of light wouldn't allow for things to be "exactly" the same.

Much more importantly, you need to think about how "frequency adjustment" looks like, even if it happens with two generators standing close to each other: either one is the first to become slower, which means there's a phase difference in currents, linearly growing with time, which means there builds a blind power component between, which grows (trigonometrically related to phase difference), and then that leads to a slow down of the other, which has inertia, so, which leads to the same process in the other direction, so, there's going to be some oscillations in the frequency.

I'd expect you see frequency "dips" to "swoosh" back and forth through the European grid until they're completely dampened away – it's a distributed control system like any other :)

4
Excess capacity in the power grid
1
What is the effect on power grid when utilization goes down some threshold?
17
What happens to excess electricity generated going in to a grid?
2
Effects of low voltage on power grids?
1
How to use the rate of change of frequency equation to calculate frequency drop in a grid based on lost generation
1
Rated nominal power of generation with respect to load condition
0
What happens on a DC-DC grid connection after a perturbation in the synchronous grid?