I'm studying basic components of electronic circuits, but I don't major in electronic engineering, so I have no idea why this following problem occurs.

In an inverting op-amp circuit, I learnt that the input voltage will be amplified by -R2/R1, but when I actually test it, it doesn't work at all.

So I learnt Qucs and simulated this circuit:

I found that the OP07 (op-amp) was working according to my expectations only at very low voltages (near 10 mV). 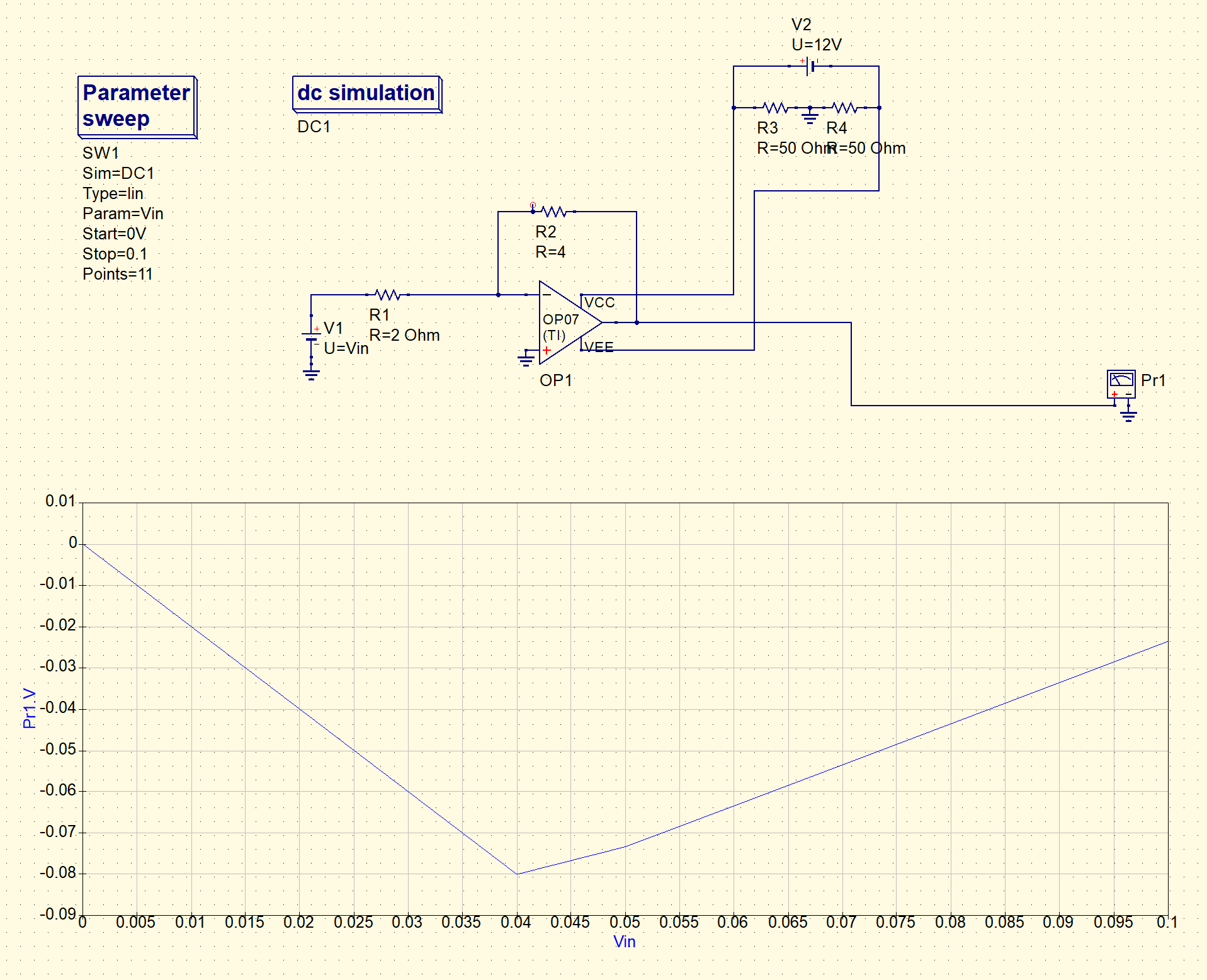 As a result of several tests I found it works near 0.04 V, but it doesn't work as I expected; in the area of more than 2 V it is amplified consequentially, but it is not the inverting circuit that I studied.

So I want to know, which part is wrong, and why it acts like this?

Your problem is the value of the resistors you have used. At these low values, a relatively high voltage out (like, even 0.1 volts) would require far more current than the op amp can provide.

The way to handle this is quite simple: multiply R1 and R2 by at least a factor of 1000, and get rid of R3 and R4. Rather than using a floating 12-volt power supply and a resistor network to produce supply voltages, use two 6 volt supplies, each tied directly to ground. A good rule of thumb for a general purpose op amp is to use feedback resistors (R2 in this case) of 10k or more, and load resistors of no less than 1k in total.

If you insist on using a single supply and a voltage divider to produce split supply voltages, you should be aware that a good rule of thumb for the resistor values is 1/10 the value of the smallest resistor which connects the output either to ground or to virtual ground. For your existing circuit, R2 connects to the virtual ground at the - input of the op amp, so R3 and R4 would want to be on the order of 0.4 ohms apiece. If you do the math, this means that each resistor would dissipate something like 90 watts, which is not something you probably want to do for real.

Try scaling your resistors to the k-ohm range. That’s more in line with what the op-amp can do.

Once you’ve done that, also know that op-amps have limits on input range, output swing and drive that vary from device to device (not to mention, finite open-loop gain.) The OP07 Spice model QUCS uses reflects that. Check the datasheet.

That said, if you want something a bit more interactive for general learning, try Falstad (http://www.falstad.com/circuit/). It’s not as accurate as QUCS or LTspice but it’s great for visualizing how circuits actually work.

The reason it fails in a device simulation in Qucs is the design cannot exceed the output current spec. Page 3 & 6 specs implies the reason.

"Open-Loop Output Resistance Ro = 60 Ω" thus loads that cause voltage divider attenuation and excess current means the design will fail. With negative feedback and high loop gain, this output impedance virtually reduces to some finite value towards 0 as the error is corrected.

Falstad's Simulator uses ideal caps, inductors and Op Amp, with Rs=0, so to make it realistic, you add Rs to the circuit or usually choose components in the 10k range and up so you can neglect Rs. (all components have some series resistance) Figure 31 shows a good example.