In electrochemical impedance spectroscopy, "equivalent circuits" are often used to model the response of an electrochemical system to an AC potential input in the frequency domain. I'd like to try and simulate the time-domain response for an arbitrary circuit, and it seems like the SPICE transient analysis tool will provide me with the necessary equations (although I can't use the simulator itself because of impedance components like the constant phase element)

The problem is converting this into a netlist that can be parsed by SPICE. In particular, how do you decide where the current nodes are defined? This provides some examples but it's unclear what the node placement rules are, where the 0th node is meant to go
https://www.allaboutcircuits.com/textbook/reference/chpt-7/example-circuits-and-netlists/

Since you have not provided any other clues, I'll try to answer with a methodology of implementation, rather than a precise answer.

I have a feeling that the numerical inverse laplace transform will fail with a CPE, (I think because it is a fractional operator in the laplace domain)

No, LTspice will handle sqrt(s), or exp(s), no problems. But, as I said, .AC will give precise results, while .TRAN has problems. That's because all SPICE engines perform something similar: they take the expression in s, perform an IFFT by guessing an appropriate frequency range and resolution. LTspice has some helper parameters for that: window, nfft, mtol, which are guessed by the engine if not specifically set. One thing that will help in .TRAN, sometimes drastically, is stated in the help (LTspice > Circuit Elements > E. ...):

The response must drop at high frequencies or an error is reported.

If the frequency of interest is (say) \$\omega_p=1\;\text{Hz}\$ then adding an s/1k+1 in the denominator will attenuate at high frequencies, while keeping \$\omega_p\$ relatively clean. With these, the first step is to try to deduce the appropriate responses that the elements will have.

Where their \$C_{\alpha}\$ signifies the capacitance value for the particular \$\alpha\$. Given the similarity between this notation and your picture, I'll conclude that \$C1\$ means \$C_1\$. This means that it will behave as a fractional capacitance, which will have a slope and a constant phase dictated by \$\alpha\$.

Then, the W element, whose expression seems more clearly given as:

With these, LTspice can be used to see their frequency responses:

For .TRAN, LTspice tries to guess some appropriate values but, in this case, manual intervention is needed, so I chose a simulation time of 0.5 sec and window=4 nfft=2048, for a step response (pwl 0 0 1u 1): 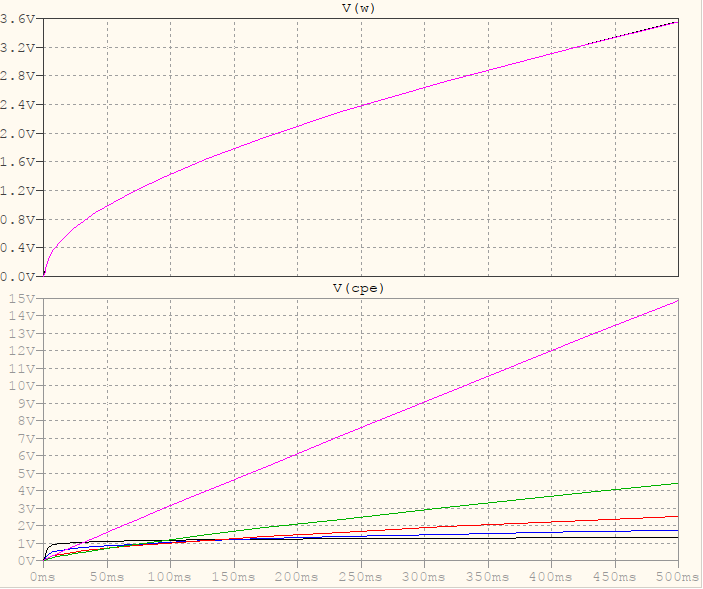 I have no idea whether these will fit your requirements but, if you want to use these in .TRAN, then you'll have to settle with either these Laplace equations, or try to create some lumped, passive or active filter that tries to mimic the responses. They will look something like this (example):

and the values will be such that the poles/zeroes will be an octave, or half an octave, or a third, etc, apart, so that the combined effect will give the required attenuation slope and the phase, over a finite bandwidth. It's not that bad, it can be done, it has been done and, to try to lessen the impact, here's how a rather dense 3 dB/oct filter made in the exact same way as above responds to the same step input, versus CPE and W:

The RC response is similar to a lowpass: it has a pole which has been set to 0.1 Hz, and its slope is -3 dB/oct, or -10 dB/dec. That corresponds to W, out of the box, and to CPE with a=0.5. Amplifications differ, though, so that's why you see *3.5 or *5 in the plot window. Otherwise, the transiet response comes quite close. Due to everything that's been said about the behaviour of Laplace expressions in .TRAN, I'm more inclined to believe that the RC approximation comes closer to the real response. In fact, because I know how dense the cells are and that the phase has a ripple of 0.115o, I'd say the response of the RC filter is very, very close. The downside is that, to build the CPE, the whole chain of RC elements needs to have parameterized values in order to make for easier changes in the response as a function of a, and these values need to be carefully crafted.

2
Equations governing the impedance of a generalised constant-phase element in the time domain?

2
Drawing Out Circuits from SPICE Description
3
How can one label a node with more than one name in SPICE/ LTspice
2
spice representation for mechanical problems
0
How does Spice parse a netlist?
2
Equations governing the impedance of a generalised constant-phase element in the time domain?
6
Equivalent circuit of a non-ideal resistor
0
Netlist for symmetrical component
0
What voltage or node are the BJT substrates connected to in a bipolar process opamp IC?