Intro how it happened:

I had cleaned my laptop from dust and reapplied the thermal paste. After this i have reassembled the device than it did not turned on. Then i took it apart connected the fan and it worked even POWER led was lit. Skipping the part when i constantly reassembled the laptop then find out it's not working so i started to remove the cables from the motherboard ( keyboard, fingerprint scanner etc ... )

Now i am at the situation where it wont turn on at all. I can hear a clicking sound every 2-3 seconds. Here is where i would like to ask for your help.

MOBO powered from DCIN, it's connector. Series current, 100mV/A, 568mV corresponds to around 5.7A

From bird-eye view the current form looks like the following: 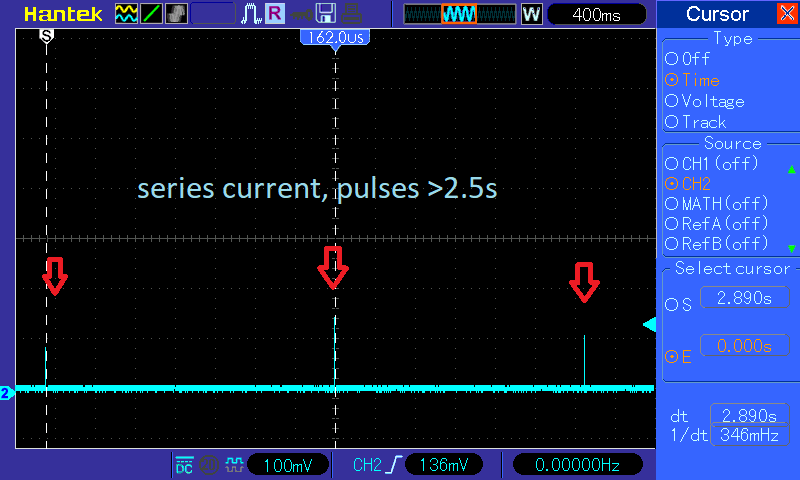 Here is the input stage:

Here is where VIN goes,high side swtiching mosfets: 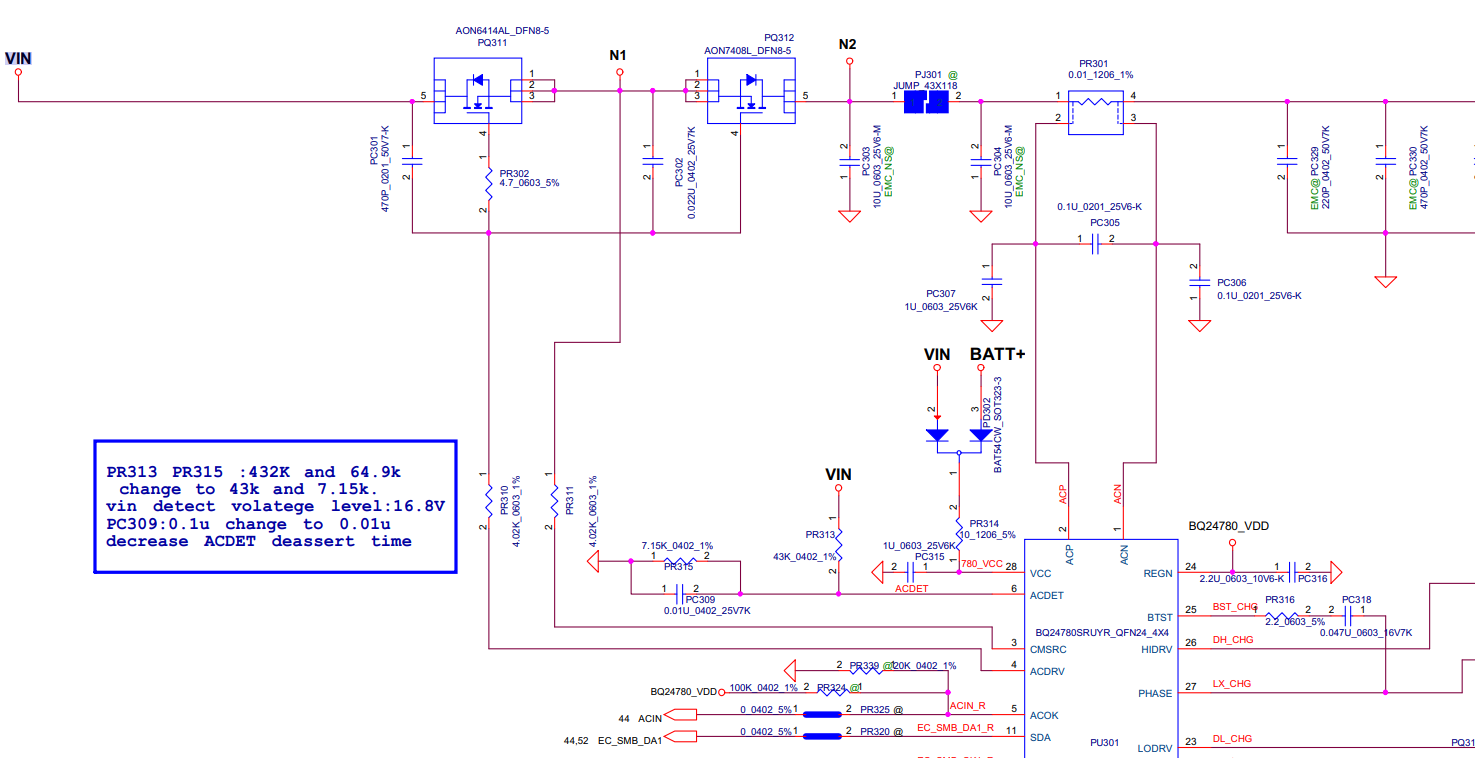 Voltage injection: I started injecting 5V after the switching mosfets(PQ311,PQ312) with current limit to see if i found the short. There was no high current so

Voltage injected on either N1 or N2 produces the following current waveform: 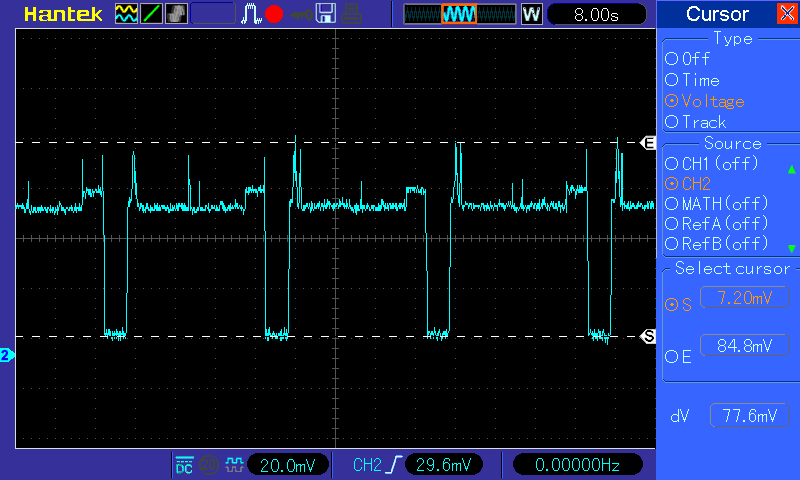 -Injected 18.5V on VIN then MOBO is not working but shorting PQ311(source and drain together) "does the trick" and MOBO works.

I have replaced PQ311 as came to the conclusion i had no better idea at that point. Changing PQ311 has not solved the problem, i was feeling it won't but anyway proceeded with chaning. I tested components connected to VIN if they are shorted or something but not found any suspicious.

I put additional measurements i made on the circuitry that might help you:

Voltage injected on DCIN while measuring voltage on ACDET point during inrush current. (LED is not working) 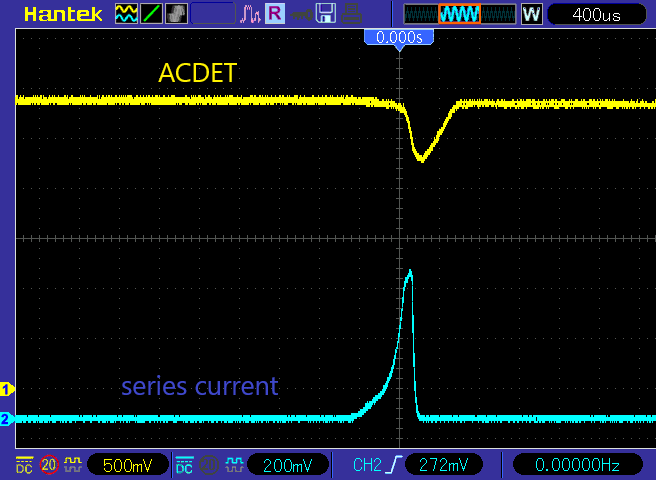 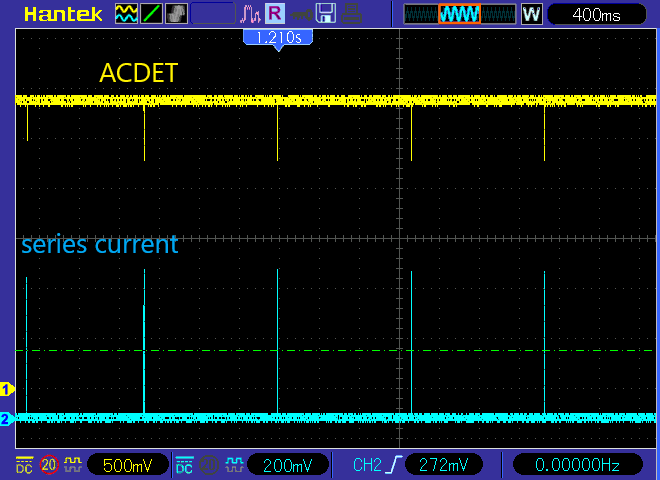 Voltage injected on DCIN while measuring voltage on ACDRV point during inrush current. (LED is not working) 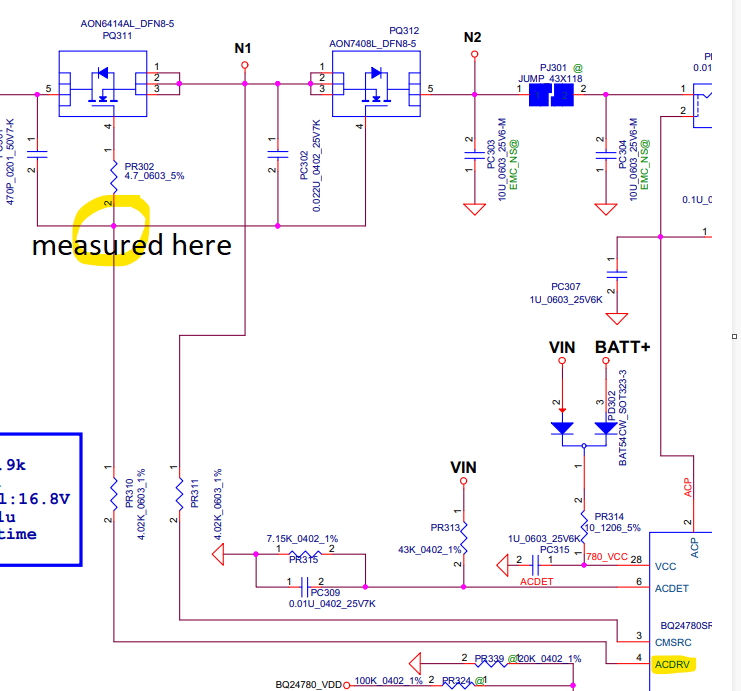 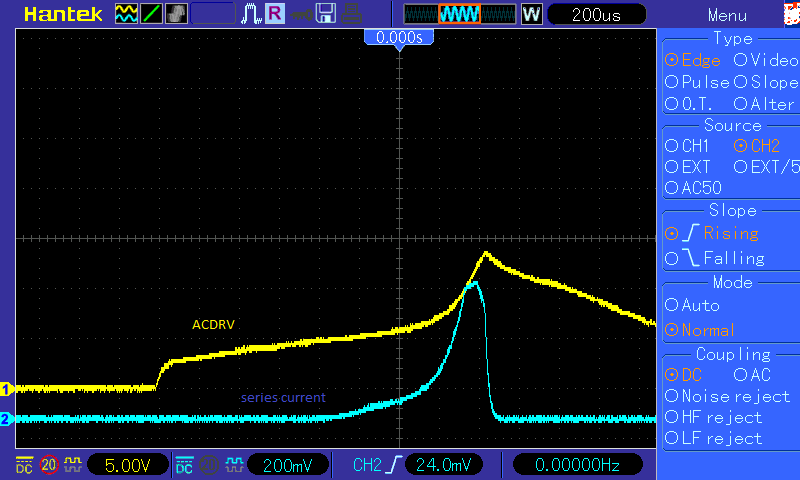 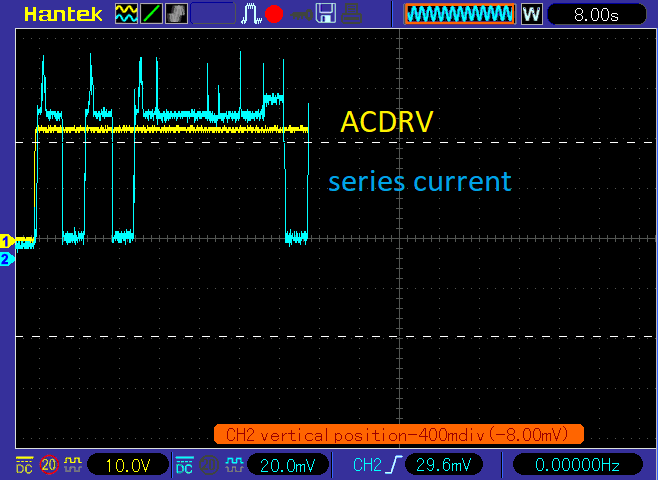 During this i measured 25.4V on ACDRV with a DMM

At this point i would like to ask you for your thoughts and help.

2022-03-15:I was checking the capacitors and power rails if there is a short to ground. I was doing as Ilya suggested, not looking at the schematic. I find only low impedances on the rails which connect to the CPU or GPU, around 10-15 Ohms. Also checked every voltage on the following schematic and they were all present 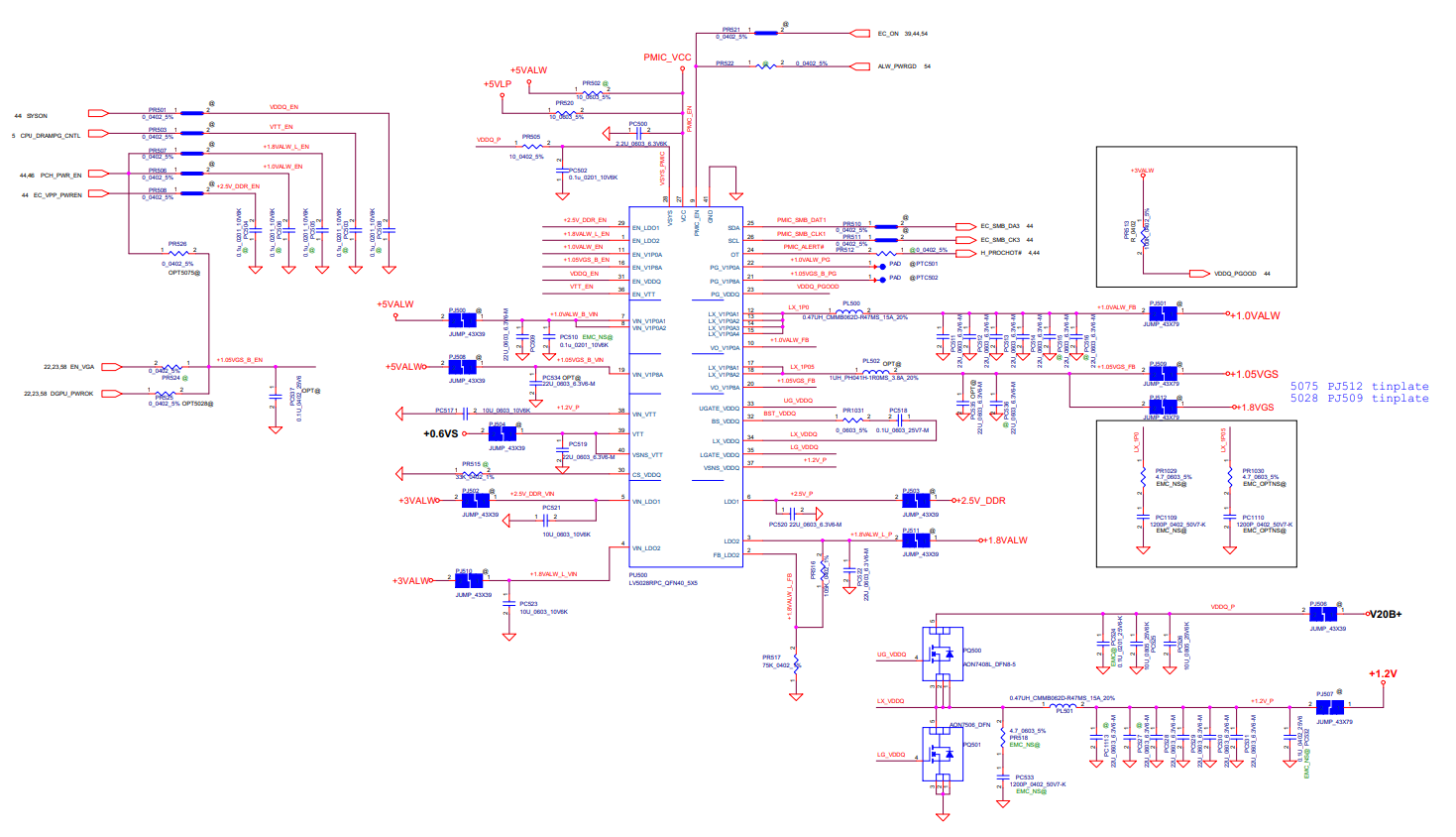 While doing this the board came alive.

So thinking a bit and left with no other option i begin to clean the board once again. Clean the applied heat paste as well ,from CPU and GPU. I looked it up before and this thermal paste is a non-conductive type so in theory it can't cause short right(thermal paste link)?! Also saw some really small amount at two points on the pcb where there was solder mask underneath it. I cleaned these as well(the thermal paste got transfered to these points during the analysis measurements). I am giving this cleaning a 50-50 chance as now i have no better option. I will assemble together the PC when i will have time, altough i have connected the FAN and it worked. I switched on and off of the supply to see if it will power up. Done it more than 15 times and it have not had any problem.

2022-05-10:Cleaning did not solve the issue. Altough i have some new information.

Now i have found some interesting stuff. If i put a wire like so:

device starts up, LED lights up. Then while the device is still powered and working I remove the wire and the device kept on going. To me this means there is some transient during startup which causes the problem and triggers some protection.

Repair tech here! Solid analysis. I advise against injecting 18V, because your main power bus of the board is probably 12V or so, and there is a chance that the switching MOSFET that converts it to 12V is burnt through, so your main power bus voltage becomes 18V instead of 12V. This correlates with the laptop turning on, because all the other voltage converters can often survive short-term overvoltage, I've seen it myself.

You never mentioned the model of your laptop and what kind of power draw one could expect (at least how many watts your charger is, it gives some estimate on what to expect - bear in mind it's battery charging + board draw).

PQ311/312 are not switching mosfets, they are charger isolation mosfets (and there is no inductor, a dead giveaway). Notice they're back to back, blocking current in both directions. If there is lack of info, it's actually an acceptable (but not perfect) solution to just bypass them with thick enough wire. But don't do that just yet, because of possible burn-through of 18V to 12V. If that's the case, it's not an acceptable solution.

Power cycling usually means there is most likely a short on one of the secondary power lines (or current sensing circuit, but that comes only with water damage), at least it appears at some point when lines turn on, so the whole thing resets. Look for coils/inductors on the board and beep them to the ground. Without looking at the schematic. Just look around the board and probe stuff. CPU/GPU power lines have little impedance, so they will always beep (they're beefy and are right near CPU/GPU), but you can measure voltage on them. If anything other than CPU/GPU power beeps, it's worth measuring voltage there.

For now, follow the power line after the isolation MOSFETs, find the main power buck converter and check if it's doing OK, including its switching MOSFETs (beep drain to source and back). Check the voltage on the main power line when you try to turn it on, as well as on 5V and 3.3V supplies, which you should be able to find in schematic.

EDIT as to where this supposed short disappears when you bypass the isolation - some voltage converters may not receive signal to start switching when you bypass isolation, this is highly individual for every laptop. If there is a burn-through of the high side switching mosfet, the lower side mosfet simply never turns on and the upper one passes full voltage through permanently, so the thing turns on as if there is no short. The short happens when under normal operation without bypass, the converter starts switching and the lower side switching mosfet turns on, while the upper one is burnt through and conducts as well.

This is of course only educated guess and my would-be first steps.

Not the answer you're looking for? Browse other questions tagged short-circuit debugging error motherboard or ask your own question.

3
current limiter / short circuit indicator for a variable power supply
3
DC-DC boost converter not working as it should
1
Discharging capacitors on a computer motherboard for safety
0
Testing short in circuit
1
PCB plated through hole short-circuit
1
Testing 8 pin P-Channel MOSFETS on Laptop Motherboard
1
Assembled PCB not working. Any ideas? (round 2)