Why do these LEDs have different brightnesses

I did a search for 0603 sized high brightness Kingbright LEDs on element14, results are here . 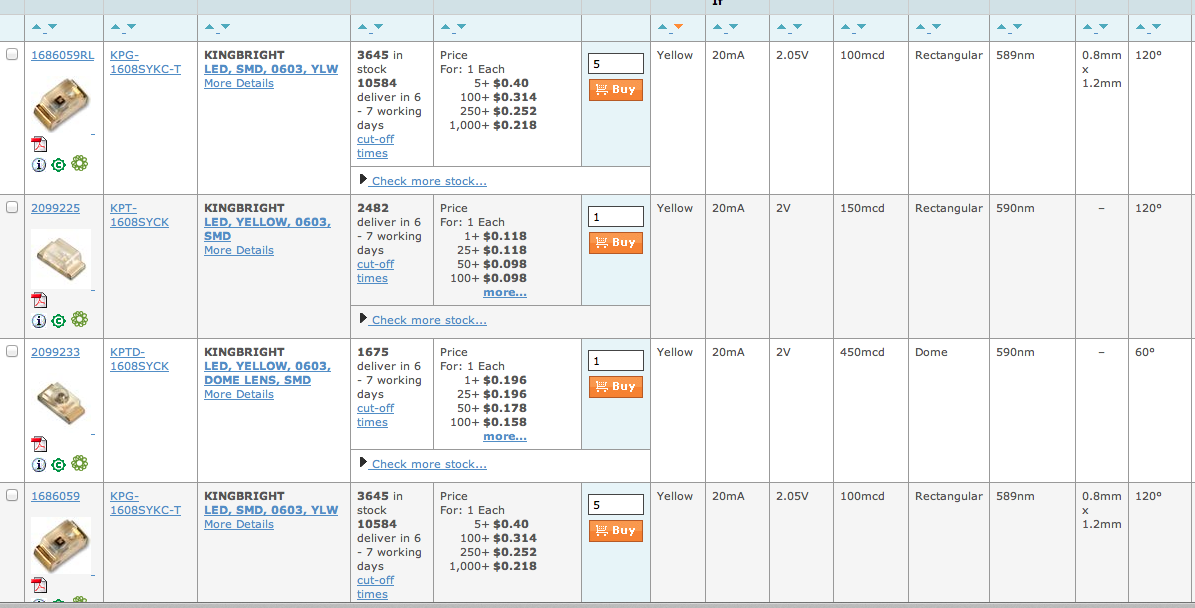 Why is there such a range of luminous intensity, even within the same colour, despite forward voltage, forward current, size and viewing angle being the same?

I am using the LEDs as indicators in a very low power battery powered device. The LEDs will be pulsed at times to give user feedback. Would the LED that gives the brightest output be the one that gives the highest luminous intensity, or is there another consideration?

This is going to be really long, so just skip to the summary sentence at the end to avoid TL;DR.

There are several factors contributing to varying millicandela ratings of LEDs, and more importantly the relevance of the mcd rating to the intended purpose:

What makes this more amusing is that some of the most reputable manufacturers are also resellers, i.e. they source their non-premium product lines from the same factories as bulk sellers, so the only difference is the branding on the box or reel, and of course the 100% to 300% brand-value mark-up. How many of these resellers actually bother to re-validate the measurements and parameters, is anyone's guess.

Don't trust the millicandela ratings on any LED, test them yourself if you absolutely need real data.

LEDs vary, a lot. This is one component you really need to look around for if you need to specify a particular model.

Keep in mind that datasheets from companies you never heard of before could be "rather optimistic". The ones you show are all from the same manufacturer, so should relate to each other reasonably well. Manufacturing processes change all the time, and there can be a lot of stock of older products out there. It is not unusual at all for what appears to be a better LED all around to cost half of what another one listed by the same distributer from the same manufacturer costs.

Also, candella isn't the whole story. Depending on your application, the angle may matter. You can't characterize the light output of a LED with a single brightness number.

4
Choosing an LED
12
Why do some RGB LEDs have six legs?
14
Why do LEDs have a maximum current?
3
Human perceived (relative) brightness of indicator LEDs
1
Drive multiple LEDs ON together using PIC Microcontroller
2
Circuit with 10 LEDs with 9V battery
2
Designing brake light with specific luminous intensity
2
Controlling the current through multiple LEDs linearily and efficiently
4
Choosing LED brightness
24
Why don't LEDs have built-in resistors?