How to find Thevenin resistance of circuit with voltage source and three resistors?

Replace the circuit with a Thevenin Equivalent Circuit and find the Thevenin Resistance (Rt) in ohms.

Unfortunately, with this circuit, I'm getting very confused on how you would exactly go about combining these resistors. Are they in series or parallel? Or are two of them in series with the other one? That's where I get confused. 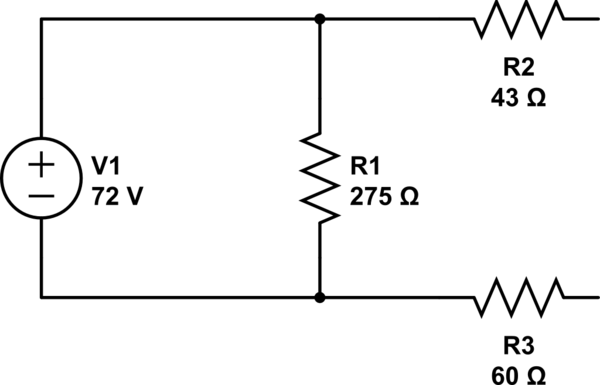 Thevenin voltage is the voltage across the two points you interested in (Vin). In this case it is easy to calculate as there is no current flowing in the 43 and 60 \$\Omega\$ resistors thus no voltage drop. Thus the voltage at Vin is the same as the voltage form the source, 72 V.

Thevenin resistance is calculated by 'turning off' all independent current and independent voltage sources and calculating the resistance between the two points. Turning off a voltage source sets the voltage across it to 0, which results in a short (0 \$\Omega\$) in parallel with the 275 \$\Omega\$ resistor. Any resistor combined in parallel with a short results in a short, leaving you with the 43 and 60 \$\Omega\$ resistors now in series, giving a Thevenin resistance of 103 ohms.

Putting the two together gives you a voltage source of 72 V in series with a 103 \$\Omega\$ resistor for you Thevenin equivalent circuit.

Not the answer you're looking for? Browse other questions tagged resistors thevenin circuit-analysis or ask your own question.