EDITED June 9th 2013 to give more detail (hopefully) I've recently set-up a data transmission system on a rotating machine. The data was collected and serialized from several ADCs connected to strain gauges mounted on turbine blades of the machine.

The power to the rotor-mounted system was coupled magnetically at 600kHz. We managed to get a few watts across the "gap".

Sending data back off the rotor electronics was tricky because we couldn't use "in-line" or end-of-shaft" optical coupling, rather, we transmitted the data across a badly coupled transformer. Hopefully this diagram will explain: - 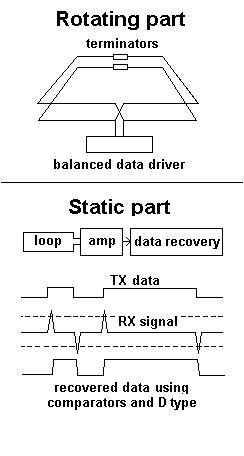 The top of the diagram shows two square loops that carried the data. I've shown the loops as square for reasons of making it easier for me to draw - they were circular around a shaft on the machine.

The bottom of the diagram shows the static receiver part. A small loop ran parallel to the rotating loops and received a small and differentiated signal representing the data. The system works fine but I'm also aware it's on the edge of working and leaves me a little uncomfortable about its long-term performance.

What makes the data system so flimsy is the magnetics that transfer power. This is a resonant coil system operating at 600kHz and a few inches away from the data coils. The data is scrambled and encoded so that if no data were present there would be a high low transition every 75ns (13.3MHz). Top data rate is 80Mbpsec. Because of the power magnetics, the data signal received is riding up and down on a sinewave of 600kHz so special filters were developed to remove this but it reshapes the data somewhat making it harder to detect.

I'm looking for advice on how to make the data transmission more solid.

Additions - there is little possibility of data packaging with CRCs and block retries - the electronics on the rotor is very basic/simple and doesn't have facilities for a receiver.

I've also developed a system that does use frequency modulation to carry the data - this uses a single loop for power and data transmission because there was absolutely no space for anything else. Because it is modulated the lowest frequency is about 78MHz and this gives decent spectral clearance between received signal and the 600kHz power pick-up.

This is a half aswer (putting it as a community wiki so others can improve it).

About the transmission itself @Kuba Ober pointed a good alternative by using light instead magnetic waves mostly becouse all the interference you have on the system.

If magnetic transmission is required you could use correcting errors algorithms like hamming or reed-solomon.

I seems to me that throwing more circuitry at the receive end has smaller returns. Can you in any way increase the coupling just to provide a more efficient system in terms of information transfer?

One problem is that we don't really know who the system is configured. In the suggestion below I'm going to assume the following:

1) you've wrapped the transmitting moving coils around the main shaft ( I assume this because you might be worried about balance). These are mounted to and rotate with the shaft.

2) you've also wrapped the receiving and power transmitting coils around the shaft in parallel with the moving coils, but they are stationary and gapped up away from the shaft.

Presumably the shaft is metal so it will probably have some sort of magnetic aspects to it. - how big is the shaft, how long is it? - do you have access to the end of the shaft?

I'm thinking that possibly that the magnetic field might exit the end of the shaft. SO if you put a ferrite rod antennae at the end of the shaft in a coaxial termination that it might be possible to capture these very weak stray fields. Rather than have a secondary pick coil around the shaft (which are still shown in the picture). 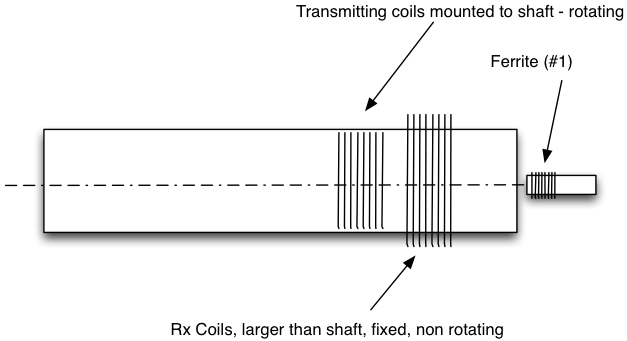 or if you gap open the TX coils that are rotating, on a circular spacer, the \$\mu_r\$ of the shaft will pull the field in close to the shaft and the reluctance of the air gap around the central core will allow some field leakage that the ferrite Rx will pull in. You'd need to modulate this though with your FSK system and tune it for the frequencies of interest. 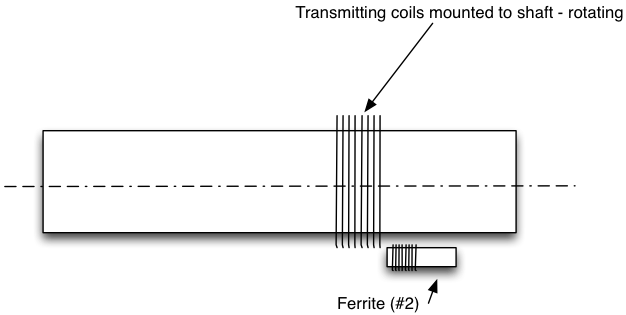 It would help to see a screen shot of the waveform with some notations. Does "badly coupled" mean there is no signal at times or just the signal is there but weak or noisy? What does an FFT show? Perhaps your noise is synchronous or periodic and can be removed from the data.

I would suggest you characterize the system a little to understand the coupling. Send a long well balanced preamble and look at your bit error rates. If the bit error rates are reasonable, then you have a chance. Next test various symbol rate errors. Perhaps the coupling is narrow band so larger symbols are getting distorted. How do these symbols compare to what your "random" symbols are?

Finally try adding a recovery system other than just comparators. Try a clock recovery and an integrate and dump system which would give you more dynamic range and remove any synchronous noise.

I'm not sure what you mean by "data transmission system had to "fight" against the power transfer magnetics". Are they acting as noise sources? It sounds like you'd be better off moving to an RF solution for sending your data.

EDIT: Now that I see your received data, I see that the channel is differentiating the input. So you are operating on the outside band of the bandpass of the system. I still think you should do a bit error rate on 101010... type pattern to see how what kind of raw performance you can expect. If it is poor then there is nothing you can do except more TX power or try modulating your data to another frequency where the transmission loss is less. (or the signal is easier to separate from the power noise).

If the bit error rate (BER) is acceptable, you can try differentially encoding your binary data, then check your symbol error rates to make sure your data isn't introducing errors due to DC drift.

An I&D + clock recovery might give you another 3db of performance improvement.

Not the answer you're looking for? Browse other questions tagged digital-logic data high-speed or ask your own question.