With minimal electronics knowledge, I'm trying to make a circuit using 2 bicolor LED (red 2.0V, green 3.0v, common anode), a 3v battery (CR 1220 lithium), a couple of reed switches and a toggle switch to power the circuit off and on. It involves a 180 degree swinging door with reed switch magnets mounted on it.

When the door is opened to either side, the bicolor LED on that side is green and the LED on the other side is red and visa versa.

When the magnets are not near either reed switch, both red leds are lit. I can't get the green led to light. I figured the 3v battery couldn't handle the draw for the red and green LEDs to be lit at the same time because the green LED is rated at 3v and the red is rated at 2v. So I put another 3v battery in series with the first battery. Still wouldn't light the green LED. I then added a 430 ohm resistor included with the LEDs, to the + pole of the battery. Didn't help.

I know I could split the circuit in two, with a 3v battery for each side and use a DPST switch to toggle power for both circuits, but was just wondering if there was a simple solution to keep it as one circuit. Sorry about the non-technical drawing, hope it conveys the basic idea. 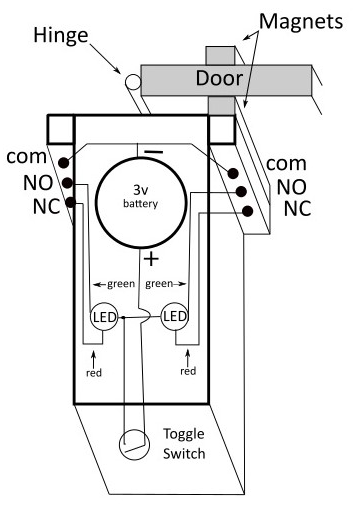 A 2V diode in parallel with a 3V diode will cause the node to pull down so much that the 3V diode will not get enough voltage or current. Especially with a coin cell that has a high internal resistace (which is likely why you didn't blow the red led out).

By adding a resistor to each diode cathode, you force an equilibrium where both diodes + resistor see the full voltage.

The red diodes will get a bigger resistor due to the voltage difference.

That said using a 3V coin cell will depending on the current pulled not last long at all.

You need to add a resistor for each LED. In case if you have a coin cell which is a very weak battery, you might not damage the LED, but generally directly connecting a LED to a voltage source like a battery is just plain wrong.

If you parallel 2V and 3V LED by directly connecting them to a 3V coin cell battery, the 2V LED will hog all the current and bring the battery voltage down to 2V, so there is not enough voltage for the 3V LED to light up.

1
2 color LED short circuit my board
3
How do I design a circuit for a bi-color led to display power?
2
2 LED Parallel circuit help?
0
Need a circuit that lights a LED but shuts down LED after a while
0
Battery indicator connected with bicolor led
0
Toggle bi-colour LED
0
Bicolor/RGB 2x2 LED Matrix?
0
Simplest circuit to toggle through 3 colours on RGB LED
2
How do bicolor LEDs switch colors?