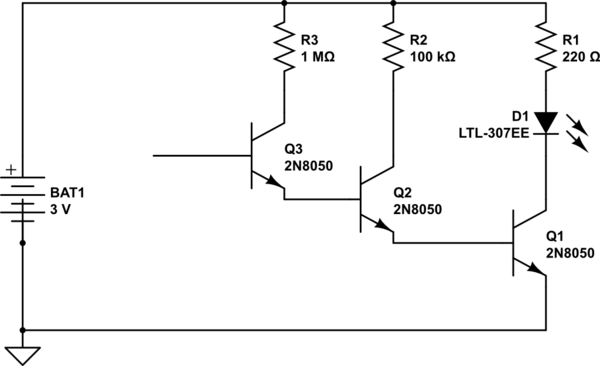 I built this circuit. Different versions of this exist on the internet, some using an MPF-102 JFET instead of the 3 NPNs. The various sites describe it in several different ways:

The one I built behaves very strangely.

The LED lights if I hold the the circuit board and move the probe near a solid object. If I put the board on a table, it doesn't light as much, but it seems that any object with static electricity will light the LED if I rapidly move the object towards, away from, or back and forth near the probe.

A cotton towel does not light the LED and neither does any metal object, but my acrylic sweater does, and my hand will light it each time I scuff my feet on the nylon carpet.

Despite what some of the web sites note, the LED does not light if I bring a plugged-in electric cord near the probe when the board is on a table.

Does anybody know what this actually "detects" and why it behaves as I've described?

Does anybody know what this actually "detects" and why it behaves as I've described?

You are basically detecting current on the base of the first 2N8050 (Q3), the rest of the transistors are to gain this current, if the current is high enough the LED will light. For objects that create 'static electricity' or static electric fields, The current comes through the air (air is considered an insulator, but can conduct really small currents through it usually less than nA but hard to say because conductivity air behaves differently because of humidity and the chemical makeup of it and that can vary from location to location). Lets say some object has 5000V of charge (which isn't hard to do) and humid air is around 100GΩ. there would be about 50nA of current flowing into a metal pin (like the pin of a 2N8050 transistor).

Many materials (especially plastics and paper and especially after rubbing against another material) can carry surface charges of thousands of volts. Clothing can also do this with varying results. The human body in combination with movement with clothing or the floor can also generate kV's of charge, even several kV from head to toe.

The pin can also function like an antenna and pick up RF (or if you have any other wires attached to the pin), these small currents are also gained up and lights the LED.

The problem is it would be hard to distinguish which source the circuit is picking up, because so many sources could activate the LED.

Not the answer you're looking for? Browse other questions tagged darlington static-electricity or ask your own question.