I have this basic question.

Ethernet has 4 twisted pairs. Can someone tell me which are half duplex and full duplex and how to identify them?

In many articles, they are confusing. Some say Ethernet is half duplex. But in some articles 1000BASE-T is mentioned as full duplex.

Can someone tell me how to identify which is half and full duplex?

And in the below image of 1000BASE-T (which I understand is Full-duplex_, can someone tell how is the 125M calculated value arrived for each pair? 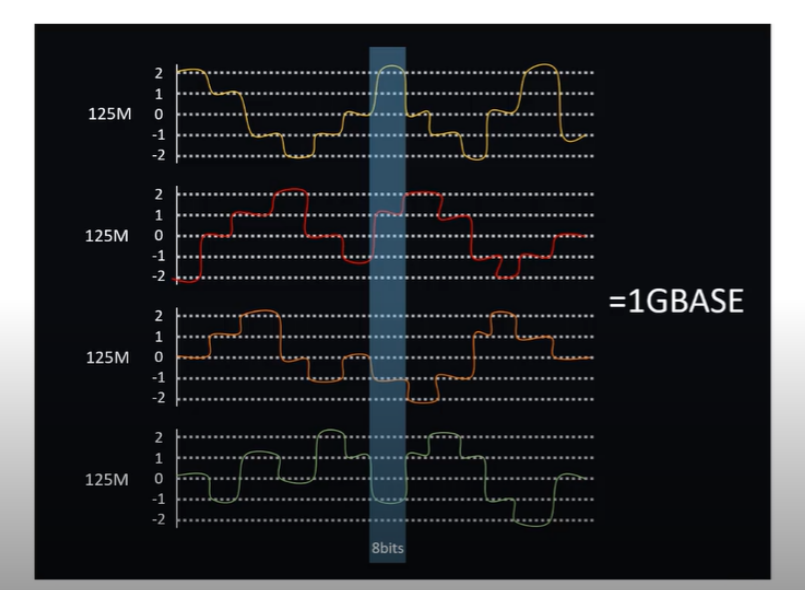 1000Base-T and 1000Base-TX are both full duplex only. T uses all four pairs bidirectionally, while TX uses two pairs to transmit and two pairs to receive.

There are also many other variants in both 100Base-T and 1000Base-T family of copper interfaces.

As to the question how to figure out how to identify these differences, for example Wikipedia articles have quite detailed information with explanations how different Ethernet standards work.

The legacy of 10Mbit twisted-pair Ethernet is just two pairs, at RJ45 pins 1+2 and 3+6. These already allow for full duplex operation, provided that the active elements support it. This wiring has been inherited by 100Base-TX.

Half-duplex operation is inherent to coax media (10Base-2), where full duplex is not possible at all.

Twisted pair Ethernet (10/100 Mbps), by virtue of having one pair in each direction, is inherently capable of full duplex. But, the old active element, called a hub (a dumb electrical repeater/amplifier) turns the network into a multi-exit half-duplex medium - not capable of full duplex. To make use of full duplex on twisted pair media, you need the network to contain a "non-blocking data stream cross-connect element" in the active element role = you need a bridge/switch. I'd almost say packet-level "store and forward", except that the other mode is "cut-through switching", which is also compatible with L1 full duplex operation. A special case is a point-to-point twisted pair connection (no hub/switch) that is also inherently full duplex capable.

Gigabit Ethernet over metallic wiring is running over all 4 pairs, using full duplex and echo cancelation on each pair. Just the initial auto-negotiation handshake still runs over the two pairs: 1+2 and 3+6. Thus, if you have a broken patch-cord, where only 1+2 and 3+6 are functional, and you use it to connect two gigabit PHY ports, the link handshakes at 1 Gbps, but then fails to function...

If auto-negotiation fails, the fallback mode is the lowest rate at half duplex, i.e. typically 10/half.

Not the answer you're looking for? Browse other questions tagged voltage ethernet signal-processing bandwidth phy or ask your own question.

13
How does "bidirectional" transmission on gigabit ethernet work?
9
Why didn't 1000BASE-TX gain more popularity than 1000BASE-T?
0
Poor bandwidth after re-coupling an Ethernet cable
0
Using SMI to check speed of ethernet phy
0
1000Base-KX PHY
1
How to debug 100BASE-FX, 100BASE-TX, 1000BASE links
1
What is the carrier frequency of Ethernet?
0
Clock recovery circuit in 100base-t / 1000base-t