Of course there is some luminous intensity above which the cell sensor will die, but I don't think Lightning will get there.

According to the National Oceanic and Atmospheric Administration (NOAA) the average lightning bolt contains enough energy to light a 100W incandescent bulb for 3 months.

Only a small fraction of that energy is converted to optical energy (light), just like the incandescent (~3%).

Assuming you are 1km from the lightning bolt (VERY CLOSE!), the emitted optical energy is spread over the surface of a sphere 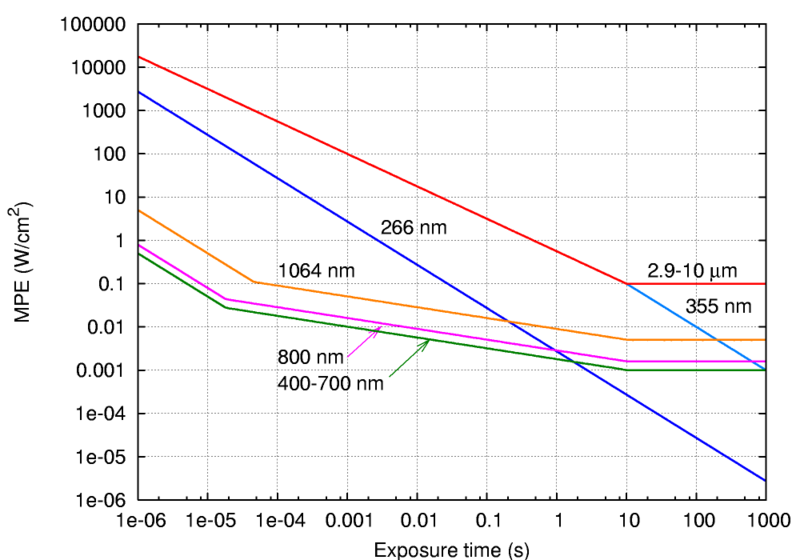 The amount of the original almost billion Joules of electrical energy that reaches an individual pixel in your imager is about 1/2.43e-19 times smaller!

Therefore you are below the human damage threshold by five orders of magnitude. Even if we assume the full electrical energy of the bolt was light you get:

Cell phone sensors can withstand greater intensity than the human eye without damage since they can handle internal temperatures in excess of 125C which the human eye can, obviously, not.

Cell phone sensors are also a lot less sensitive to light than the human retinal cells, furthering their withstanding ability.

You can recalculate for being even closer to the lightning bolt and for farther away by recomputing with the equations above.

Optics is tricky and in the analysis I made a few assumptions that could be expanded to clarify.

Nope. Physically impossible for non-collimated sources. You can prove this to yourself by observing the lightning bolt from different positions. If you can walk around the lightning bolt and still see it, it's an approximate isotropic radiator (emits light in all directions). Given that lightning is a highly chaotic process involving the production of plasma (high-energy random motion), this is expected.

The camera cannot collect the light (energy) emitted in directions that do not point towards the camera. Therefore, the intensity, just the energy available over the area in which it is captured, will decrease with (the square of) distance in a loss-less medium.

The energy impinging the area of the camera represents an ever smaller quantity of the total illumination sphere of the lightning bolt as you back away from it.

The effect of the lens (focusing)

I modelled the lightning bolt as a point source and disregarded the lens of the camera. The lens has an almost insignificant effect. Let's put the lens back in and assume it's perfect (no spherical or chromatic aberration, perfect installation, and loss-less).

First lets validate the point-source assumption. Typical lightning bolt strikes from about 6,000 feet (~1.8km) to the ground and is 1 inch (2.54 cm) in diameter.

Standing 1km away you would need a camera with at least a 61 deg field-of-view, a requirement which our example iPhone1 camera meets. The camera therefore catches all of the light from the bolt radiated in its direction.

To validate our point-source assumption, we need to show that the total light reaching the camera from a single on-bore source is equivalent to the total light of a set of weaker point-sources distributed along the path of the bolt. To clarify the math, I'll model the lightning bolt as a straight arcing (uniform radial distance to the camera) line and the lens in a 2D plane (but the extension to 3D -- e.g. 2D image plane -- is logically trivial).

That is to say that if we divide the lightning bolt into n-many points of light, distribute them along its length, and reduce their intensity by n (evenly distribute the output power among the points), the total intensity of the light on the lens is the same as if radiated by an on-bore point-source (assuming the lens can see the whole extent -- arc length -- of the lightning bolt).

The effect of the lens becomes:

The number of effected pixels is a function of the composition of the image (how much of the frame the lightening bolt covers), the size of the bolt (width and height), and the distance of the observer (how close are we?!).

Rather than roll-up all of these parameters, I took a sample set of lightning photographs (example) taken under approximately these conditions, threshold filtered them, and averaged the number of white pixels. Approximately 5% of the sensor pixels are covered by the lightning bolt.

For the iPhone1 camera with lens area approximately 0.1 cm^2, the capture ratio on an illuminated pixel is 7.48e-18 -- for a lens focusing gain of only about 31x. Given the magnitude of the margins, the focusing/lens just doesn't play an important-enough role.

On the origins of damage

That's a perfectly fine assumption (a lot like assuming there is gravity). Heat transfer is really all energy transfer is. You can read more about CMOS sensors and how damage occurs here.

and that a device that can withstand a higher temperature than an eye is necessarily more resilient,

Given that damage comes from heat transfer, withstanding greater heat transfer is by definition more resilient.

also that being less sensitive would make a device more resilient

This deserves some nuance, but not really that important given the other factors. Being less sensitive requires that you are less reactive to or less absorbing of the phenomenon of interest. In the general case, that implies less energy transfer, because the assumption is that the phenomenon is taken in isolation (ceteris paribus). In practice, there are alternate parallel mechanisms, so it may not hold.

No, the light from lightning will not damage the video sensor in your phone.

Not the answer you're looking for? Browse other questions tagged device or ask your own question.

2
What is this part: 2n2 630?
1
Why are handheld devices always backlighted nowadays?
4
Streaming camera solutions for RaspberryPi MCU