Can VSWR be complex-valued or is it always real?

This question is related to this one, but about VSWR instead of return loss:

Can VSWR be complex since it is based on a complex-valued \$\Gamma\$? If VSWR is complex then it is worth noting that:

Some references show magnitude bars around \$\Gamma\$, some do not.

If VSWR can be complex, then I would like to understand what \$\|VSWR\|\$ of a complex-valued VSWR means (and how might it be used), because it is quite different than VSWR when a magnitude-valued \$\|\Gamma\|\$ is used to calculate it.

VSWR can also be complex (Re+jIm, in theory) but most people just use it with "Real" values and is always >= 1.

The view of any reflected voltage wave alone so see the reactive part would need the reflected current to plot the ratio, so it is not used. VSWR can be generated by Network Analysers. e.g.

Essentially it's the load impedance ratio, ZL with Z0 to determine the VSWR. Conjugates are used to match , which means to null the reflected reactive voltage a "negative of the reactive impedance" is used for the load with the real part added to match. A negative capacitance is inductance and visa versa.

VSWR=Z0/ZL or VSWR=ZL/Z0 with the bigger Real number on top, so the ratio is always >1.

The scalar VSWR quantity is shown alone and below it RL [dB]. 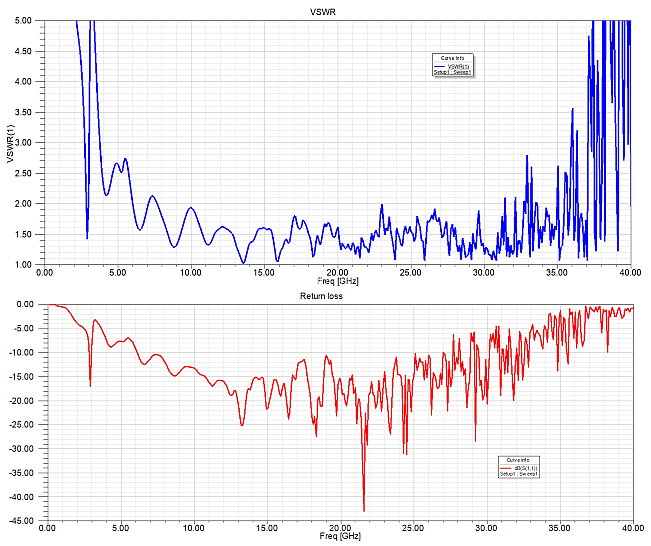 The best way to view complex impedances is by \$\Gamma\$, the complex Reflection coefficient as normalised values in the Smith Chart with a perfect match = 0 in the centre. 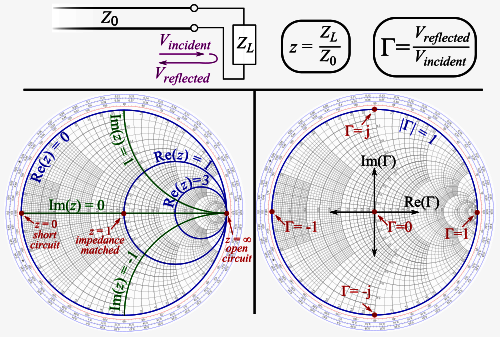 A colleague sent this answer via email so I'm posting it on his behalf. Note that his decimal points are commas:

SWR is not complex. Gamma is complex but |gamma| = Rho and SWR = (1+|gamma|)/(1-|gamma|) = (1+ Rho)/(1-Rho). Probably in some publications either technicals or internet there are some confusion what is gamma and Rho. Mathematically SWR may be calculated as a complex number but it has no sense because is a relationship not a figure. SWR is expressed as value:1 (value >= 1) and a complex value a+bi:1 is not understood (at least for me).

Because I "never" sussed gamma in complex format I have no such confusion problems because I use Rho and argument. Last years with computer aid then I work in impedances and let computer does the heavy job. Has been interesting to remember concepts. 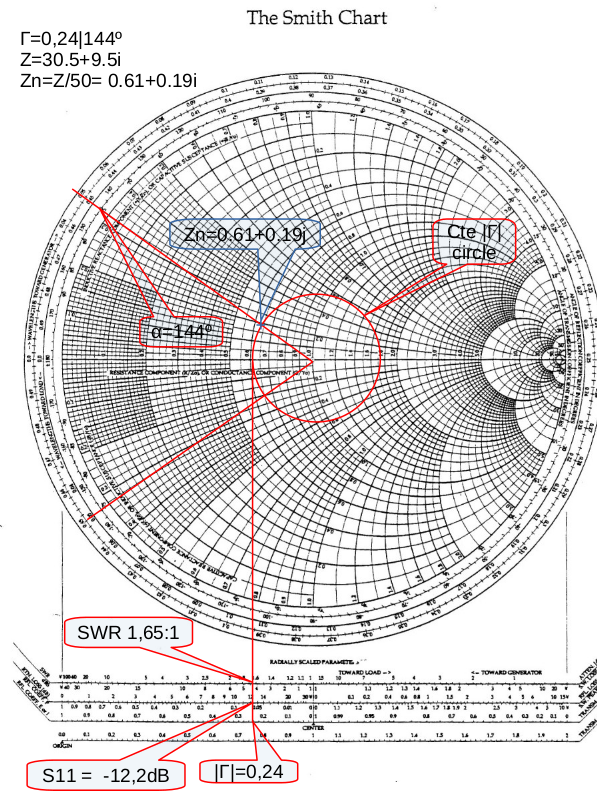 Inaccuracies are because drawing on rotated chart (scanned one is not very good). Nevertheless, it is quite approx. Nowadays computer operations 64 bit floats shadows the relevant information. Notice moon travel calculations started with slide rule!

For this example I fixed |gamma| 0,24 bottom side scales. Then a vertical line to real axis. Now a circle (compass draw) centered in smith chart and radius 0,24 (tangent to vertical line).

When we speaks it usually we say S11 and minus xxdB and we do not specify S11 module's in spite of speed up speeching. Thus, this becomes a confusion when we have to write S11 and we forget | | symbol if no phase is specified.

The graphical error is 2 ohms in real part and 0,25i in imaginary part. Not too bad. In spite of, either large real part or large imaginary part is very inaccurate representation in smith chart by the other hand very low values are drawn in extended scale resolution area. In real world extremely capacitive/inductive antennas may be matched mathematically but such values changes a lot with environment, so inaccuracies in such impedances are not very critical against smith chart resolution in right area close to infinite. Those representation problems are solved by computer SW, of course!.

Not the answer you're looking for? Browse other questions tagged rf impedance impedance-matching reflection reflection-coefficient or ask your own question.

1
RF Energy Harvesting Project
6
Transmission Line Impedance Matching Basics
6
Transmission lines and power transfer
3
Maximum VSWR that can be tolerated?
2
Maximum power transfer and minimization of signal reflection: When should what be applied
0
Can \$\Gamma\$ remain complex while calculating return loss?
0
What is the difference of meaning between the phase angle of S11 and the phase angle of Γ (Gamma)?