I need to measure the voltage difference between two high-voltage points (~500 Vdc). I'm thinking of using a differential amplifier with a gain of 1/100. While it behaves as I want it to in the simulation, I want to be sure about picking the correct op-amp for this task. 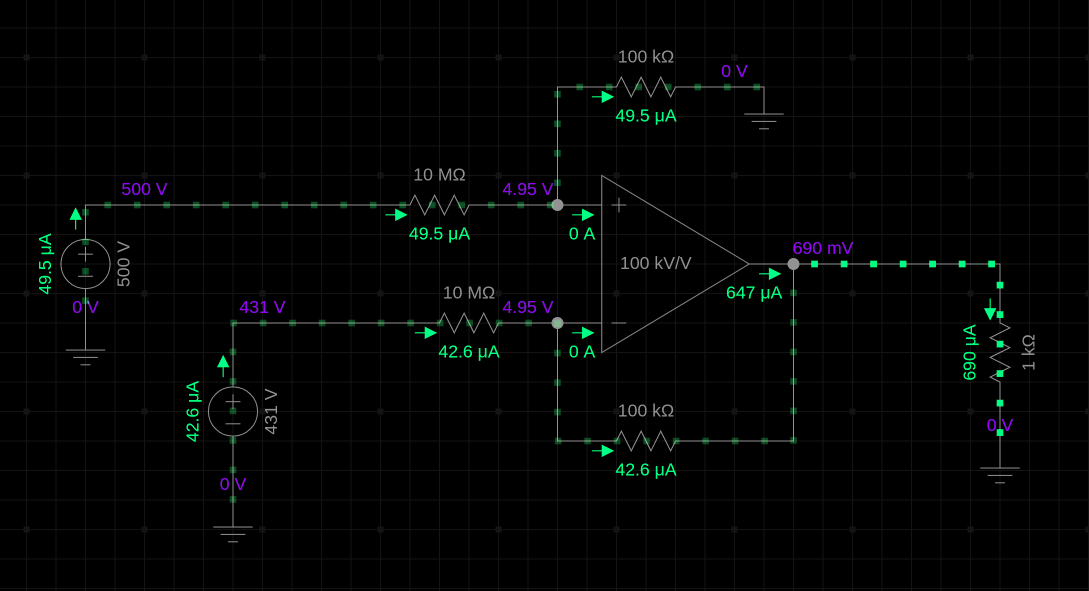 The maximum specified input voltage of a 741 op amp is only around 15 volts (depends on supply voltage). This is going to be true for ordinary op amps which were never intended to handle such high voltages. Your best bet is to use a voltage divider before the differential amplifier to bring the levels to less than the supply voltages.

A different approach would convert the voltages to currents, and perform subsequent operations on the currents. A high-level scheme of the approach would be:

This could be implemented using op-amp based current sources/mirrors.

Alternatively, a somewhat hilarious implementation of such a circuit, with DC CMRR mostly dependent on thermal tracking of R1 and R2, is shown below.

I1 can be a current reference or a current source driven with a resistor from 12V. The common mode extends to 0V, although full accuracy is only available above input voltages of about 20V.

The bandwidth of the circuit can be adjusted by scaling the currents. The current consumption from the 12V supply is maximum 0.9mA with the currents shown. The output voltage would be typically buffered, scaled and fed to an A/D converter.

With some care in trimming and transistor pair matching, the accuracy at room temperature should be better than 0.1%, but you absolutely should verify that for yourself. Some AC trimming may be necessary as well, depending on the desired bandwidth of operation and the common mode frequency content. A common mode rejection choke could be used to improve AC CMRR.

The trimmers should be initially set to the center point position, and then adjusted as needed. The 10kOhm bias resistors are not critical and can be 5%. Other resistors should be 0.5% or 1% and 50ppm/K tempco or better.

Note that this circuit does not claim to be the best in any way nor even practical for a product. A well implemented discrete in-amp would use potentially fewer transistors and have better AC performance anyway. It's meant to be funky and illustrate how discrete current sources can be harnessed for some degree of DC accuracy. 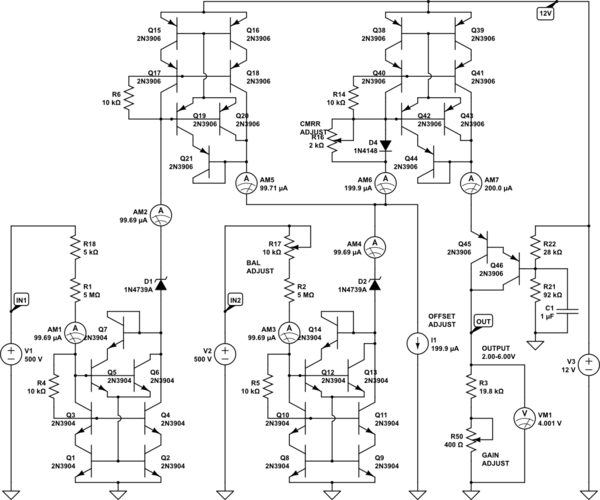 In a physical circuit, the performance may be potentially improved by connecting the collectors of Q21, Q44 to ground, and of Q7, Q14 to 12V, instead of connecting them to their respective bases as shown. This will be especially the case if the beta of the transistors is low (<50). With high beta transistors - the simulated ones have beta=100, the connection as shown seems to provide most accuracy.

Not the answer you're looking for? Browse other questions tagged operational-amplifier voltage-divider voltage-measurement or ask your own question.