For traditional laminated EI mains frequency power transformer cores, the core dimensions and core material determine, for a given primary voltage and frequency, a minimum number of primary turns required to prevent core saturation. There is of course some wiggle room in deciding what level of flux defines "saturation", but as a first approximation, the original claim is true.

Once the number of primary turns is determined, the VA capability of the transformer is limited by (among other things) the winding ampacity (current carrying capability). Therefore, classically, transformer designers would use as much copper as would fit through the core's window to minimize copper losses, and heating, and consequently maximize VA rating. Typically, half the window space would be filled with copper for the primary winding, and the other half would be for the secondary winding(s).

However, I have noticed that this design principal does not seem to be applied to toroidal mains frequency power transformers. That is, the core window tends to contain significant area that is not filled with copper. For example: 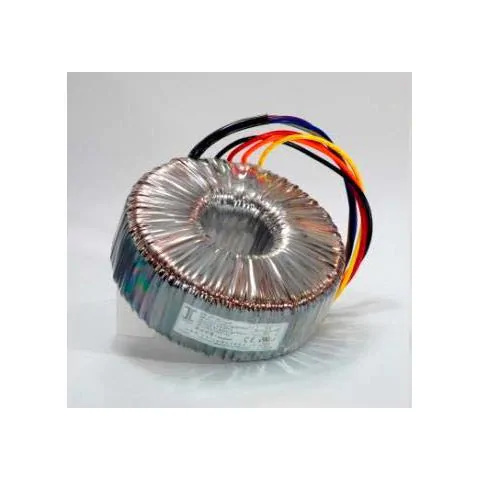 It seems to me that the mechanical problems are increasing the copper through the window of a toroidal transformer are not insurmountable.

My question is, given that a higher price may be charged for a transformer with a higher VA rating, other things being equal, why do manufacturers of mains frequency toroidal power transformers leave such a large area in the window of the core empty of copper? Is there some other limitation on the VA rating of a toroidal core transformer such that adding more copper would not increase the VA rating? Is there some other factor, such as flux leakage, that would sufficiently offset economic advantage of higher VA rating? Or is it simply that the technical challenge of adding more copper would offset the price advantage?

I presume it's got to do with manufacturing aswell. For rectangular cores you can assemble two wound rods and then stick them together almost without gap in the center between the windings.

Toroids are wound when they are already closed. The winding wheel machine has to travel through the hole and needs space for this.

It's when you hit the knee of diminishing returns.

The hole left looks big, but it's only a small fraction of the total winding window within the core.

If you put a few more turns on, they would be longer turns than those already on there which would

There's always a tradeoff with transformers between the cost of the iron core, and the copper windings. When copper is relatively more expensive, transformer design tends to shift to more iron and less copper.

There are only a limited number of stock sizes of toroidal core made, so if you want to design a transformer of a particular VA, you might be left with a choice between ordering a small run of a custom sized core (expensive unless you're buying very large numbers), or using a cheaper but over-sized stock core.

Ultimately it comes down to cost, but we'd need a peep at the manufacturer's costing spreadsheet to see how that design stacks up against one with different material ratios.

Not the answer you're looking for? Browse other questions tagged power transformer mains apparent-power toroidal or ask your own question.