Why do LEDs emit less light as they get hotter?

LEDs get less bright as they heat up. It's in every LED datasheet. Why does that happen? What is the mechanism here?

I know the bandgap decreases causing the wavelength shift. I also guess that they become less efficient at higher temperatures (that is just a guess, perhaps due to more energy in the system increasing the chances of carrier recombination). But I'm not sure if either of those are directly related to the decrease in brightness. 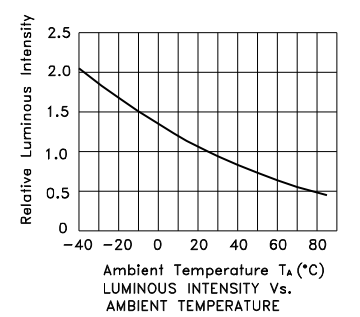 The photon flux on the other hand is strictly proportional to the electrical current in the diode - each electron has a certain chance to cause the emission of one photon. The "certain chance", commonly called quantum yield, decreases with higher temperatures, which is the effect you are describing. The major reasons for a decreasing quantum yield are

So, there are two things happening when the temperature increases, which both cause the emitted power to get smaller:

It is important to differentiate those two effects, that's one of the key points why we had to come up with quantum mechanics.

I recommend this article and this paper which cover the topic.

Why do LEDs emit less light as they get hotter?

They only do so when the current is constant. That's why I hate those graphs, because the constant current constraint is all-important here. Without it, the graph makes no sense and can't be interpreted at all.

You can regulate the current against the forward voltage drop to completely compensate this effect, although if the LED has not enough cooling and you don't limit maximum current adequately, it'll happily thermally run away. Typically the regulator will have a temperature cut-off (temp feedback via forward voltage), so this won't happen. But simple breadboard contraptions of this kind a excellent led killers. Don't try them without a series resistor in place to limit damage :)