Very confused about where "ground" is connected

I actually don't know that much about electronics, but I'm very interested in learning more.

I watch Ben Eater on YouTube, and whenever he needs to connect the part of a chip to ground, he connects it to the "ground rail" which is clearly the "negative" part of the power supply or the "cathode". You can see it in this video https://www.youtube.com/watch?v=LnzuMJLZRdU&t=85s . How does connecting the reference point to the power supply allow for an accurate reference point?

Yet in a breaker box, for example, the ground is clearly a metal rod inserted in the earth or concrete. It's not connected to the negative or cathode, wherever that may be or is. You can see it in this image: 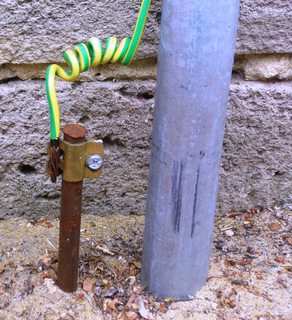 So what's going on in both situations? What is ground really?

In the picture the point is earth potential. Back in the days Earth was defined as 0V to make calculations easier. A voltage is always between two potentials (points).

When you use an isolated power supply (like Ben Eater) there is no connection between the DC outputs and Earth. A transformer physically separates the Earth from the output. So you can just define Ground to whatever you want at the secondary winding of the transformer.

Lets say the voltage is 5V in the video. Normally you would say the negative (black) rail is 0V. But because a voltage is always between two points the potential of one point is not defined as a voltage. The only important thing is that you have a potential difference (voltage) of 5V between black and red. To make it easy, you define the black common rail as 0V and the red one to +5V. But it is also possibly to say that the red rail is 0V and the black one is -5V. It is just a definition thing. But to make it more consistent you define ground as 0V.

This voltage of 5V just exists between the outputs of the transformer inside the power supply. So you created a "mini earth" only for this circuit.

So you can define a random point in a circuit as ground. That would be 0V and then you can measure or calculate all the other voltages in respect to your defined ground.

I'm sorry to tell you this, but "ground" has several possible meanings. You've run across the two most common, but which applies depends on the circuit being discussed.

For instance, in US AC power systems, power is provided as a central neutral line with two 120 VAC lines which reference it. The two AC lines are 180 degrees out of phase, so if you look across the two lines you get 220 VAC. (And yes, 2 x 120 is 240, not 220 - it's a historical artifact of how power used to be provided. As of about 70 or 80 years ago, standard wall socket voltage was 110 VAC.) The neutral is connected to physical ground (a metal stake driven into the actual ground at the power pole. Likewise, neutral is connected dirt ground at the input to the house, with a copper wire called ground distributed to every socket in the house. All of this is done to provide a (relatively) safe path for current to travel if one of the other wires is broken at the wrong place, or you do something silly like stick a fork into the toaster and touch the heating elements.

Electrical power, as distributed by the very first electrical companies, was about 90 volts DC, and used a single wire. The return current was conducted by the earth, or ground. From this usage came the idea that power is provided by a "hot" line, and the return is by ground.

This usage persists in general circuit design. Every power supply will have two terminals, and one will generally be connected to a common reference point called "ground". This point is most often not actually connected to dirt. It's just a handy reference label. If a circuit has multiple voltage supplies, they will generally have a common "ground" return. However, good supplies will give you the option of connecting one of the terminals to the AC ground line on your wall socket.

Suppose you grab a typical \$9\:\text{V}\$ battery and attach a \$1\:\text{k}\Omega\$ resistor across its terminals. A schematic of this arrangement might be drawn to look like this:

To achieve the circuit, two wires were used. (In electronics, these are often called nodes rather than wires. There's a reason for that but it takes a little time to fully apprehend the whys.)

There's no way to make a good argument here. No matter what value you pick, someone could argue a different value.

(I'm going to shift over to calling things nodes, not wires, now.)

Part of the point here is that voltages are always measured between two nodes. There is no meaning to a number applied to a node (in terms of applying the idea or units of a voltage to it) if it is not applied with respect to some other node.

There's another point I can now make. I can choose any one of the nodes and consider it to be the implied reference for all numbers I write elsewhere on the schematic. If I choose to assign such a "special wire/node" for this purpose, then it is called the "ground" reference. Then, when I write a number somewhere on the schematic or talk about specific values, others know that these are in reference (with respect to...) this assigned "ground" reference.

I can choose any one wire or node for this purpose. But only one, of course.

(This is not to be confused with an Earth ground, which is that metal stake in the ground your picture shows. That's a different meaning, entirely. Though it definitely has implications for the choice a designer would make when selecting a wire or node for a reference point in the schematic!)

Now, we could put a giant metal stake in the ground and do this:

If you were standing bare-foot on the dirt, your body would be likely making a galvanic connection to the dirt. And if you reached up to touch \$\text{Wire}_1\$ with a hand, you'd know it quick because your body would suddenly create a galvanic path from \$\text{Wire}_1\$ to the dirt and you'd experience a shock as a result. How much of one would depend on your body's resistance, the contact resistance of your feet to the dirt, and the resistance going from that point in the dirt over to where the stake was placed. But very likely you'd feel it.

It turns out that transformers, can develop a voltage between two wires just like the first battery circuit I mentioned, except that it will be AC instead of DC. But the transformer wires don't have to be galvanically connected to anything. They can float.

Suppose a transformer pole is located at the bottom of a hill and your house is at the top of that hill. The transformer on the pole supplies "mains voltage AC" to the home without touching any of the dirt in between the two locations.

Because of the fact that different parts of the Earth (and air in the atmosphere, too) can, for example because of thunderstorms, be at very different potentials with respect to each other (the bottom of the hill with respect to the top of the hill), it's possible that touching either side of a plug or the metal chassis of a toaster oven when standing on some dirt on top of the hill might create a "galvanic circuit":

This would NOT be a good situation to be in.

A solution is to do this:

This is also called a ground. But this is an Earth ground. And it serves an entirely different purpose and therefore a different meaning.

Now, it turns out that electronics designers are aware of this safety issue and they use this knowledge when designing devices you might purchase. And it helps other designers, when reading these schematics, to make judicious and careful choices of what wires or nodes within a schematic are labeled "ground."

So there is a reason why these terms may become "conflated" a bit. But they really need to be kept separated in your mind, despite that English users may not be as clear as you'd want when they say "ground."

A 'ground' could refer to one of the following:

This is related to protective earthing of mains operated electrical equipment. It is an installation of earthing conductors that connect non-current carrying metallic parts such as structures, enclosures, guards etc. to an 'earth pit' or a 'ground stake'.

In the event of such metallic parts getting electrified during fault conditions, the fault current flowing through the earth to the neutral would trip MCBs / GFCIs and thereby safeguard personnel, coming in contact with the equipment, from the risk of electric shock.

Chassis ground implies connections to the chassis of electrical equipment in order that it provides a return path for current or serves as a shield.

Chassis ground and earth ground may be interconnected to facilitate protective earthing.

Signal ground is a connection to the positive or the negative rail enabling one or the other to serve as the reference point.

Not the answer you're looking for? Browse other questions tagged dc ground or ask your own question.

1
Confused about the way this speaker is wired
2
Does signal ground have to be connected to actual ground?
0
Where to connect frame ground
33
Should I really divide the ground plane into analog and digital parts?
2
Shielded cable, to ground or not, in amplifier
5
Confused about opamp's inner "ground"
3
Why is the ground pin always connected to the "negative" power supply?
1
Portable AC power source earthing?