Why do speakers use clamp connectors?

Why do many audio speakers use clamp terminals to connect speakers one to another, rather than jack connectors?

TL;DR Because that's good enough, so why do more.

If you used plugs/jacks of some sort then you would need to either have manufactured cables of an appropriate length (long enough, but not way too long) or make them yourself. However, some people may place their speakers a few feet from the audio source and others may place them 50 feet (15 m) or even farther away. Plus, if a long distance also involves going through walls, behind furniture, etc., it is much easier to get a thin speaker cable through than a cable with plugs on the ends. Consumer-grade speakers are extremely tolerant of varying cable and connection quality.

A similar situation, but with a different result, is computer networking. Typical computer networking these days is using some variant of twisted pair Ethernet. This involves cables with 8 wires (though depending on speed and other factors, often only 4 wires are used) instead of 2 wire, but the big difference is that the plugs and jacks need to be installed to a relatively high tolerance. Install them incorrectly and you get slower speed, errors or possibly no communication at all, despite having continuity on every wire end-to-end. As a result, the normal setup is to use manufactured cables or to install cables with jacks on each end, normally (but not required) mounted to walls/ceilings/floors, and then use manufactured cables to connect from those jacks to devices (computers, printers, routers, switches, etc.). With Ethernet, it is not too hard to learn how to install jacks, and the basic tools are inexpensive. But installing plugs on the end of cables, while possible, is not easy or inexpensive to do, or at least to do very well.

Speakers just need to reproduce a low frequency signal - on the order of 20 kHz. Bare wires jammed into spring-loaded connections are good enough. More will cost more, but it provide little benefit except, maybe, to audiophiles. Ethernet started at 10 megabit/sec and has progressed to the gigabit/sec range. It needs the high quality of properly installed plugs and jacks to get the signal through. Audio simply doesn't need that.

Spring clip speaker terminals are economical and dispense with the need for mating connectors on speaker cables.

All that they require is cable ends stripped of insulation for easy 'clip-on' / 'clip-off'.

They also permit the use of thicker cables.

Speakers tend to be fitted to the wall. Jacks take a lot of space, clamps rarely protrude beyond the body of the speaker. This is especially valuable when you consider that you usually want to orient speakers towards the listeners, which usually means being mounted high up, and slightly tilted downwards.

Note that other pieces of audio equipment do use various connectors, like jacks and cinches. They don't have the same limitations as speakers - and indeed, jacks and cinches do appear often enough with free-standing speakers, including computer speakers. It's also only useful when the connectors are standardised - perfectly fine with computers or walkmen, but not so much for restaurants or clubs. And then you get someone like Apple breaking off even those tentative standards.

Are they harder to use? Honestly, not at all. It's just that you're looking at their use from a different perspective than how they're actually used. With a headset, you expect to connect and disconnect the device often; jacks make perfect sense. They are more durable and less prone to causal misuse. But speakers are often installed more or less permanently, and then you also tend to make wires to length - and I'm sure you can appreciate how much easier it is to simply plug the stripped wire ends to a clamp than it is to attach a jack.

Cables are less flexible and more expensive than wires. Why use them when wires (for this application) tend to be more beneficial in the first place?

Cheap speakers generally use this type of connectors, which are ideal in this application. 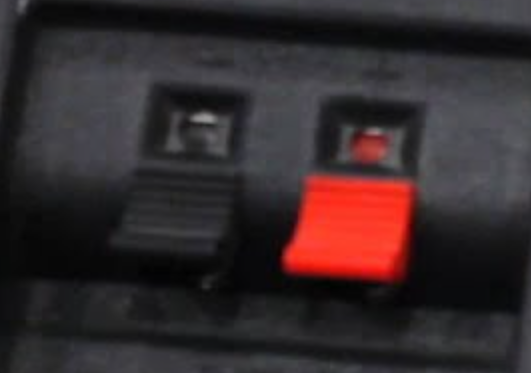 The user will probably want to hide the cables, or string them behind shelves or thread them through small openings and conduits, and a large connector would prevent that. These binding posts allow use of any lamp cord, and the user can cut it to length, replace it, and change the color of the cable to hide it... It is also thin, so the speaker can be placed against a wall without a connector protruding. Contact is pretty good and reliable because the wire is squeezed between the contacts by a spring. Basically, these are cheap and they do the job very well. For this application, you don't want connectors.

The only big drawback is you really have to remember to turn the amp off when fiddling with the wires, because they will probably short while you do so. 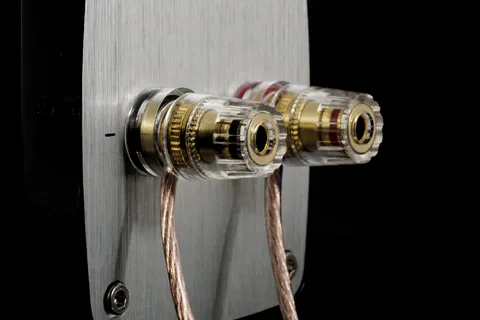 If you get high-end speakers, you won't put them against the wall, because that makes the bass response ridiculously bad, so protruding connectors are less of a problem. That said, these binding posts are garbage when used with bare wire, because speakers vibrate, so they unscrew over time. The screw part is useless, and they're only reliable when used with banana jacks. So, ironically, the "high-end" gold-plated stuff is worse than the cheapo springy binding posts.

Pro-audio/stage gear always use connectors, because they must be installed quickly and often, and with correct polarity. Sometimes it's a 6.35 mm jack for low power, which is a terrible connector for this, because it shirt-circuits at insertion. Sometimes it's XLR, which is decent. Both jack and XLR are hazardous to the survival of the rest of the equipment, because then you get cables lying around with one end connected to a power amplifier, and the other end offering a connector that will fit just right into a lot of other stuff that should never be connected to the output of a power amplifier. And last, we have Speakon connectors of course, which are just awesome: 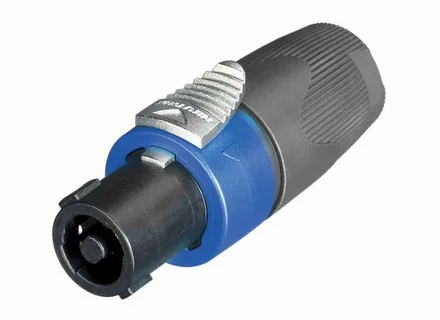 Addendum: No established standards that would be suitable.

Generally common standards for pluggable speaker connectors, and their problems:

By using clamps, the end-user can cut the speaker wire to any length without having to terminate it.

Speakers typically have "clip" or "post" or "banana" connectors. There is a reason not to use more convenient connectors such as RJ45: It is the ability to handle heavy gauge speaker wires in the case of long wire runs.

Heavy gauge wires are not needed for simple one room setups of 10ft wires into 4 or 8 ohm speakers. However, that changes starting at about 25ft runs. That is because high fidelity requires a high "damping factor" and the damping factor is affected by high speaker wire impedance. (Smaller wires or longer runs have higher impedance.) Damping factor is especially critical for realistic bass sound--in particular percussion instruments such as drums.

So it makes sense for speaker manufactures to not limit their use to 10ft runs, thus they must accommodate heaver wires. Here are the some wire diameter vs. wire length vs. speaker impedance (ohms) information:

1
How to drive high impedance PA speakers
1
Wiring a 3.5mm Audio out jack where Speakers were previously
0
2 x 60 Watt audio amplifier with 4 Ohm speakers
1
Connecting an arduino to desktop speakers
0
How do I set my speakers out of phase?
2
Connecting 2 1W speakers