Can this resistor be replaced by a wire or fuse?

My power supply got broken. Upon further inspection, I found out that the high power resistor (15 ohm, 10 W) was broken. 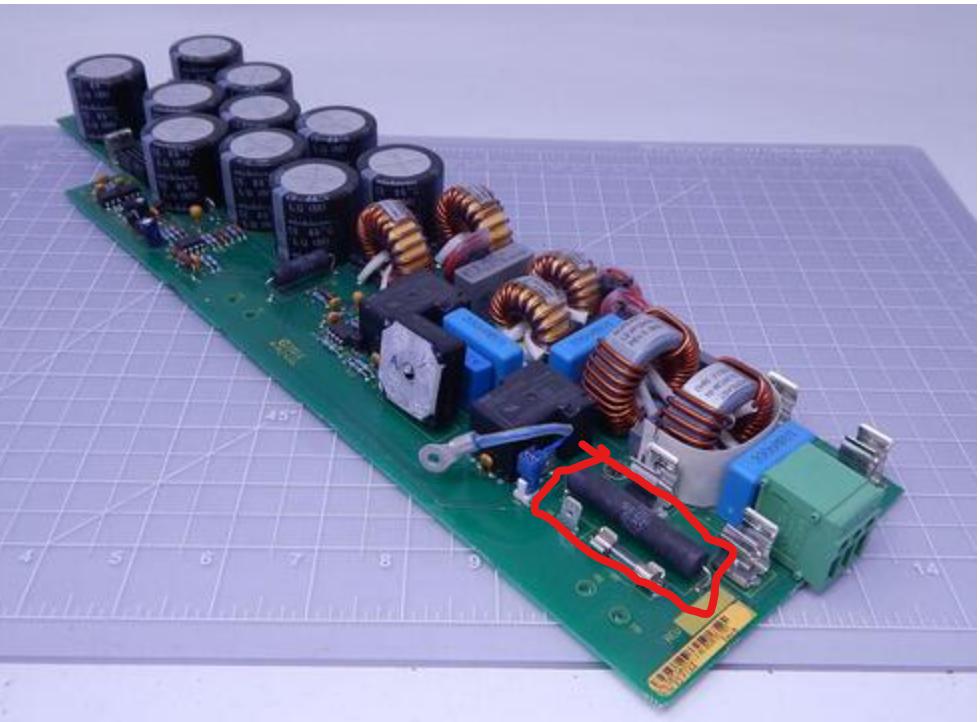 Unfortunately, I can't purchase such a resistor (with the same specifications, not to mention the same brand) and I don't have the schematics and am not sure what exactly the resistor is for (what devices does it limit the current for?) and I am wondering how dangerous would it be to:

How appropriate do these options seem? Is there another way to solve the problem?

The brand is not relevant. And you can most definitely buy a resistor that would fit, i.e., with same resistance and approximate power rating.

You're assuming that the rest of the supply still works. That may or may not be true...

Harder than reverse engineering the supply to understand why the 15 ohm resistor was there? Nah, I don't buy that, unless your time is free... You can in fact do both: order a resistor from China, for cheap, but with slow delivery. In the meantime, reverse-engineer the supply at least around the resistor. Then you'll figure out what the resistor is for, and that in most likelihood it was needed :)

I've already tested the rest by applying fuse for few seconds, PCB provides expected outputs, so not 100% sure but 99% everything else works. What's your opinion on suggested workarounds?

The designers used a resistor for a reason. You'd have to reverse engineer the circuit, make sure you understand their reason, and then satisfy yourself that the workarounds won't break something. Engineers don't put such elements in the circuit for no reason. Do not use a wire or a fuse.

With out a schematic it is difficult to know how important the exact value of the resistor is. Using a fuse or wire short would not be adequate at all. (Even if it does initially work with one of those it would most likely fail after a short time under load, or you might damage the equipment that is being powered with the supply.) Other than a proper value replacement some options would be to use multiple resistors to create a replacement resistor. For example you could use two 30 ohm resistors wired in parallel, or two 7.5 ohm resistors wired in series to create a 15 ohm replacement. The replacement resistors would need to have a wattage that totals up to (or greater than) the original part. You could even take this idea further by using 3 or 4 resistors to recreate the correct value of resistance and wattage. With equal value resistors the required wattage for each divides equally.

Many power supply designs may be subject to inrush currents that, depending upon the line phase when a device is plugged in, may exceed normal operating currents by an order of magnitude or more. Even if it would take 10ms or less for currents to fall back to normal, such a massive over-current event may be sufficient to cause damage even within that short time. Adding a series resistor to the input of a power supply stage will generally reduce efficiency, but also makes it easy to quantify the maximum possible inrush current. Bypassing such a resistor may result in a supply that will work, at least for awhile, but will be susceptible to damage from high inrush currents. While some resistors may be unnecessary (because a variety of factors would limit inrush currents even without the resistor) the amount of engineering effort necessary to determine that a resistor may be eliminated may exceed the amount of engineering effort that was expended on the entire power supply design.

11
Fuse blowing in 12 multimeters rated for 200mA, only measuring 12.5mA. Why?
2
Overload protection for battery
1
Critique for my short circuit indicator and guidance to improve it
0
Can you identify this fuse?
0
What fuse can I use to replace a Hitachi FN00373
2
Need help identifying this fuse resistor
7
Fuse 125V/4A can be replaced with 250V/4A?
1
Trying to source a PCB component (a slow blow fuse I believe!)
0
How to prevent an electrical motor surge from repeatedly blowing the fuse when it stalls?
7
Limiting 1000 µF capacitor inrush current to protect fuse and power source