Current is a measurement of the flow of electrons. An ampere (amp) is actually how many coulombs (6.241 x 10^18 electrons) move through a single point every second. There are a few different types of current, the most common two being AC and DC. While typical batteries produce a current that only moves in one direction (DC), power is transferred over long distances and into homes by way of alternating current (AC).

Alternate literally means to pass back and forth from one state to another, and with electricity, this happens in the direction of the current. For half of the cycle, the current flows in one direction; it then switches direction and flows backwards. Positive current is typically represented as flowing from the positive terminal of a power source towards the negative (even though, technically, electrons are moving in the opposite direction) so the first half of the cycle is positive. Since the current reverses direction, the second half of this cycle is considered negative. But remember, that only means that the current is flowing backwards in the circuit.

The voltage output follows this current flow. At the switching point, the output will be at 0 volts. It will then rise to the peak voltage level half way through the positive cycle, then start to decrease until it is back to zero. This is when the current switches direction, and the voltage will start to drop (be negative), hitting the negative peak half way through the negative cycle. After this, it will climb back up to 0 volts where it switches direction again, starting a new positive cycle. This is why alternating current is seen as a sinusoidal wave.

Rectification is the process of transforming the alternating current into an entirely positive pulsating current. It is typically done with a diode bridge because diodes will only allow current to flow in one direction through them (unlike a resistor). Just two diodes can be used to limit the current flowing into a circuit as only positive. This would be half wave rectification. As shown in the following image, the placement of the diodes will determine which half of the cycle is seen by the circuit - positive or negative. The arrows denote the current flow direction. 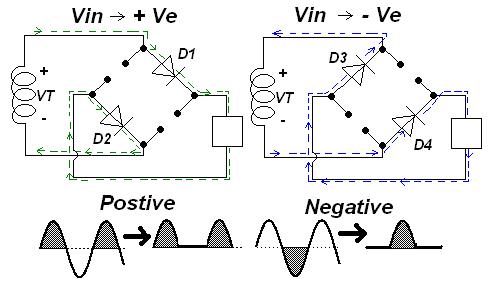 A full bridge comprised of four diodes is used for full rectification. It is created by combining the two halves shown in the above image. This bridge ensures that no matter the direction of current, the circuit only sees a positive, pulsating flow.

For this current to be further transformed into DC, a capacitor would be used to smooth the pulses into a straight line with a small ripple. The value would be a little less than the peak voltage. 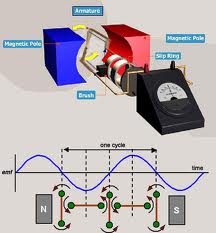 I am assuming that you are familiar with the concept of magnetic flux linkage So as you see in the image the coil is rotating. An we know that the magnetic field is from the north pole to the south pole. So when the area vector of the coil is perpendicular to the direction of the magenetic field the time the flux linked is with the coil is 0 since $d\phi$=$B.ds$ where $ds$ is the vector of the coil, since it is a dot product and $cos(90)$=$0$ so the whole expression turn's to be 0. Now when the coil starts rotating the angle between the magnetic field vector $B$ and area vector $ds$ changes and the flux linked to the coil changes due to which current is induced in the coil and it starts increasing as the coil rotate and increase till the angle between $B$ and $ds$ change to 0 which is the point of maximum flux linkage and the graph reaches to the peak point as shown in the fig now when the coil rotates further the flux linkage starts decreasing and changes to zero, this is the positive half cycle of the ac circuit. Now when the coil rotates further the flux linkage again starts increasing but this time in opposite direction so the graph goes down in the same way as before it went up but this time it means the current is flowing in opposite direction. That is the negative half cycle of the ac circuit. The two half cycles only tell us the direction of the flow of the current the upper half and the lower half flow in opposite direction's. Now your next qustion. I have answered it earlier to someone else it is about working of full wave and half wave rectifier The first half is half wave rectifier and the second is full wave. Read it if it helps you then its okay or else I will explain it to you in a different way. Here is the link(https://physics.stackexchange.com/questions/55698/what-is-the-role-of-center-tapping-in-a-full-wave-rectifier)

1
Correct negative current measurement but incorrect positive measurement
1
Why do cables and batteries have a positive and a negative side?
4
Does electrical current flow from positive to negative or negative to positive?
0
current flow from positive to positive between batteries?
1
How can I amplify the current out of a triangle wave generator?
1
Half Wave Rectifier with Capacitive Filter
3
How to set a positive and negative current from arduino?
1
center tap transformer full wave rectifier current rating
0
Switching positive and negative voltage
1
Inductor Saturation Current and Temperature Rise Current