Can a memory backup supercap hold on for more than 2 weeks?

Most RTC chips have a VBATT input for backup power supply; besides a battery, you can use a supercap there, e.g. using the following scheme: 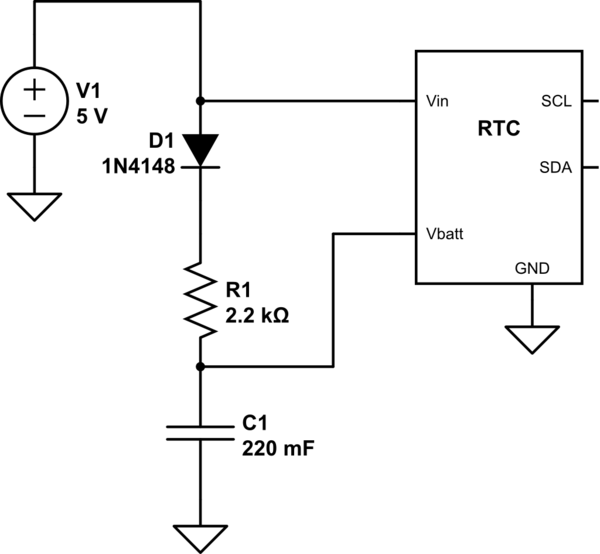 How much time would the cap provide for your RTC while the main power is not available is of course function of the RTC's current, C1's capacitance, and the various leakage currents.

The leakage currents of supercaps seem to be not well characterized; in fact, a lot of datasheets omit that value at all, so it's likely nothing to write home about (20-100 or more µA).

Of the few models that actually list something, for example

it can be computed that they are unlikely to last more than a week in RTC backup operation. Their leakage is just too high.

Not a shopping question

I'm not searching for a specific cap model that would fit the bill; I've pored through a lot of datasheets, and haven't found any. I think I may be mistaken to use a supercap there in the first place, as per question #1 above.

Is it possible to deal with this imperfection? Is a supercap suitable for this design at all?

The only way to really answer this for yourself is to let the rubber hit the road: you have to do some experiments and qualify the supercaps for your use. You'll be able to quantify their parameter spreads, the leakage vs. temperature dependency, etc.

That's basically how engineering is done when you want to get most of the parts. You have to almost understand them better than the manufacturer does, focusing on your particular need.

Can more than 1 week of autonomy be achieved? I'll be happy with at least two weeks

Your experiments will give you the answer. Nobody else can answer it for you in general terms, because there's so much variation in parts, that you might be selling yourself short on nothing but someone else's word. It will also help you a lot to really understand these parts, and nothing can do this as well as good old lab work.

How is leakage defined?

In whichever way generates most sales generally speaking :). Customers tend to read what they like to see, and not necessarily the grim (-ish) reality. Plenty of products get marketed with nothing much but putting a prototype together at room temperature and calling it a day as soon as some measurements let you extrapolate to "good enough for Australia". That's why HP equipment, for example, was as good as it was: they did the very opposite. They did test all products across the operating temperature range, including aging effects where applicable.

D1's leakage is in the order of 20nA and can be ignored.

It is at room temperature, and then is it typical or maximum leakage? Since you have to qualify the supercaps for your application anyway - no way around that - you should characterize the diode for this use at the same time. You'll be sticking the thing in a small thermal chamber anyway, so you get to characterize the diode leakage, PCB leakage, RTC leakage, and everything else at the same time. Good deal, if you ask me.

Yes. You'll need to qualify each lot of parts you get for this application, until you understand the level of inter-lot variation, in order to relax the level of incoming component testing.

The alternative is not sleeping well at night and/or having to occasionally turn into a firefighter and extinguish figurative fires in the production department.

If you want to do this job once and not have to repeat it later under stressful conditions, it's best to have all these procedures defined ahead of time, so that when the product is on the market, you'll get clear indicators from incoming test and statistical QC that something is wrong, before it would get more costly.

Skimping on a memory backup mode that is not a normal operating mode where you'll get instant field failure reports or end-of-line test failures as soon as a problem occurs is... unwise. It's easy to unknowingly ship junk, primed to fail later. Not a good place to be in... Thus I highly encourage doing everything you can to put a lot of due diligence between yourself and such a precarious position :)

6
Supercap charging circuit for RTC backup on STM32
3
Supercap for Backup Power (10 hours Backup Time Min.)
1
Battery auto backup for GSM
6
Coin cell battery recharging circuit for RTC backup power
1
How to calculate how long a supercap can provide power
0
Only Provide Backup Power to One Device On Bus With Cap/Supercap
0
5 seconds power supply backup for 12V 0.5A router
1
What does "Voltage Holding Characteristic Minimum" refer to for a supercap?
5
Pitfalls in charging a supercapacitor from a small solar panel