How does this NOR gate S-R latch work?

I am unclear who the NOR gate S-R latch works.

If the input of one depends on the output of the second one, and vice versa, no output signal can be generated until we have a single gate output. 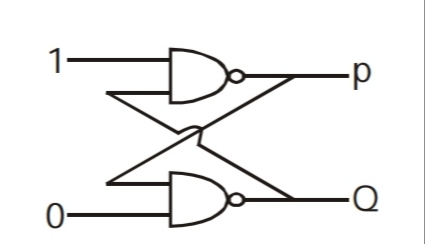 if input of one is depandant of output of second and vice versa.

Where it gets interesting is when both inputs are 1. Then the flip-flop will hold whatever state it had when one input was 0.

But what if both inputs are 0? In that case both outputs must be 1. Making one input high again would allow the other input to set that state. If both inputs are made high at exactly the same time then the state 'flipped' to will be random.

10
How does electricty flow in a flip-flop circuit? I can't understand how memory bits work with NAND gates
15
What is the beginning state for Q in a SR latch?

15
How to understand the SR Latch
4
A question about how RS latches work and the time an input needs to stay high after it has been supplied!
1
This flip flop does not work properly
1
Flip-Flop Made with 74xx Chips not Latching Consistently
1
How does an RS-latch work in the presence of propagation delays?
0
Difference between low signal and no signal for a SR latch?
1
Why is there no race around condition in NOR SR latch when S=R=0(initially)?
1
In SR latch when apply a pulse to reset latch how the Q is changed?
3
How does an SR-latch actually work?