I am starting my first project in electronics and I am having a hard time understanding the information available in the 84A's datasheet (pg. 179, Electrical Characteristics)

While drawing the schematic to my project I've not really been able to understand how to calculate the various resistor values for a couple of different situations.

A side, but very important question: is the output current on a pin only defined by what's "ahead" of it? Can I "hurt" the MCU if too much current is being drawn due to low resistor value with a LED like the image below?

With the exception of calculating the resistor for LED case (2V drop and 12.5mA) I don't really know how to approach the remaining ones. 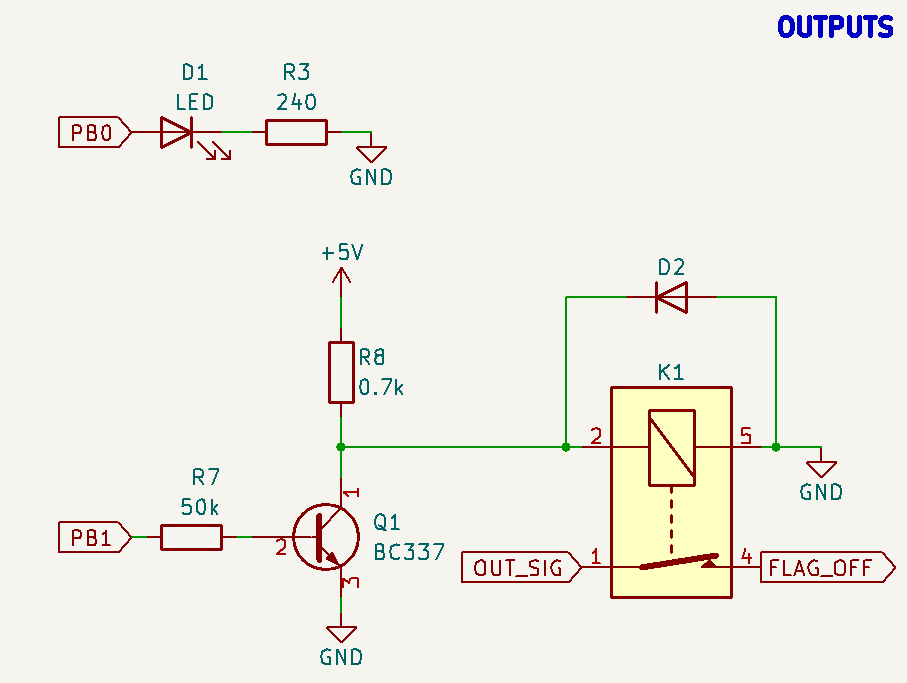 Should I use a MOSFET instead of the NPN transistor?

There are a few things to address here:

Now we finally get to your question #1. You didn't provide a schematic of the example you gave, but I'll presume it is roughly:

If the pull up is activated isn't already a 50k Ohm resistor in series? Adding a 10k one wouldn't just up the total resistance to 60k?

When you configure an MCU pin to be an input, you can specify if it should be pulled high or not; here's the relevant text from the datasheet (§10.1.1):

The internal pull-up resistor is between 20 and 50 kΩ (according to the datasheet), so you are correct in that adding an additional external resistor simply increases the resistance to the sum. However, consider what happens when you accidentally configure the pin as an output pin and connect it to VCC, even temporarily. Without the external resistor, you would have a short circuit and the resulting current would release the magic smoke in your MCU. Also consider cases such as what is the default state of pins before you program the MCU? Or when a bug occurs and changes pin states unpredictably?

How do I chose the values for my base and collector resistors having in consideration current consumption? Are there guidelines to find a balance?

BJT NPN transistors work by having a current from base to emitter. There is far more detail than I can possibly cover here, so you should research transistor operation. Essentially you need to provide a small current (from base to emitter) in order for the transistor to pass a larger current (from collector to emitter). The "guidelines" are going to depend again on supply voltage, microcontroller limitations, the current you wish to switch, and the specifications of the transistor. With a 50 kΩ resistor, and treating the transistor BE junction as having a 0.7 V drop, you should expect roughly (4.3 / 50k) 86 µA. DC current gain of a BC337 is somewhere between 100 and 630, so optimistically that would work out to pass a CE current of 54 mA.

Skipping to your last question: Should I use a MOSFET instead of the NPN transistor? Perhaps, depending on what you're trying to do. A MOSFET may be much simpler to implement if all you want to do is switch a relay on and off. But it's not clear what you're trying to do from your schematic, which I'll address in the last part of this monstrous answer...

Looking at your schematic, let's examine what's happening with R8, D2, and K1. (As Marla pointed out in comments, D2 is backward from what you probably want.) Consider 5 volts applied at R8; ignore the connection to Q1. Current then flows both to D2 and K1's coil to ground. The diode is forward-biased (meaning its anode is more positive than its cathode) and conducts, but has a forward voltage drop of ~0.7 V. The coil of K1 will have some resistance, let's say 178 Ω (based on a random relay datasheet). Very roughly, this means about 2.8 mA of current flows through the diode while 3.5 mA flows through the relay coil. (I just quickly simulated this using Falstad to get these values.) Whether that's enough current to operate the relay is not important; what I'm trying to show is that as-depicted, the relay will have some current flowing all the time.

When the transistor is switched on, it provides a third path to ground which will do little more than draw additional current from the power supply and not affect the relay at all (unless the power supply can't deliver current, and... that's well beyond the scope of this answer).

Without making this answer even longer, I recommend you research how to drive a relay with a microcontroller. In particular, also research freewheeling or flyback diodes, because that's what D2 is probably meant to be.

I would expect you probably want something like this: 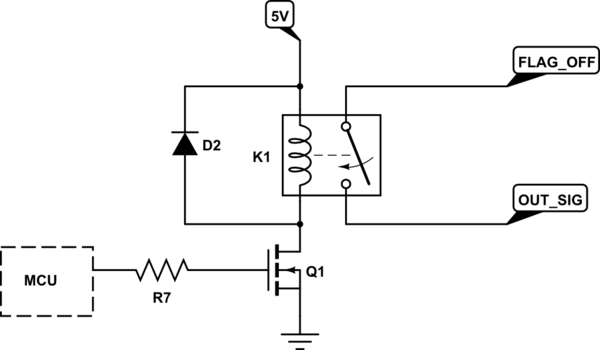 Hopefully this helps to clarify some of the things you're asking about and some of the concepts you're confused about. Here is a collection of other questions that may interest or help you as well:

Not the answer you're looking for? Browse other questions tagged microcontroller transistors mosfet resistors or ask your own question.

174
How does the current know how much to flow, before having seen the resistor?
79
When is a MOSFET more appropriate as a switch than a BJT?
46
Why is there a diode connected in parallel to a relay coil?
37
Selecting a MOSFET for driving load from logic
6
Does a BJT controlled relay need protection diodes?
4
Why drive a relay with a transistor switch?
12
Which resistor for NPN transistor base?