How is current the derivative of charge 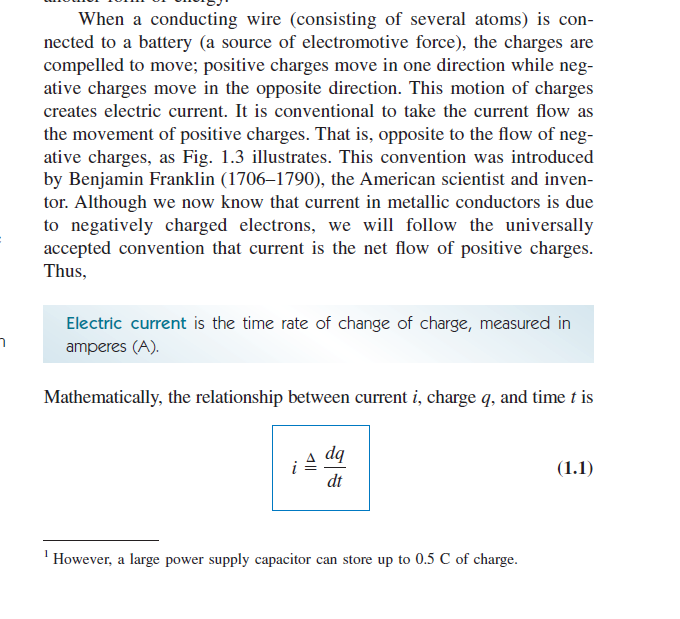 If electric current is the time rate of CHANGE of charge. Then if I have a DC fixed current flowing into a resistor, same amount of charge is always flowing to that resistor, hence the derivative of charge is 0, so current is 0?

Or does the book mean that the electric current is the time rate of change of charge TRANSFERRED - in that case, the total q transferred will always be increasing, hence it is possible to have a fixed current?

Current flows through things. Even a capacitor that stores up charge will have the same amount of current coming out of one terminal that's going into the other.

So the current through a wire is defined as the amount of charge that passes by a point in the wire at a given time.

The equation mentioned in the book seems to be in the context of a battery, I think. Here, the "time rate of change of charge" is talking about the "charge of the battery". From this perspective, relation (1.1) is certainly true. But time rate of change should not be taken too literally: the book mentions that "current is the net flow of positive charges", but there obviously is no net flow of positive charges into a resistor and a resistor does not accumulate charge, so also dQ/dt=0. That would be a contradiction.

In both cases we can legitimately call it "current" because their unit is Ampere:

If electric current is the time rate of CHANGE of charge. Then if I have a DC fixed current flowing into a resistor, same amount of charge is always flowing to that resistor, hence the derivative of charge is 0, so current is 0?

Current is typically measured as either the amount of charge flowing past a point on a 1D wire in simple lumped circuit models, or charge flowing through a surface in more sophisticated models.

The current into each terminal of the resistor is not zero. But the current into one leg is going to have opposite sign of the current going out of the other leg. So, the sum of the two currents would be zero.

This is analogous to Kirkhoff's current law where the sum of the currents into/out-of any node is zero.

On the other hand, if the net current into a region of space is not zero, then charge would be building up and we would have an electric field according to Gaus's law

There is no error in the excerpt in question.

Current flows thru the resistor. Ideal conductors remain neutral. However, there will be charges in the insulating medium attracted and surrounding the conductors from the Electric field.

The current would simply be measured across resistance as I=V/R.

Since all conducting wires also have a dielectric which includes air , two isolated wires in close proximity will always have a capacitance between them and can transfer charges when the electric field is rapidly changing Ic = C*dV/dt. All wires also have inductance which can store some insulation energy as current from the square of the charge carrier flow rate Ec=½LI².

Thus for high frequency AC, all wires will have some impedance due to this ratio of conductor current and insulation current and can be expressed in terms of the reactive lumped values Zo=√(L/C).

The average velocity of a charged particles is NOT current. That's called Drift Velocity.

The velocity of the wave of charged particles is NOT current. That's called the wave propagation velocity, which is equal to the speed of light.

"An electric current [Amps] is a stream of charged carriers , such as electrons or ions, moving through an electrical conductor or space. It is measured as the net rate of flow of electric charge through a surface or into a control volume" (using volume resistivity). However, conventionally using lumped elements current is measured by the voltage drop across a known precise very small resistance called a current sensing shunt resistor.

There is a vast number of free charges in conductors that can be excited to move from a voltage source across a closed circuit loop with low resistance. I=V/R Voltage is just the potential to move charges. Current can flow in insulators according to an exponential rate and their capacitance C. These charges are then stored. Q=CV by a rate of change of voltage Ic = C dV/dt.

1
What happens to a DC current at the end of a wire?
0
Can an electron carry only one charge?
2
Number of electron with a current of 1A
0
How can an electron have 0 electric potential after exiting a resistor but have current?
3
How can electrons in a tungsten filament release infrared light photons?