I've made a AC-DC step down buck converter that converts 220 VAC to a variable 45 to 70 VDC at 5 to 10 A to charge a Li-Ion battery. I'm currently using ESP32 to drive a MOSFET driver (IR2110) to drive my NMOS placed at the high side of the circuit. The switching frequency is 20 kHz. I also made a crude closed loop control based on current readings (with ACS712 Hall effect Sensor) to increase or decrease the duty cycle. Below you can see my buck converter and gate driver circuit.

Fig 2. Buck converter circuit. (Do note that the current sensor mentioned above is placed at V_OUT)

My current problem is when the buck converter output is more than 1 or 2 A, the NMOS breaks (it acts as a short circuit), even though the NMOS is rated for 600 V and 40 A, as you can see here in the datasheet.

Below you can see the details on the failure

Because I only have a low voltage oscilloscope, I tried connecting 5 V directly to the HVDC node (see Fig 2) to give the system a 5 VDC input, to see the Source-Ground voltage characteristics when switched on or off. There's a bit of ringing (at approximately 20 MHz) and spiking (5 V spikes, in addition to 5V ON voltage) when the NMOS is switched ON or OFF. I've tried various snubber design and component values but I can't seem to remove the ringing and spiking fully. My guess is that when powered from 311 VDC, the spike is also bigger in value, and thus breaking the NMOS. However, I have yet to observe the spike voltage when connected to 220 VAC mains.

I tried to follow ROHM's guide to selecting snubber component values, and a snubber design from Ned Mohan's book Power Electronics, as shown below.

Fig 3A (left). Ned Mohan's Snubber Design for low side switch
Fig 3B (right). My snubber design for high side switch

The measured source-ground voltage is shown below 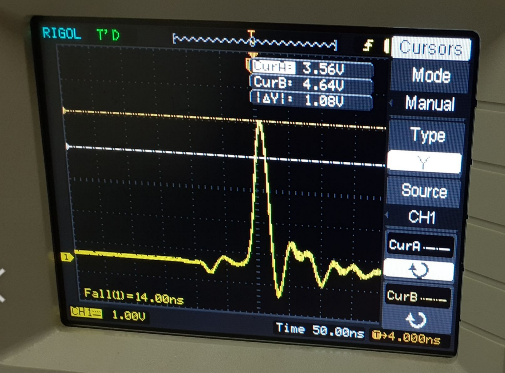 Fig 4. Source - GND transient voltage when no snubber attached. Voltage spike is at 4.64V (cursor B) 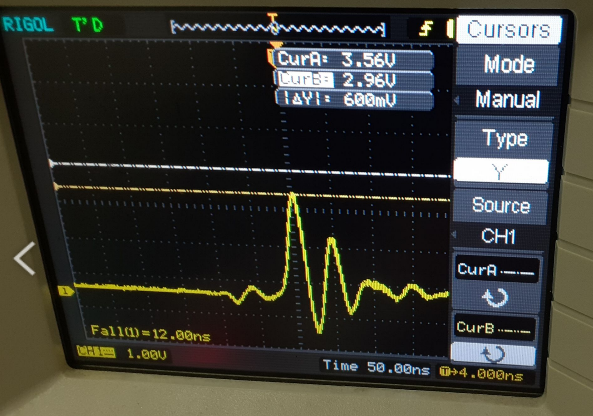 My questions would be:

If it helps, the PCB design can be seen below. There are some components that are not shown in Fig 1 or 2, it's just a relay and a discharging resistor. Do note that the relay is not present when the failure happened. 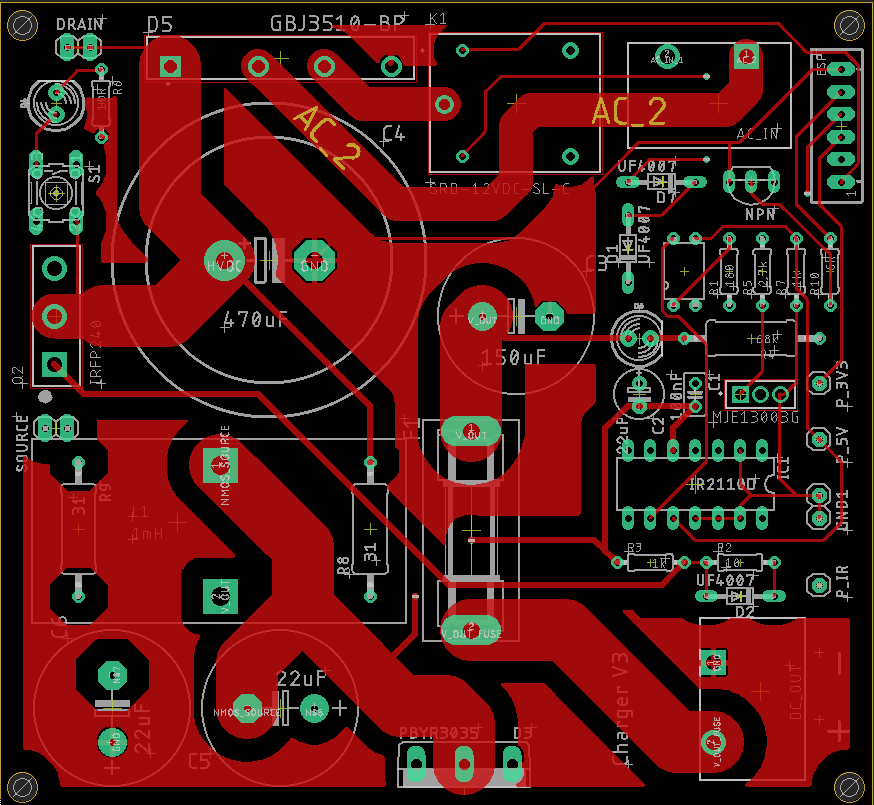 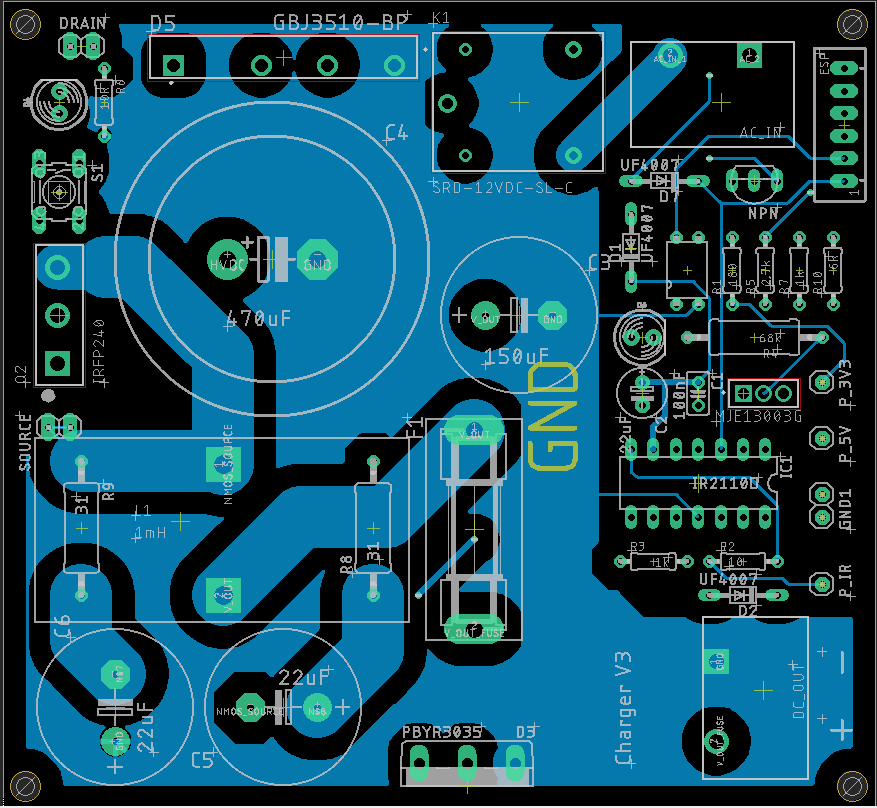 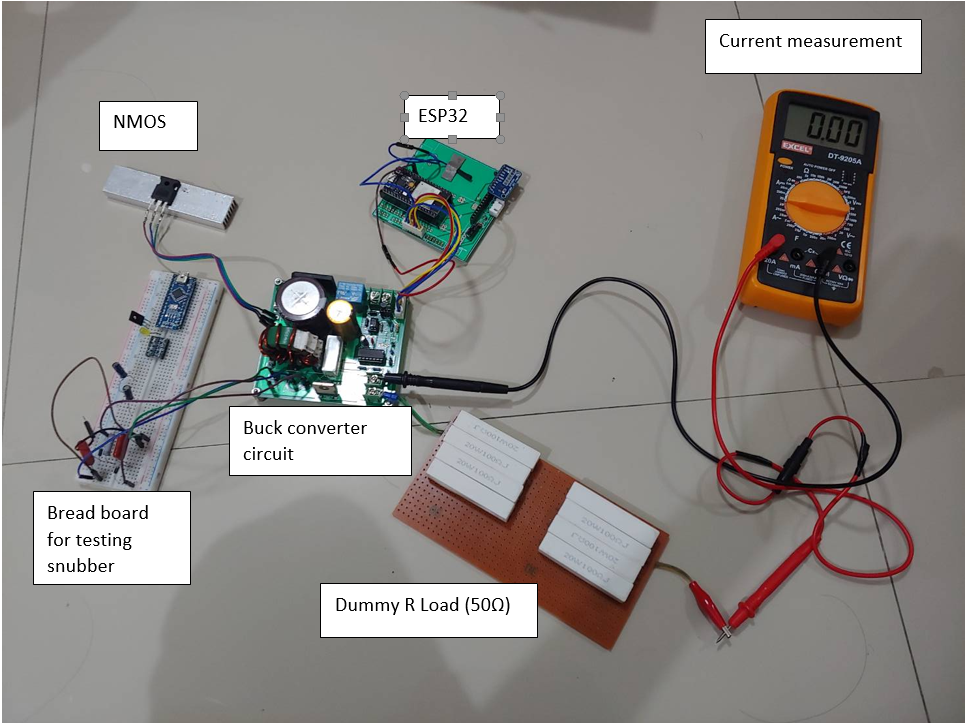 Fig 8. Prototype layout (only for snubber testing at 5 VDC). I know that soldering the NMOS like that is a huge safety concern, but this setup is only for testing the spikes and ringing I described above with 5 VDC input connected straight to the drain (HVDC node at Fig 2). When the failure happened, the NMOS is soldered straight into the board.

My advice is you to get a proper working voltage equipment. All you need is a 10:1 or 100:1 probe. Otherwise you are working on the assumption your test circuit represents the real thing, and that is not always ensured.

One thing I noticed after a quick look at you PCB is how far the regulator is from the mosfet. It should be as close as possible and with traces not changing layers (vias add impedance). You may say 20 kHz is a low frequency and indeed it is, but it affects the on and off edges that you want as sharp and clean as possible.

The fact that with 12% DH you get 51 V puzzles me. That voltage relates to a 16% DH or 8 us ON time, while 12% is 6 us. I would look for those missing 2 us, maybe some software delay? Or it could be some analog delay on the optocoupler, etc. (they are far from instantaneous)

I would say it's a PCB layout problem. Critical connections (basically around the mosfet and sensing) need to be short and straight. I find components too spread apart (inductor, diode, mosfet) especially the driver and sensing connections.

How do MOSFETs fail? Besides the common static values over the maximums, there is the dV/dt failure, typically understood as Vd spikes, but it actually refers to Vds variation (dVds/dt). In your case we can consider Vd fixed but Vs being at the mercy of the inductor and diode after turn off, have you checked that with LTspice? All you need is the models.

Your diode D6 is the problem. The datasheet of this historical component says 35V max reverse voltage! You need 400V or more here. The diode either died at the first attempts to start the circuit and vanished. Then there is no regular path for the inductor to drain it's magnetic energy. The other option is, that the diode is still alive and operates as power Z-diode. Then it's a fight fet versus diode and the diode wins it. The current in fet and diode is the same, but the fet has 250V across and the diode 50V. So most of the energy is dissipated in the fet.

I'm also worried about the optocoupler. Use an >= 1MBit digital coupler here and split up the connection between ESP GND and SMPS GND for your own safety.

Another issue may be, that the voltage across C2 (22uF) may drop too hard to keep the fet fully on. Initially it's fully charged because VOut is zero, but it will only be recharged if D3 is conducting. This time is short at light load and low duty cycle. Your safety resistor R3 is unusual low (1k) and consumes 10mA during fet on time. To me it's not clear that the gate driver voltage is stable during t-on. The IR2110 will not start a new on-time in undervoltage condition, but I think, it will not abort an already running cycle. It is possible that R-On is rising and the fet ends up in a half conducting state with some hundreds watt peak power with danger of oscillation as a consequence of the long source wire. If there is a >10MHz oscillation running, it may not even turn off at all until it's melted.

To my surprise there is no local capacitor on board to stabilize the +12V supply. So the reload path via D1 is very long and inductive, even going through the ESP connection wire! The IR2110 will also miss a cap close to pin 3.

There is no capacitor on board to stabilize the +5V for the IR2110 and the coupler, this is not acceptable. The physical location of a capacitor ist very important, it's not enough to have one on the ESP board.

R5 in your snubber design will have a short life while directly feeding the output from 311V.

This PCB design will not work, even if you think it works. It's an EMI nightmare, and won't be reliable long-term, as various components are likely overstressed due to everything ringing like a bell tower.

One PCB side - top side to make things easiest - should be solely ground. The bottom side should have all the other connections. You'll need to realign the components to minimize current loop areas, and to make it possible to implement the circuit using a 2-layer board with one layer dedicated to a ground plane.

The critical loop areas are:

You should literally draw these loops on the printout of the layout, and estimate their area. The area of high-current loops should be ideally below 1 square inch. The area of the gate driver loop should be 1/4 square inch ideally. The through-hole components of course do you no favors here, but it should be possible to at least close to the target areas with judicious design.

I have no idea what function does the optocoupler serve: it doesn't actually isolate anything, but it does destroy the signal integrity of the PWM waveform for sure.

You probably don't need the bootstrapped high-side gate driver. A basic low-side driver will work fine. The idea is to put ESP32's ground level at the NMOS source. The output voltage can be measured by converting it to a currents that drives a LED-photodiode optocoupler, then using an op-amp to convert the photodiode current to a 0..3V voltage for ESP32's ADC.

I presume that the idea is to have the ESP32 connected via WiFi, so it doesn't matter what exact potential it sits on.

There are other problems with the circuit design, but other answers mostly cover that.

For diagnosing such circuits, you'll want to integrate various voltage/current buffers, using fast op-amps/differential amplifiers, directly on the board, so that you can then just attach probes to buffered outputs and not worry about the probes adding capacitance/inductance to the circuit. These monitoring circuits will have to be surface mount and a tight layout close to the source of the monitored voltage or current.

Basically, to learn how this works (or not), you'll need to implement instrumentation directly in the design. You can leave it unpopulated for high-volume production, but those components can then be always added for service/maintenance as needed. Ideally, you'd just leave them in - at low volumes (<1000), it makes no difference in product price, as your time has way more impact on the cost.

Turns out, my main inductor (L1) is saturating due to its very high permeability constant. I wound a custom inductor with a permeability factor of 10 with ~200 turns to get 600uH, and the buck converter works as intended.

Although, there's some inconsistency with the driver circuit (heats up and dies randomly), and I ended up changing it to TLP250 for consistent driving capability. I'm not exactly sure why this happened, but from what many people commented on this thread, IR2110 is not suitable for high side driving only