Why do we see one, unified memory address space in ARM Cortex-M core based MCUs even though they have Harvard architecture?

Most of the ARM Cortex-M core based MCUs have Harvard architecture (except for Cortex-M0 and M0+.) 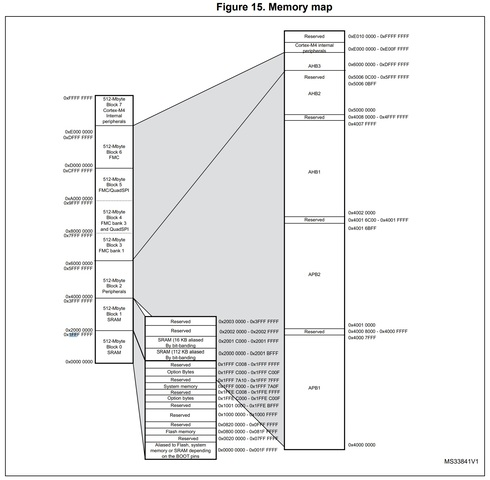 If ARM Cortex-M based MCUs have Harvard architecture (in most cases,) why do we not see two separate memory address spaces - one for data and one for code instructions - instead of one?

When you pick a STM32F4 chip at random and look at the datasheet, in section 2.2 we see a block diagram of the chip.

We see that the CPU has three (!) buses - labeled I-BUS, D-BUS and S-BUS. All of them go to the "AHB bus matrix" and the D-BUS also goes to some "CCM data RAM".

So the processor acts as a Harvard architecture below 0x20000000 and von Neumann above that.

However, if we go back to the chip datasheet, in section 2.2.7 (after the page break) we see a diagram of the AHB bus matrix which interconnects the different buses to different memory components on the chip. We see that the I-Bus and D-Bus have access to the same memory components: Flash memory (via ACCEL), SRAM1, and FSMC Static MemCtl. So by taking a Harvard architecture and then connecting the I and D buses to the same memory, we turn it into what may as well be called a von Neumann architecture. We can assume that each memory region has the same address on all buses where it can be accessed, because otherwise the datasheet would say otherwise. It's convenient that each piece of memory only has one address. It would be possible to connect the processor so that the instruction at 0x00000000 is different from the data at 0x00000000, but the designers of the STM32F405xx did not do that.

There is a slight difference: the "data CCM" memory cannot be used for instructions as it's only attached to the D-bus. Your memory map does not show "data CCM" below 0x20000000 so I guess on your chip this difference does not exist. However there may be other differences between the I-bus and D-bus.

The ARM Cortex parts are advertised as "Harvard Architecture", but they're really modified Harvard architecture.

Most machines today that call themselves "Harvard Architecture" don't have fully separate memory spaces, and are thus some form of modified Harvard.

Many programs need the ability to use hard-coded constants within them. For example, to perform an operation like "x=12345" (in just about any common language), one needs a means of getting the number 12345 into a register. There are at least four approaches by which this may be accomplished:

While most of these approaches would work just fine with unrelated code and data address spaces, the ARM was designed approach #3 which requires the ability to place and load arbitrary constants at addresses which are located among the addressed where code will be placed and executed.

Not the answer you're looking for? Browse other questions tagged microcontroller memory computer-architecture cortex-m architecture or ask your own question.