How is power consumed by an induction motor calculated based on speed (from a VFD) and torque induced by the rotor shaft?

I've been tasked with carrying out some design improvements on my company's production floor.

As part of the design improvement, the single phase signal will be supplied to a variable frequency drive, whose output will be fed into the induction motor. The idea is to control speed by changing frequency using VFD as opposed to a constant 60 Hz frequency previously.

My question is with how to estimate the power being consumed by the induction motor. At any time, if the conveyor belt has many items moving through it, this means greater load and the motor has to induce more torque, thus more power consumed?

What I am trying to do is, is to minimize the power consumption of the motor. If the conveyor has few items on it, this means a smaller load on the motor, so the frequency input to the motor will be smaller causing lower motor RPM speed, and this is efficient power wise. Is this correct?

Similarly, if the conveyor has many items moving through it, this is a greater load on the motor, so the frequency input to the motor will be higher causing higher RPM speed. Is this also efficient power-wise?

FYI I'll be controlling the frequency output of the VFD using a microcontroller and I already have that figured out.

I just wanted to know if I have the right idea, and to help understand better how the rotating speed of the shaft and the torque produced due to load, influence the power consumption of the motor.

How is power consumed by an induction motor calculated based on speed (from a VFD) and torque induced by the rotor shaft?

The mechanical power is torque multiplied by rotational speed. If the torque is given in newton-meters and the speed in radians per second, that is all there is to it. If some other units are used, the result must be multiplied by a constant determined by the units.

The electric power required is the mechanical output power delivered to the mechanical load multiplied by the efficiency of the motor and by the efficiency to the VFD. Both the motor and the VFD will likely have published efficiency ratings for operation at rated speed and load. In addition, the motor efficiency rating will be based on direct connection to a sine-wave AC source. Adjustment factors will need to be used to account for actual operating conditions. The VFD manufacturer may have adjustment factors to be used for estimating purposes.

The idea that energy can be saved by reducing the speed of the conveyor to the minimum required for the process is generally correct. However, you are moving the same total mass over the same distance, against the same frictional force. You need to think about energy rather than power. The aerodynamic drag will be less, but that may not be very significant.

Changing the motor to a 3-phase motor will result in increased efficiency, but the added losses of a VFD will reduce that increase. The most efficient operation may be to let the load accumulate with the conveyer shut off then move a batch at full speed.

A project like this requires carefully analyzing all of the details. What is the most efficient operation of the entire assembly line both in terms of energy and in terms of human labor?

Here's my answer, without getting into the problems of VFD control of a single phase motor and the pros and cons of varying the conveyor speed in an assembly line.

The 'speed vs power' and 'speed vs torque' curves of a motor are shown below. 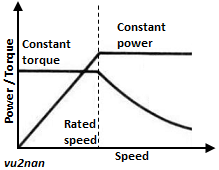 Energy savings would be possible should working speeds be prevalent in the constant torque zone.

Not the answer you're looking for? Browse other questions tagged induction-motor torque power-consumption vfd rpm or ask your own question.