We have setup a solar stairwell project at home, using LED and salvaged batteries and this is what it looks like: 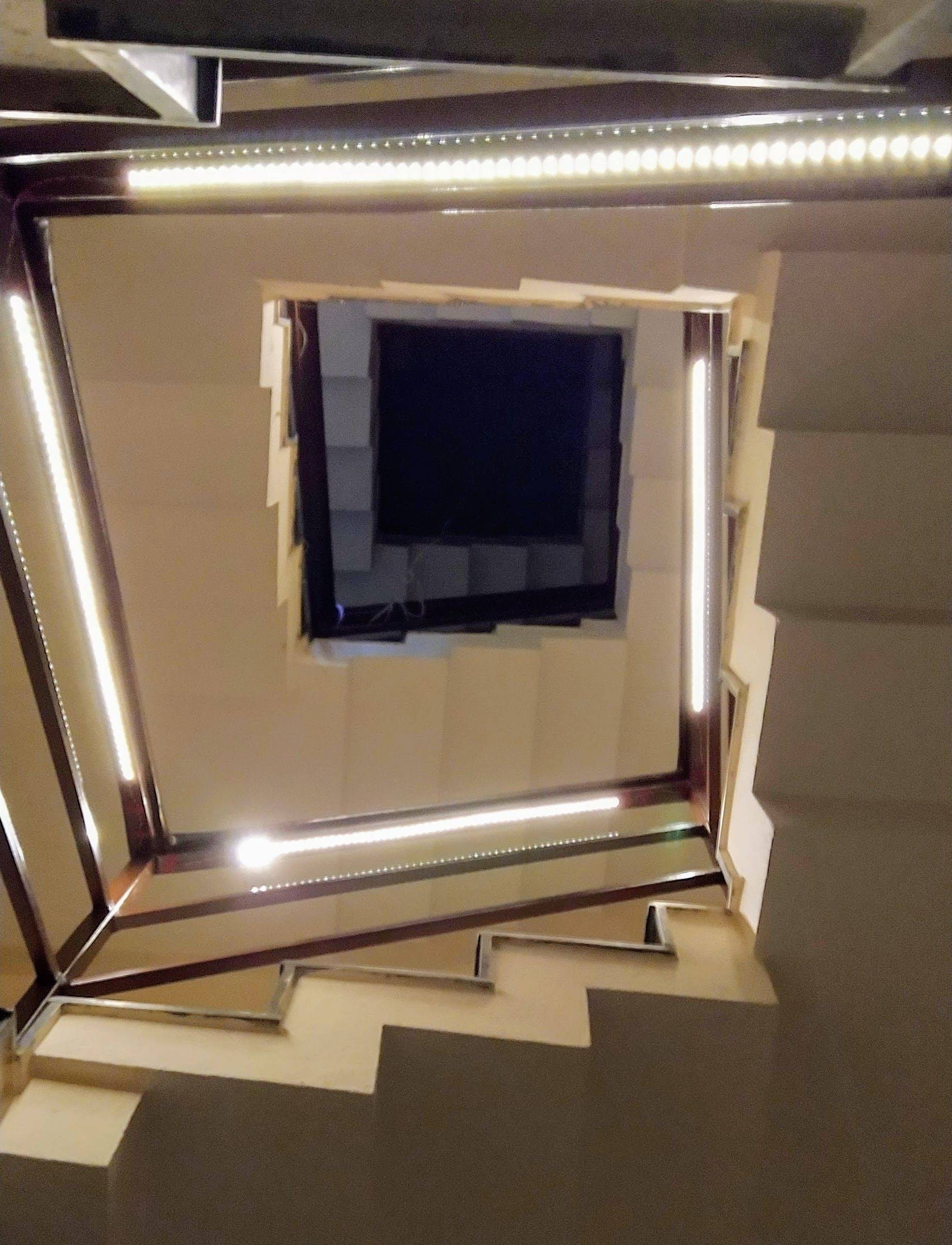 However it may look, the circuit can be oversimplified to:

i.e., it's a battery at the top of my house, ( which is charged using solar power ) and all the LEDs run to the bottom of the house with all of them staying in a parallel configuration.

As you might have guessed, we did not have sufficient brightness at the end of the stairwell. The voltage at the bottom of the stairwell is around 8V. So, when we found another salvageable battery yesterday, we connected it to the stairwell, and it worked well.

However, we wanted to operate the whole stairwell using only a single switch, so I came up with an idea of using a relay to turn on the 2nd battery downstairs but I can't think of anyway to turn it off using the same switch upstairs, as it is creating a sort of feedback loop.

I used a 5V relay at the yellow wires as it was the only thing lying around in my house. I'm fairly certain that the blue section is causing a feedback loop, but I've already spent a whole night to think of way to solve it.

Both the batteries are heavy, so I cannot move them, they must remain upstairs and downstairs as I don't want to clog my stairwell. Since it's a stairwell, I can only add very minimal circuit in the middle as it's very difficult to work there, but if it's impossible to do so without tampering in the middle, I would live with it.

Apologies for the verbosity of my question, I'm pretty sure that someone from the industry might have faced this problem before and have a solution at hand. I'm just an enthusiast with no proper industry training and couldn't search for this problem precisely online.

All help would be appreciated. 😀

The lights look great! I have done similar things in my house. Is it possible to increase the voltage, if not ok. In my proposed solution the increase in voltage will reduce the current in the wire which I assume is sized properly for the currents involved. If you do not know please check, it could be a fire hazard. In either case I would then place a small sepic converters at each lamp or so? (suggest setting them at 11V) or less. I use them as they are inexpensive and work great.

These converters would be staged every few lights, requiring fewer of them. This approach would allow you to run them without the aux battery. The biggest problem would be how to hide them.

When you wire the converters starting at the beginning (solar/switch side) at each light or so you would cut the wire and insert the converter so it then powers everything downstream. A trick that may save you a lot of grief is by lowering the voltage to each light you will dramatically reduces its current requirement while increase its life exponentially. Try about 11V for a 12V light, the brightness will not change that much but the current will.

You could incorporate a wireless switch pair and have switches at both ends of the stairs.

If you're willing to add another wire from end-to-end and a diode, you can feed both batteries into all of the LEDs, as so:

Not the answer you're looking for? Browse other questions tagged circuit-analysis circuit-design switches relay or ask your own question.