Can an opamp have a negative gain?

I have a school excercise which I don't fully understand. The excercise is that you build an opamp circuit with a negative gain, -40 and a bandwidth of 100KHz. The gain-bandwidth product is 1000 000. 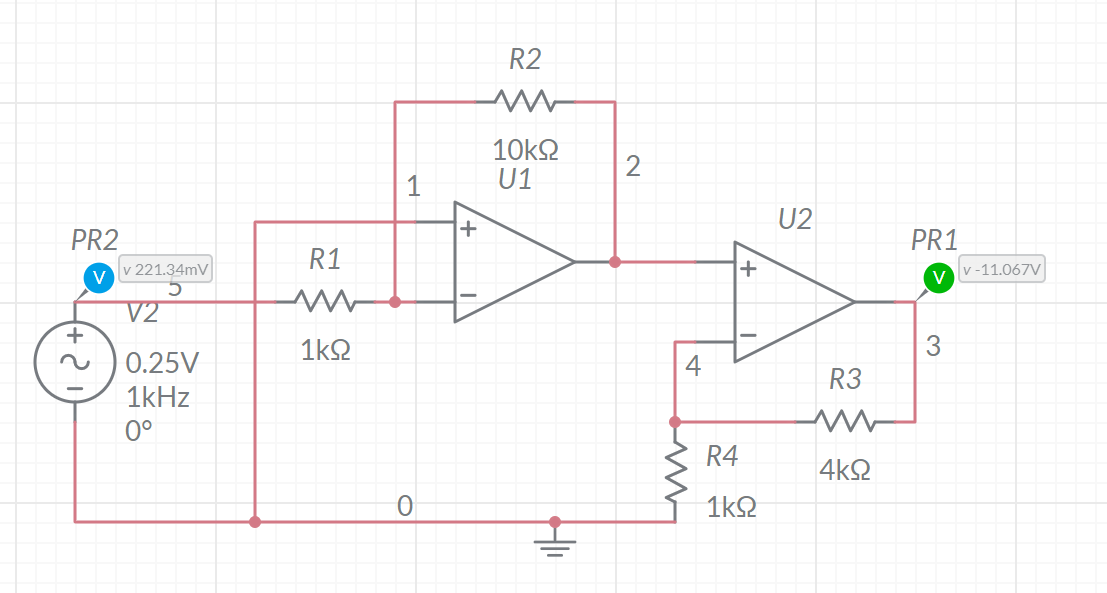 Am I doing something wrong here or is it correct? I just don't really understand it. The gains for each amplifier should be correct.

The term "negative gain" can be ambiguous. It could mean "attenuation", and it could also mean amplification but with reversal of polarity.

If a gain is given the units of decibels, then, almost certainly, a negative gain, in this case means attenuation.

If the gain is given as a simple muliplicative factor, then a negative gain is most probably an amplification with a reversal of polarity.

When you describe the gain as a combination of a gain of 10 (note: no decibels mentioned!) combined with a gain of -4 (again no mention of decibels), then what is most certainly meant is an amplification of the signal with a reversal of polarity. That is why your circuit gives an amplified and not an attenuated signal as output.

Not the answer you're looking for? Browse other questions tagged operational-amplifier basic or ask your own question.

2
Opamp, Amplify square wave or video
2
Measuring Bandwidth of a 1e10 gain TIA
0
Practical Opamp integrator problem
3
Is there a technical reason why you might use a two inverting amplifiers instead of a single non-inverting amplifier?
0
How to correctly wire LF356 JFET Opamp as amplifier?
0
Wrongly documented TI LM324 unity-gain bandwidth?
11
Expected and actual unity gain bandwidth LM324N
0
Question on the close loop gain and bandwidth of this OpAmp configuration
0
Why is the noise gain these opamps 500? I feel it should be 250