I've been messing around with a robot kit from Parallax (the BOE Shield Kit), which has a 5xAA (7.2 V?) power source. The BOE shield includes its own 5 V regulator, which is used to control servos that in turn spin the wheels of the robot. The regulator is rated for up to 1 A of regulated power.

However, when the Raspberry Pi is using Wi-Fi heavily (I ran 'apt-get update' as a proof of concept), and I start turning the servos, the Raspberry Pi resets. I'm assuming it detected an undervolt condition and rebooted to protect itself.

Would a decoupling capacitor across the Raspberry Pi's inputs work to overcome these periods of "startup" servo load? Something like this: 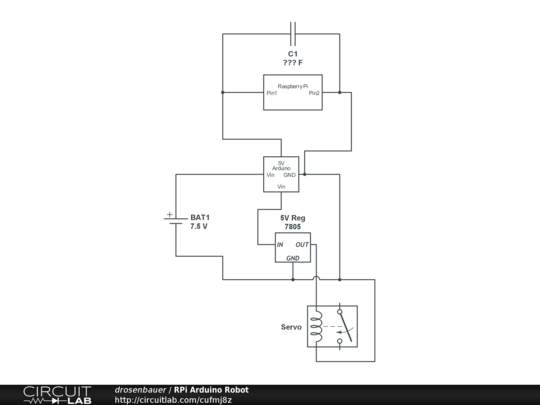 If so, what type and size of capacitor should I use for this? Does it make a difference how far from the Raspberry Pi the capacitor is placed (I don't really want to solder one directly to the Pi)?

(Yes, I know, I used a relay symbol to depict the servo in the CircuitLab diagram, but they didn't have a "servo" block. Just imagine it as "thing that draws a lot of current for a very short time".)

A bypass capacitor on the input to the RPi might be enough, but it depends on the duration and magnitude of the dips caused by servos.

I would use an oscilloscope to investigate the dips. If they are very short (us) then I would add arbitrary caps (100uF, 1000uF) and re-test.

Another solution would be to try and confine those peak draw pulses by adding a diode from the battery to the Arduino, then connecting the Vin to the 5V regulator to before the diode. This way, transients won't pull from the input caps of Arduino, only from the battery.

WiFi usually requires around 200mA in RX and TX, but the peaks can reach 1A or more. Adding bypass capacitor might help if these dips are momentary, but if the regulator struggles to provide the required average current, a beefed up regulator might be required.

A decoupling capacitor on the RPi will certainly help. Though you will want to get as close as possible to the supply pins. Use an electrolytic and try and find one with the lowest ESR possible.

Analog Devices has some good recommendations:

Adding a bulk storage cap to the servo would also be a good idea. Again look for low ESR and a value in the thousands of μF.

I had a similar problem with an Arduino powered by 4 NiMH batteries that also drove two servos. Whenever the servos would start or change direction, it would reset the Arduino. I solved the problem by placing a large 4300uF electrolytic cap near the Arduino's Vin & Ground. After using the cap, the arduino never reset no matter what the servo's did.

Really though, you should use a scope and look at the line. It could be noise (and not a voltage drop) is causing the Rpi to reset. In that case, you'd want to use small filter capacitors (ie 0.1uf) on each servo motor to try an filter the noise.

Not the answer you're looking for? Browse other questions tagged arduino raspberry-pi decoupling-capacitor undervoltage mobile-robot or ask your own question.

3
How do I determine the maximum amp output of a battery pack?

5
RC Car mounted Raspberry Pi runs out of juice
0
Decoupling a power supply
0
Sharing same battery with two dc motors and two servos
0
power 5v with 6v (4x1.5v batteries)
0
Converting 5V from Raspberry Pi to 3.3V at MCP23017
3
Servo interfering with 433MHz RF
0
How to reduce noise in this circuit?
1
Can I connect a Raspberry Pi and a servo shield to a single power supply?