Why does the polarity of voltage Vds have to be reversed for p-Channel JFET in comparison to n-Channel JFET?

which were measured in this measure arrangement.

I would have expected voltage to be able to be applied in the opposing direction as well, but in this case I can not reproduce the characteristic given above. If anybody maybe knows why voltage can only be applied in one certain direction in JFET, I am very garteful for any help.

You need to look at the silicon stack up for P-channel and N-channel JFETs. 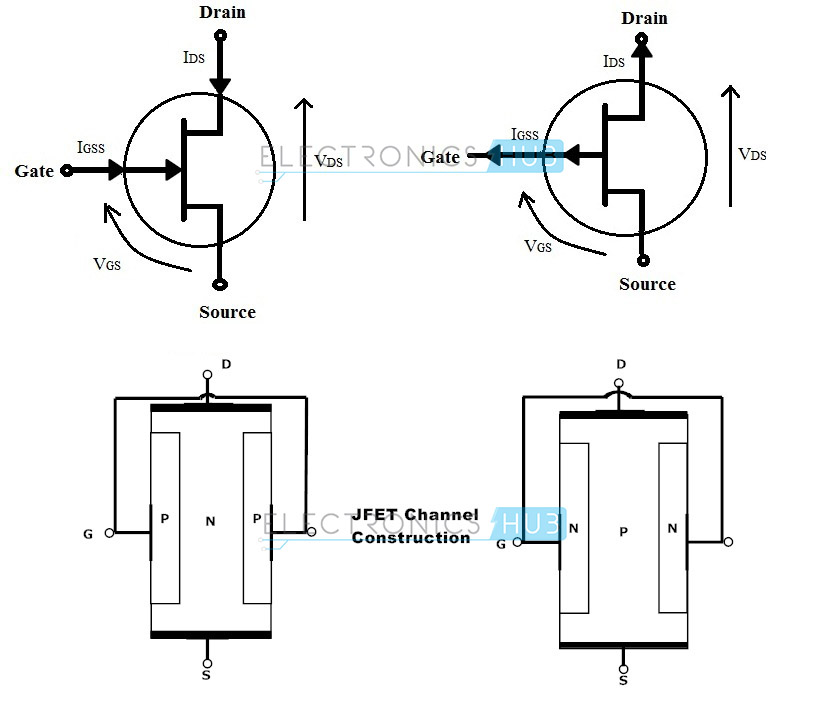 Also notice that the JFETs is symmetrical so source and drain are interchangeable. So how do you consistently know which end is supposed to be the source?

By convention the source is labelled to be whichever the reference terminal for the gate, just like a MOSFET. Unlike a MOSFET it's not immediately evident which end it is because the device is symmetrical and would work either way. So it's not specific to the construction of the device. Instead, it's specific to the way the device is used in the circuit. You know which end is the reference terminal for the gate because it's the end that forms a reverse biased PN junction with the center slab of silicon (which is the gate, obviously).

This in turn causes the relative voltage between the drain-source assignments to be flipped between P-channel and N-channel JFET.

5
Is operating point calculation the same for P-JFET and N-JFET with voltage-divider bias?
0
P-channel JFET gate voltage
0
In an n-channel JFET, why isn't the formation of depletion layer symmetrical?
0
Why does the output voltage of my linear gain amplifier depend on the JFET gate voltage?
0
In jfet, why Vgs is half the cutoff voltage when the source resistor is same as the ohmic resistance of the jfet?
1
Describing the process of pinching off of a n channel in JFET
1
n-channel JFET: importance of gate drain voltage (Vgd) and validity of negative drain source voltage (Vds)