How to properly couple DC in this biased headphone amplifier design on power-up?

I am a self-study noob to electronics (and audio electronics) but diligently learning every day :) Some things I understand well, others I'm fuzzy on.

This device is a headphone amplifier using NE5532 opamps in single-supply biased mode, biased with +6V DC. My understanding is that it is a bad thing to push any amount of DC through headphones whatsoever, so that's why one must put the coupling capacitors C25 and C26 on the output. 1000uF is a fairly large cap, but the value was chosen to maximize the frequency response of the audible range from the HPF it produces with the headphone impedance (32, 90, and 320 ohms). I was testing this completed design today and noticed that, on first power-on of the device, the output capacitors C25 and C26 have to charge up before they are able to fully block DC. This is expected, but for a long ~4-5 second window (this was wrong, the length of time is much shorter, see edit), there is 2-3V DC flowing through the output into the headphones that is reduced over time. That raises a warning flag to me that something has to be done before the user can safely plug in the headphones!

First thing that comes to mind is to reduce the output capacitance so the DC blocking state is reached more quickly. But, this would modify the high-pass to attenuate low bass notes significantly. Is there another more common solution for how to address this problem? Surely this can't be ignored and left as-is, right?

For reference, I mostly modified this design for an NE5532-based headphone amplifier from the Phil's Lab YT channel, which is based on the Doug Self NE5532 headphone amp. My design is more-or-less the same as the Phil's Lab design except it has reduced buffering on the output. https://www.youtube.com/watch?v=Z2GUoi63pJs

Oh, and if you see other obvious issues in the schematic as you're viewing please comment on them! This is my first ever non-trivial circuit and I'm sure I've messed up quite a lot of things.

EDIT: In the original question, I had been testing the charge time without a load. With a 32 or 250 ohm load, the RC charge time is very fast, but the length of time it's taking to charge without load is due to the high R38 and R39 values (10K). I also fear that quick burst of current might pop a headphone speaker. 10K was chosen to not severely impact the output impedance for the headphones when a load is attached, but that value is pretty high for even a 32 ohm load. Reducing that value lets the capacitor charge more quickly to a steady state with no load attached, but it doesn't entirely solve the problem as there is still a non-zero amount of DC passing through at the start. 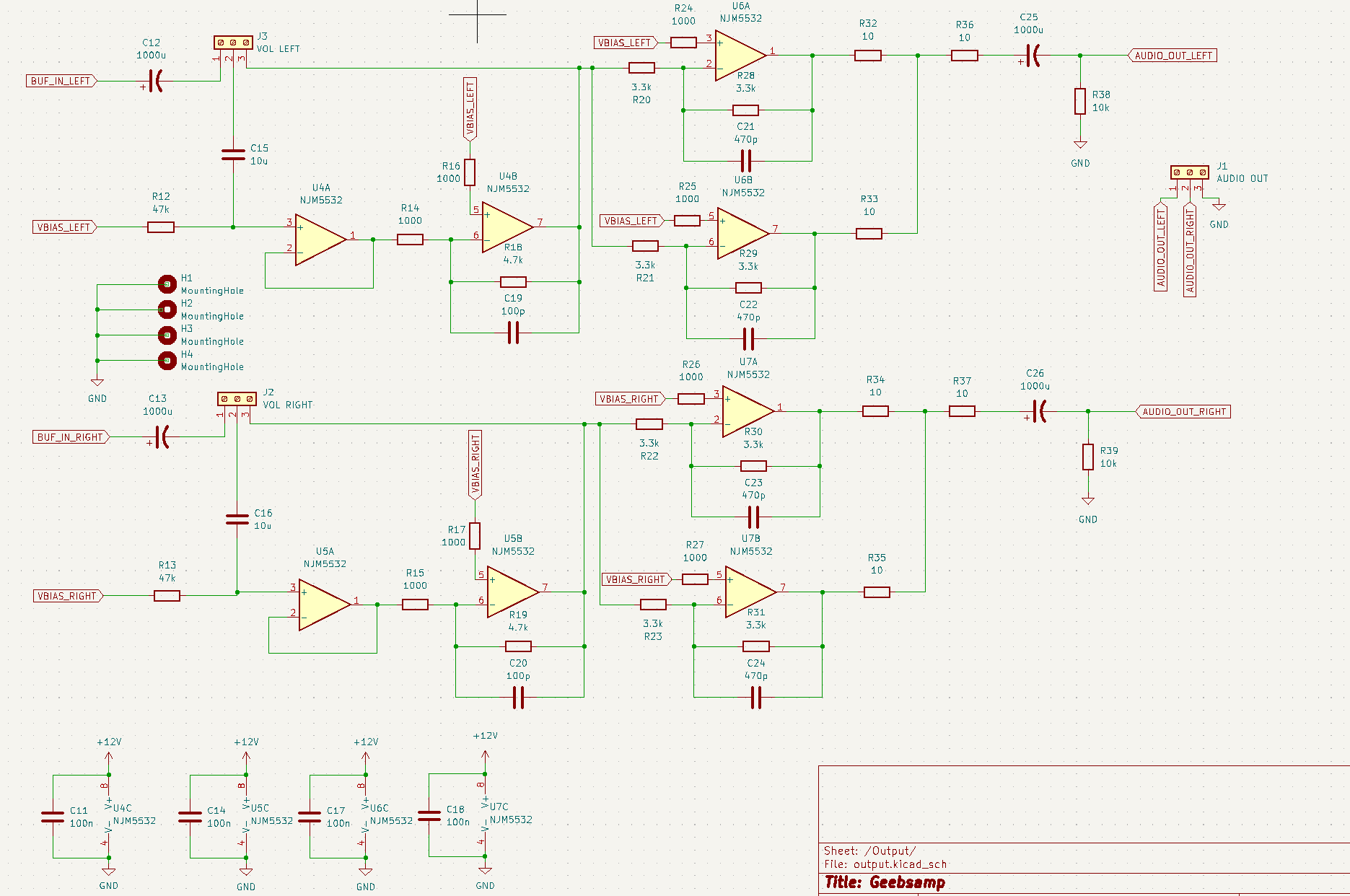 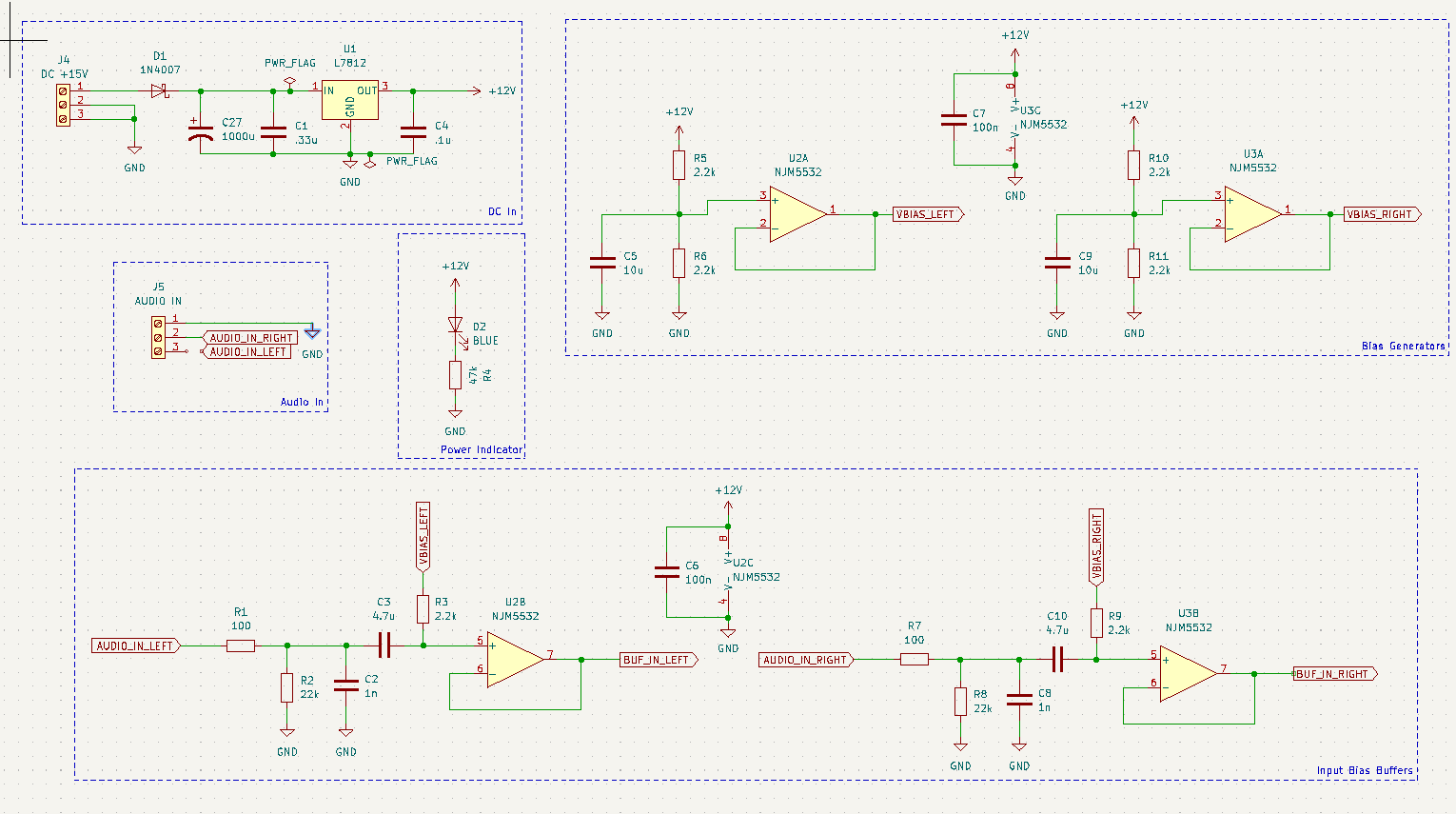 I don't think you need worry that the charging current pulse when you switch the amplifier on will damage the headphones. However, if you are still worried, add a 6 V regulator L7806 to the power supply, using a 220µF cap at its output and connect your headphone 'earth' to the 6 V output.

Not the answer you're looking for? Browse other questions tagged amplifier audio coupling headphones or ask your own question.

1
I need circuit help with headphone amplifier 'thump' and other issues
2
How does headphone volume correspond to driver excursion?
0
Loud hum and buzz... I think I know why but I don't know how to solve
2
How to wire headphone switch correctly in audio amp (LM4875) circuit?
2
Identifying Noise in 12AU7 Based Headphone Amplifier
4
How do I appropriately power a headphone amplifier and where do I place the volume regulating potentiometers?
1
emitter follower oscillation cured by adding base input resistor?
0
Is it possible to run a small circut off the power that is output from a unpowered headphone/speaker?
0
Capacitor and Resistor Values on Headphone Amp Out (highpass filter)