What is the voltage value of fully charged (and what is the value of fully discharged, out of curiosity) battery (1s li-ion) in common devices such as smartphone? Of course li ion provide ability to being charged up to 4.2/4.25V, but staying at this level for longer period (at least couple of hours (?)) degrades significantly battery life.

About the discharge cycles: 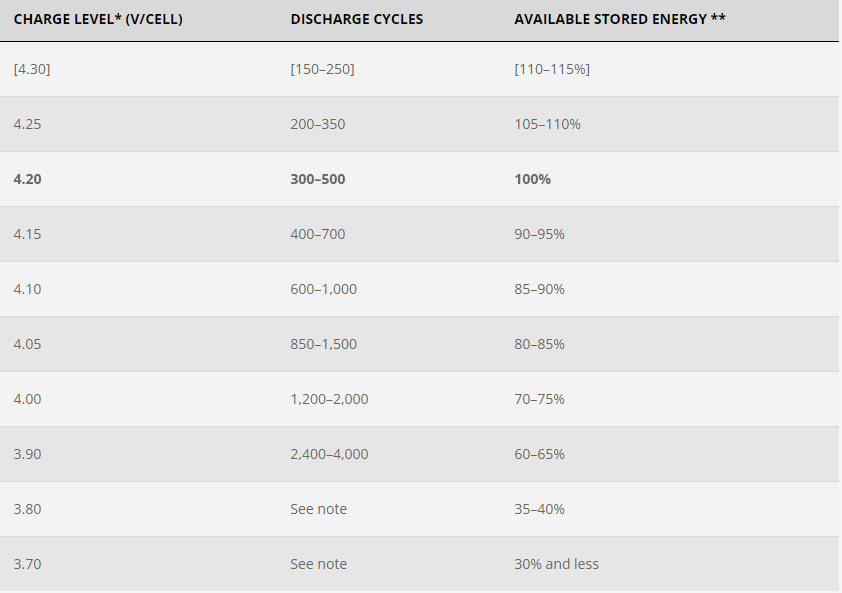 power-supply batteries lithium-ion
Share
edited May 5 at 7:05
Bratw
asked May 5 at 6:51

This will vary wildly with device models and various li-ion chemistries. Designers will always tailor the cutoff voltage to what is needed for the product: Performance or longevity? Also, there seem to be many different "li-ion" chemistries to choose from.

For example, have you noticed there used to be two types of cells (3.6V vs 3.7V nominal) for old Nokia phones?

For some anecdotal evidence. My old phone (K750i) used to terminate charge at 4.15V (it used li-pol cell, though). After 8 years, the old cell had comparable capacity as a newly purchased cell (which might have been in storage for all that time?) The daily use had almost no effect on it. In comparison, my laptop (Acer T3810) was keeping cells at 4.3V when 100%, restarting charge at 95% (Not sure, but I think 4.25V). The battery was dead within 4 years of nonstop use, with only about 50 cycles used. The frequent charging killed it.

Update: Out of curiosity, I measured other devices. Current phone (android) charged to only 80% leaves the cell at 4.10V. Makita charger terminates a 18V Li-ion battery charge at 20.59V (4.12V per cell).

Not the answer you're looking for? Browse other questions tagged power-supply batteries lithium-ion or ask your own question.

21
How to safely dispose of a damaged lithium ion battery?
1
Why fully cycle Li-Ion laptop battery?
0
Can I use the Coulomb Counting Method to estimate the SOC of a battery being charged by PV panels?
0
I bought a Li-ion battery which was deeply discharged, now what?
2
Maintaining health of Lithium-ion battery
5
Why does this small lithium ion battery have a different voltage than larger lithium ion cells?