I have a question about the skin effect on inductors, I would like to know why the skin effect will reduce the inductance? You could see from the below figure, in the high frequency the inductance was reduced, but the resistance will be increased. Could someone give me some suggestions, thanks? 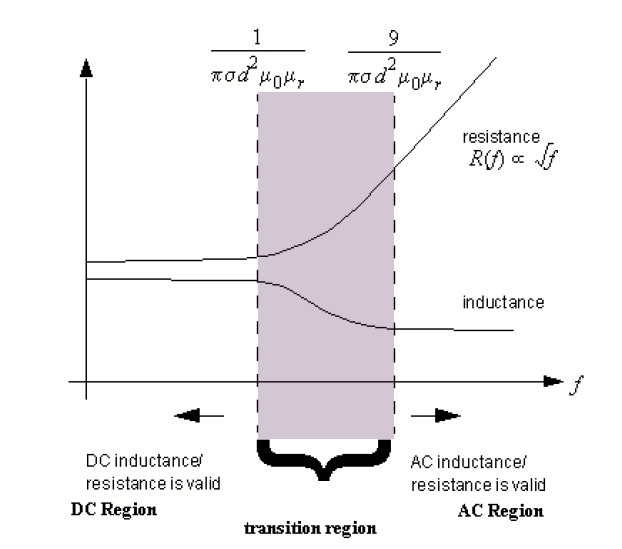 In addition to the field explanation, there's a very basic argument from just the fact that an inductor is a real 2-terminal element: as a consequence of the impedance being analytical, the real and complex elements obey Kramers-Kronig relations. Basically, a lossy inductance is necessarily a decreasing inductance; the impedance is still going up with frequency, but a little slower than proportionally so (\$\left|Z\right| < j \omega L\$). The amount by which it's slower, gives the resistance fraction. (For example, if R = X_L, the slope (on log-log plot) is half, or Z ~ sqrt(F), a diffusion element.)

If impedance is rising faster than proportional (or falling faster than inversely for capacitors), it can only happen within a narrow band (approaching a resonance), as is the case near SRF (self resonant frequency).

(This is not a complete description of what impedance can do as a function of frequency, but is sufficient for commercial inductors, which can be modeled as a lossy inductor with some capacitance to cover DC to a bit beyond SRF, or including other more complex behavior at high frequencies which may not be very important to model anyway.)

Not the answer you're looking for? Browse other questions tagged switch-mode-power-supply inductor inductance or ask your own question.

2
Would using litz wire for an inductor change the inductance compared to regular wire?
1
How do I understand the effect when the load current is over the inductor's saturation current?
8
If you have two identical but oppositely wound inductors does the inductance effectively cancel?
1
Are there any effects on capacitance and inductance when operating at audio-frequency (i.e. 1kHz - 20kHz)?
0
Air gap variation between metal target and planar Inductor coil changes the coil inductance and oscillating signal's frequency & amplitude?
1
Effect of core losses on inductance in high-frequency LC circuit?
0
How do skin-effect and proximity-effect behave for flat-conductor power inductors?
1
Can I use common mode power line choke as 1:1 transformer in isolated buck-boost switched mode power supply at 20 - 100 kHz?
1
Flyback leakage inductance effect