How can negative feedback reduce distortion if A*beta>>1?

I have read that negative feedback reduces distortion (frequency, amplitude, phase) because if \$A \times beta >>1\$ the transfer gain will be \$(A/(1+A*beta)) = A/A \times beta=1/beta\$. Which means that the over all gain will be independent of the basic amplifer gain and if the feedback network have just resistive elements, there will be reduced amount of distortions.

Doesn't the condition of stability state that \$A \times beta\$ should be less than 1 otherwise it will be unstable. Does that mean we will get reduced distortion but on unstable condition?

You can model a feedback system with distortion by adding a distortion voltage to the output, done here via adder X3 which adds a "Disto" voltage.

\$ D \$ is the open loop distortion added by the amp, referenced to the output.

Nope, that's not the right condition.

Here's a pic from an appnote. Suppose we have this opamp and wire it with a feedback network giving the gain drawn in green: 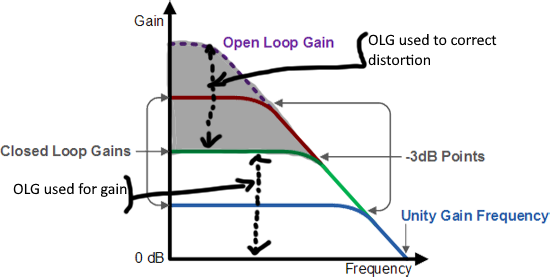 An intuitive way to grasp the concept is that, at a given frequency, the opamp gives you a value of open loop gain Aol. This is your budget, and you can spend it either on the gain you want your circuit to achieve, or on distortion reduction, but not both.

This means the opamp should be chosen carefully, and if \$ A_{ol} \beta \$ is low, more linear circuits that generate lower distortion to begin with can be useful.

Basically, with a given fixed opamp, more gain usually means more distortion. If the opamp is discrete and is designed for the application, or if a decompensated opamp is used, then the unity gain frequency can be adjusted, and \$ Aol \$ can be boosted without compromising stability for the specific value of \$ \beta \$ chosen. In this case, distortion does not increase with increasing gain, as long as the gain is not variable.

1+betaA is referred to as the return difference, improvement factor, desensitivity factor or feedback factor. It is the factor by which the gain of the amplifier is reduced when the loop is closed and feedback is applied.

For the amplifier to be theoretically stable, the loop gain (-betaA) must have a gain less than 1 at the frequency where the loop phase is -360 degrees.

In a practical amplifier, a margin of safety is included (phase margin) and the amplifier's compensation would be designed such that the loop phase is significantly less than -360 degrees at the frequency where the magnitude of the loop gain is equal to 1 (unity) or put another way, the loop gain would be significantly less than 1 (unity) at the frequency where the loop phase is equal to -360 degrees.

Quote: "Doesn't the condition of stability state that A×beta should be less than 1 otherwise it will be unstable. Does that mean we will get reduced distortion but on unstable condition?"

Yes - in general, that´s true. But, of course, not for the price of instability.

This is not a surprise because "everything" in electronics is the result of a trade-off between conflicting properties. In this case: A degradation of stability margin is the price for a improved linearity.

Note: Negative feedback has many positive and desired effects (results), but it always reduces the stability margin. This must be accepted and requires good and careful design strategies.

However, a good engineer will always find an "optimum" trade-off between gain, linearity and stability margin without the danger of an "unstable condition".

A canonical block diagram of the classic negative control loop is this: -

\$r\$ is the reference, \$y\$ is the output and \$e\$ is the error. We want to minimize the error (ideally to zero) at steady state. The open loop gain of the system is \$A\beta\$. The transfer function from reference to error is $$\frac{e}{r}=\frac{1}{A\beta+1} $$ Notice that if \$A\beta\$ is very large, then the error transfer function goes to zero. In other words, if you have high open loop gain, then the error will be small for certain input signals (for example a step input).

Doesn't the condition of stability state that A×beta should be less than 1 otherwise it will be unstable.

A main property of any system with negative feedback is that it copies the inverse behavior of the feedback network. Thus, if a (linear) voltage divider with transfer ratio K = R2/(R1 + R2) < 1 is connected in the feedback loop, the whole circuit will behave as a (linear) non-inverting amplifier with K = (R1 + R2)/R2 > 1. From this viewpoint, a non-inverting amplifier is a "reversed voltage divider" (see also my RG question).

So the exact value of the op-amp gain, its linearity, temperature, frequency dependence, etc. does not matter. The only important thing is to have too much gain.

We can call this "surplus principle" and we can see it all around us because we achieve our goals through the negative feedback principle. We act by constantly comparing what has been achieved with our goal until we make them equal.

If we have money, energy, power, intelligence, motivation, etc. in excess, we can solve every problem in life. The exact value of these qualities does not matter much; it is only important that they are in sufficient surplus to overcome any disturbances (including nonlinearity or distortion).

Not the answer you're looking for? Browse other questions tagged operational-amplifier amplifier power-electronics feedback negative-feedback or ask your own question.